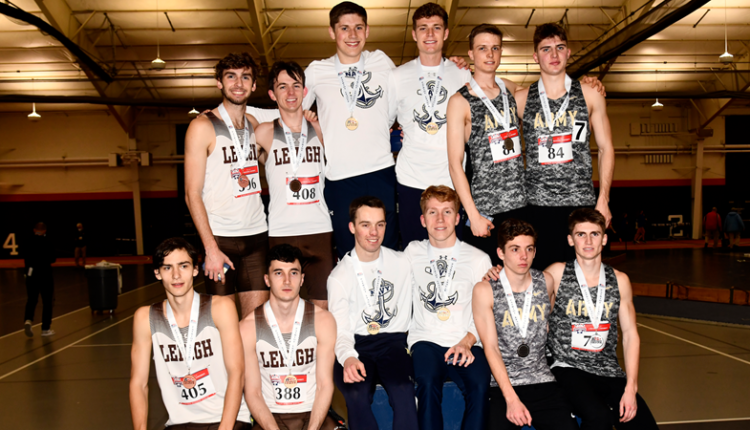 Lehigh In 5th After Day One of Patriot League Championships

LEWISBURG, Pa. – The Lehigh men’s track and field team found itself in fifth place following the first day of competition at the Patriot League Championships on Saturday at Bucknell. The 4×800 relay team and junior Louis Logsdail earned points for Lehigh.

“Louis came out of the championship with a PR, eighth all-time and two points for the team,” said head coach Matt Utesch. “He jumped really well today and we’re all really proud of him.”

“The whole relay team ended up being fresh and it was special to see the plan come together,” said Utesch. “They were never out of the top three the entire race. They went right to the top three and ran there the entire time.”

Senior Kyle Burke and junior Jacob Martinez might not have competed in the 4×800 relay like they normally would, but they found success on their own on Saturday. In the 800m, Burke finished second with a time of 1:52.54 while Martinez finished seventh with a time of 1:53.30. Both Mountain Hawks advanced to the 800m finals on Sunday.

The Mountain Hawks sent several first-years to Lewisburg to make their Patriot League Championship debut. Leading the way was Jonathan Bennett, who advanced to the finals in two races. Bennett finished fifth in 60m hurdles (8.16) and eighth in the 60m where he tied his PR of 6.95.

“Jonathan is another freshman phenom who advanced in two finals in his championship debut,” said Utesch. “He had great performances today and has some left in the tank for tomorrow.”

On the multis side, first-year Gideon Coprivnicar showed no signs of nerves in his Patriot League Championship debut. Coprivnicar earned a PR in all four events he competed in. He started off with a PR in the 60m (7.40) before earning three more PRs in the long jump (6.08m), shot put (10.54m) and high jump (1.75m). ).

Day two of the Patriot League Championship will resume on Sunday at 11 am The men’s high jump will kick things off on the field side while the men’s mile will begin track competition at 12:10 pm

Track events for the second day of competition will be streamed here and live results can be found here.

A Dog Day at the Dentist’s: North Carolina Regulates Pups in Dentistry