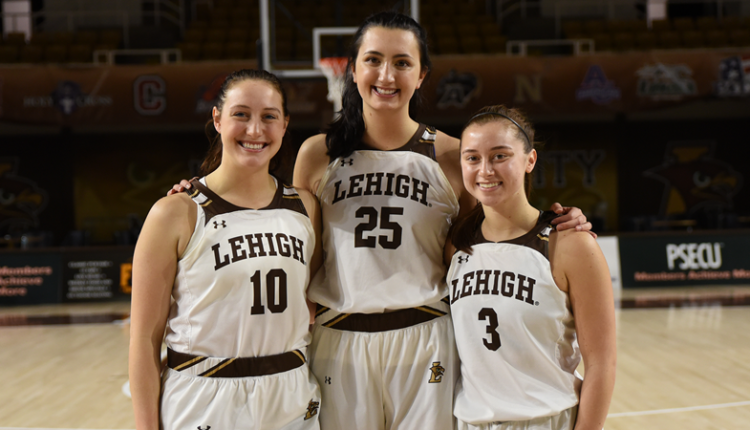 BETHLEHEM, Pa. – The Lehigh women’s basketball team hosts Lafayette in The Rivalry presented by Lehigh Valley Orthopedic Institute Saturday at 7 pm and also for Senior Night, where the team will honor seniors Emma Grothaus, Clair Steele and Megan Walker with a pre-game ceremony.

It’s coming down to the wire for Lehigh, with just two games to go in the regular season and still an opportunity to rise from its current fifth-place ranking. After falling to American in both games down in DC earlier this week, the right to the Patriot League Regular Season title this season is officially out of the question, but the Mountain Hawks sit just a game behind three teams for second-place in the standings .

Despite a strong first half, leading 18-8 after one and 30-27 at halftime, Lehigh struggled in the second half and fell 61-52 for the second consecutive game at Bender Arena.

Frannie Hottinger returned the form in the second game against the Eagles, scoring a game-high 18 points with six rebounds and one steal on 50 percent shooting, while Emma Grothaus registered a 13-point, 10-rebound double-double, her eighth of the season. She also finished with three blocks and two steals.

Grothaus has an opportunity to reach the 1,000-point milestone on Saturday night, sitting just 20 points shy of the mark at 980 for her career. She’s also grabbed a total of 649 rebounds, which puts her ninth, 30 from passing Tricia Smith ’10 for eighth at 679.

Lafayette is coming off perhaps its best win of the season so far after knocking off second place Boston University on Wednesday in Easton for the team’s Senior Night.

That win is coming off a highly-contested loss vs. Bucknell on Saturday in which the Leopards made a fourth-quarter comeback to force overtime before running out of gas in the 68-60 defeat to the Bison.

Makalya Andrews led the Leopards Wednesday with 18 points and eight rebounds, adding two assists and a block in 37 minutes against the Terriers. Jess Booth added 15 points with four assists, going a perfect 8-for-8 from the free throw line, while Makalia Wilson added 11 points and nine boards and Abby Antognoli led the bench unit with nine points and four rebounds.

Booth leads Lafayette offensively this season at 11.0 points per game, along with 4.0 assists, 3.3 rebounds and 1.3 steals in 31.2 minutes per game. Andrews is averaging 10.5 points and 5.4 rebounds, while Abby Antognoli is pacing hte Leopards with 8.6 points and 2.3 rebounds, tallying 2.5 assists.

The Leopards are looking for two victories to close out the season with the hopes of maintaining a hold on the No. 7 seed in the Patriot League Tournament to host the No. 10 (currently Loyola (Md.)) in a first-round matchup next Saturday.

It’s been 102 matchups all-time in the storied rivalry between Lehigh and Lafayette. The Mountain Hawks have the slight edge, 56-46.

The two teams played four times last season with Lehigh taking three of four matchups including both at Kirby Sports Center. The Mountain Hawks are winners of 13 of the last 15 games in the series dating back to Jan 27, 2016, including the first one this season back on Feb 12.

Saturday’s game will be aired live on Service Electric Network Channel 50 with Steve Degler and Traci Cyr on the call, while radio coverage will be provided by Fox Sports Radio 94.7 FM and 1230 AM in Easton with Matt Markus on the play-by-play call .