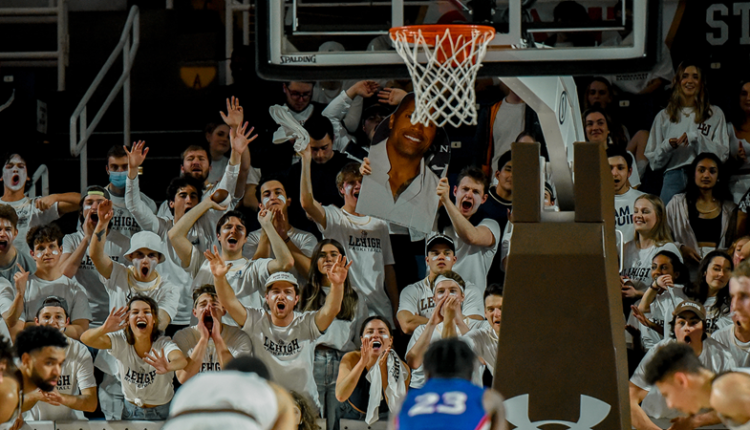 BETHLEHEM, Pa. – The Lehigh men’s basketball team is ready for the second season on Thursday as the fourth-seeded Mountain Hawks host fifth-seeded Army West Point for the Patriot League Quarterfinals Thursday night at Stabler Arena. Opening tipoff is set for 7 pm on ESPN+. After a 4-1 and 6-3 start to league play, the Mountain Hawks finished 3-1 and are entering the Patriot League Tournament on a high note, picking up a dominant 78-58 win at Lafayette on Saturday.

Calling all @LehighU students and fans 🗣🗣🗣 Jalin Sinclair of @LehighMBB has this message for you ahead of the @PatriotLeague Quarterfinals tomorrow night at 7 pm vs. Army. pic.twitter.com/B5AGABgiUY

— Lehigh Sports (@LehighSports) March 3, 2022 Lehigh spoiled the Leopards’ Senior Day by jumping out to a 21-7 lead and they didn’t look back. The Mountain Hawks’ lead swelled to as much as 30 in the second half. Junior Evan Taylor was the story, knocking down his first 10 field goal attempts and finishing 10-of-11 with 23 points. It marked the highest shooting percentage for a Lehigh player with at least 10 makes in Brett Reed’s 15 seasons as Mountain Hawks’ head coach. Taylor’s 10 made field goals tied a career high, while he added nine rebounds – just missing a double-double.

Senior Nic Lynch did get a double-double – his third of the season and seventh of his career – posting 14 points and 11 boards. Classmate Jeameril Wilson had nine points as well, as did first year Tyler Whitney-Sidney – who also added six rebounds and a game-high five assists. On Monday, Whitney-Sidney went on to earn Patriot League Rookie of the Week for the second time this season. He was also named to the All-Rookie Team, as did Keith Higgins Jr. Taylor and Lynch were both named third team All-Patriot League as well.

Following a stretch of four losses in five games, the Mountain Hawks bounced back with home wins over Bucknell and American, and Saturday’s dominant victory at Lafayette. In the end, Lehigh finished in the top four in the league standings, posted a winning league record, and will host a Patriot League Quarterfinal for the sixth time in the last eight seasons. The Mountain Hawks also hosted Loyola in the Patriot League First Round in 2019-20. The last time Lehigh hosted a quarterfinal game in March of 2019, it was also against Army – a 75-70 victory. The Mountain Hawks are 2-3 all-time against the Black Knights in the Patriot League Tournament, also winning in the quarterfinals during Lehigh’s championship run in 2009-10.

Army has had an up-and-down season, beginning Patriot League play 6-2. The Black Knights began February with six straight losses, but rebounded by beating Bucknell at home (73-60) then topping Holy Cross on the road (66-58). In its six straight defeats, five of them came by 10 points or less, including four by four points or fewer. Second team All-Patriot League honoree Jalen Rucker leads Army in scoring (16.8 points per game), which is good for fourth in the league. Patriot League Defensive Player of the Year Josh Caldwell averages 12.1 points and 5.2 rebounds. Army’s other starters have been Charlie Peterson (8.1 points/game), Chris Mann (7.8) and Aaron Duhart (6.9). The Black Knights are fourth in the league in scoring offense (70.2) and fifth in scoring defense (69.7).

Lehigh and Army split the two meetings this season, with each team winning on its home court. In the first game, the Black Knights jumped out to a 39-13 halftime lead. Lehigh turned things around a bit in the second half (scoring 42 points), but it wasn’t enough in a 77-55 loss. Then 19 days later in Stabler Arena, the Mountain Hawks rebounded with an 84-71 victory. That pulled Lehigh within 67-47 in the all-time series. The teams didn’t play last season; Army won both meetings in 2019-20 – 80-79 at Lehigh and 79-66 at Army. Prior to that, the Mountain Hawks had won the previous four. In Lehigh’s last home Patriot League Tournament game, it defeated Army in the 2019 semifinals, erasing a double-figure second-half deficit to win, 75-70. The first-ever meeting between the two sides came in 1906-07, a 26-24 Lehigh victory. Army won the next matchup in 1914-15 by a 19-6 final.

If the Mountain Hawks win on Thursday, they would advance to the Patriot League Semifinals on Sunday – either at No. 1 Colgate or hosting no. 9 Bucknell.