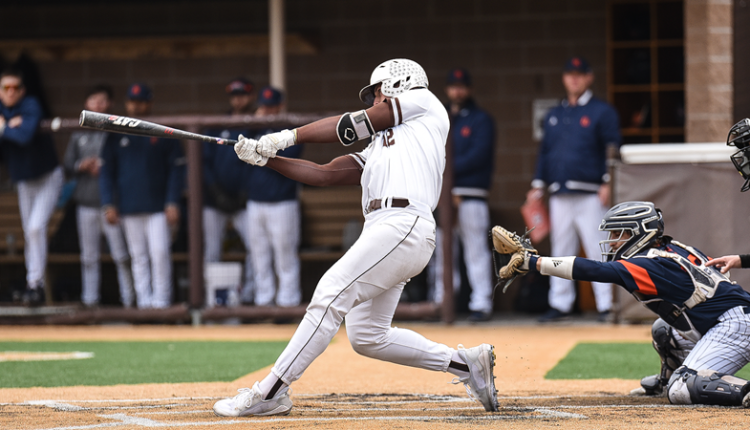 Lehigh gets 5-4 nightcap win over Bucknell in Sunday split

BETHLEHEM, Pa. – Getting out-hit in both ends of the doubleheader by Bucknell Sunday afternoon at J. David Walker Field, the Lehigh baseball team fell, 14-8 in the first game before coming back to take Game 2 by a 5-4 margin. Senior Joe Gorla was excellent in Sunday’s split against the Bison, going 4-for-7 with two doubles, two runs scored and an RBI. He ends up finishing the weekend hitting .538 (7-for-13) with three doubles, a home run and five runs scored in his first four games since missing the first half of the season due to injury. The Mountain Hawks improved to 15-13 overall and 3-5 in Patriot League play through the first two league weekends of the year.

“I think the most impressive thing about today was our performance in the final game of the weekend,” said head coach Sean Leary. “We had our backs against the wall and we’re not an excuse-making team, but I don’t know that I’ve had a situation where we’ve had six different starters go down with injuries. Some of the guys will be out for a short time, some will be a little longer and we got up this morning and two more were added to that list.

“It seemed like it took the wind out of our sails a little bit and then Matt Stamford just put us on his back in Game 2 and got us deep into the ballgame when our bullpen had been used quite a bit in a four-game weekend . We needed him and he came up huge.”

Bucknell tallied 14 runs on 18 hits in the first game of the day en route to the six-run victory, scoring nine amongst the first three frames. A two-run double and an error that scored a run contributed to a trio of runs in the first inning and giving Bucknell an early 3-0 lead.

Adam Retzbach singled to center field in the bottom of the inning, scoring Riley Davis to cut the deficit to 3-1.

Four consecutive runs in the second inning pushed the Bison ahead, 7-1.

— Lehigh Baseball (@LehighBaseball) April 4, 2022 The Mountain Hawks got two runs back on a two-run double courtesy of Gerard Sweeney in the bottom of the second, the first of his two hits on the day. After the Bison took a 9-3 lead heading into the third, Lehigh had productive at-bats in the third and fourth innings, clawing back within 9-7 headlined by Sweeney’s fourth inning solo shot and Retzbach’s RBI single. The Bison went ahead by seven runs after putting up a four-spot in the seventh inning to take a 14-7 lead.

Carlos Torres (1-1) was charged with the loss after going one inning and allowing six runs (four earned) with two strikeouts and a walk. Teddy Tolliver, Val Taddei and Will Grisack all saw action in relief in the defeat.

In Game 2, the Bison struck first on Tyler Dunn’s RBI single through the right side in the top of the second inning, taking an early 1-0 advantage.

The Mountain Hawks took the lead in the bottom of the stanza and never looked back after Gorla started scoring with an RBI double to right field. Tyler Young tallied a double of his own with one down the right field line to score Gorla and take a 2-1 lead.

Lehigh scored two more times in the sixth inning on Young’s sacrifice bunt and Chase Carlson’s RBI single to left field. The Mountain Hawks added insurance in the bottom of the eighth when Young singled to left field to score Retzbach. However, the Bison provided a scare in the ninth when Grant Voytovich homered off of Nick Pave, scoring two runs to come within one, 5-4 before Casey Rother came in to shut the door and earn his second save of the season.

Gorla finished with three hits in the second game while both Retzbach and Young finished with a pair. Young drove in three of Lehigh’s five runs in the victory.

The Mountain Hawks have a non-league tune-up on Tuesday at Saint Joseph’s, taking on the Hawks at 3 pm in Philadelphia for the consolation semifinals of the Liberty Bell Classic.