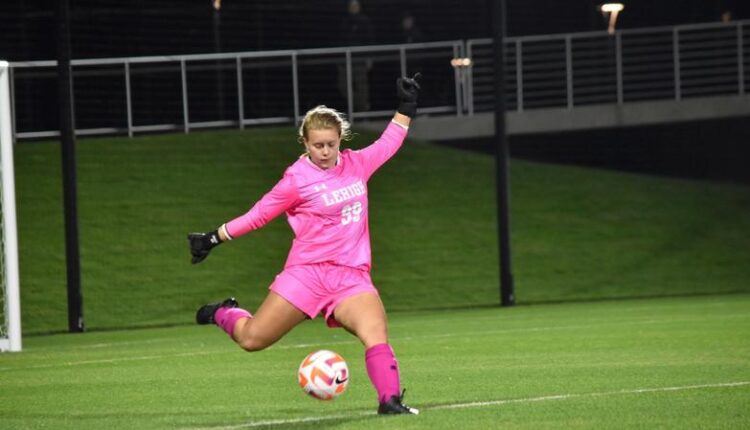 PRINCETON, NJ – The Mountain Hawks spent the second half of the game playing tight defense but were unable to find an offensive rhythm as they fell to Princeton 2-0 in their final non-league game of the season, Tuesday night at Myslik Field at Robert’s Stadium. Lehigh falls to 6-6-2 overall this season while Princeton improves to 8-5-1.

The Mountain Hawks and Tigers spent the first ten minutes of the first half battling for possession. In the tenth minute, Princeton had the first shot of the game, leading to a save for sophomore goalkeeper Abby Trainor.

In the 17th minute, the Tigers took the early 1-0 lead with a shot from just outside the six-yard box. Senior Ryelle Shuey responded with a shot of her own just seven minutes later. Princeton goalkeeper Tyler McCamey picked up the save to maintain the Tigers’ 1-0 lead.

Sophomore Corinne Lyght and first-year Sophia Lis added two more shots for Lehigh in the first half. Lyght’s shot in the 28th minute was saved by McCamey while Lis’ shot in the 31st minute was launched just above the Princeton goal.

The Tigers wrapped up the first half with a goal in the 37th minute to extend their lead to 2-0 going into halftime.

Princeton opened up the second half with two shots within the first three minutes, both of which were saved by Trainor. In the 52nd minute, Lyght had another chance to get the Mountain Hawks on the board but sent her shot just above the Princeton goal.

Five minutes later, Lyght drew a Princeton foul that led to a Lehigh free kick from just outside the 18-yard box. Senior Mattie Murphy took the free kick, missing the net by inches. With four minutes left in the game, Lis took her second shot of the game but was unable to get Lehigh on the board as she sent the ball into the side of the net.

Trainor tallied a new career high eight saves for Lehigh while Princeton’s McCamey finished with two saves for the Tigers.

Lehigh will return to Bethlehem on Saturday to take on American in its final home game of the season. Opening kickoff is set for 6 pm The game will be streamed on ESPN+.