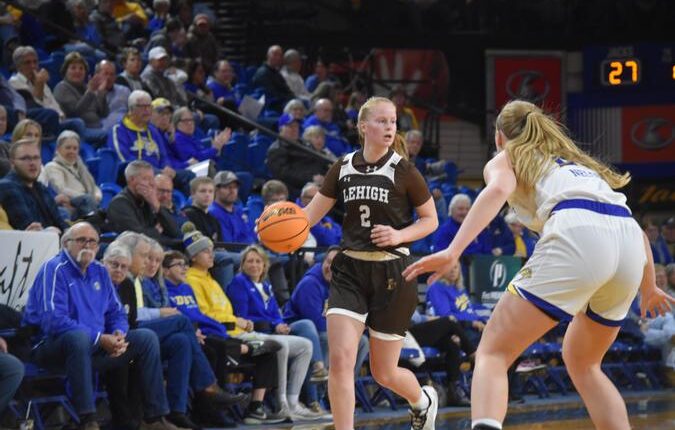 “We said very few times do you get this opportunity to come out and play a ranked team in an awesome environment like South Dakota State has,” said head coach Addie Micir. “We wanted us to go take it to show that we are a good team, but we need to level up and show the level of toughness and grittiness that was needed, and I thought we did that.”

Lehigh and South Dakota State are both now 1-1.

It was Frannie Hottinger who picked up right where she left off last game. The senior had 14 points at the end of the first half. Hottinger finished with 25 points, which is just two off of her career-high. Hottinger also led things for Lehigh on the boards, finishing with nine rebounds.

Mackenzie Kramer finished closely behind Hottinger with 21 points. Kramer had 15 points in the second half.

The Mountain Hawks were down 20-18 at the end of the first quarter. The second quarter was the difference maker as South Dakota State came out soaring, shooting 66.7% from the field.

“They’re a team that makes you pay for every mistake, and besides the second quarter, we were hanging in there,” Micir said. “We were battling and not just hanging in. We were throwing punches. Really proud of the way we played. We played really hard. I think we could prove it to ourselves that this is a stage that not only we want to get to, but this is a stage we belong at.”

While Lehigh was down 49-32 at the half, Lehigh didn’t back down in the second half. The Mountain Hawks cut the deficit to 11 off of a 3-pointer by Ella Stemmer with 8:14 to play. Stemmer finished with six points off the bench Friday night.

“The message was to keep going,” Micir said. “We shot 2-for-13 from three in the first half, but it was looks that we liked, and we couldn’t really get Kenz going until the second half, and she steps up, Frannie steps up, Ella steps up. A bunch of them do.”

The Jackrabbits had 17 turnovers compared to Lehigh’s 10, but they were in total control of the paint. South Dakota State finished with 54 points in the paint, while Lehigh only had 24.

The Jackrabbits had four players finish in double-figures.

Lehigh will now have less than 48 hours to wait until playing again. The Mountain Hawks will take on Minnesota Sunday at 3 pm CT at Williams Arena. It will be a homecoming game as six Lehigh players stop from Minnesota.

“Focus on us like we normally do,” Micir said. “Obviously, we still have to look at the scouts, see maybe a few adjustments that we need to make, but for us, it’s going to be getting used to their gym and keep doing what we do. Now that we told on ourselves with the level of toughness and grit that we can play with, we have got to continue to execute that.”