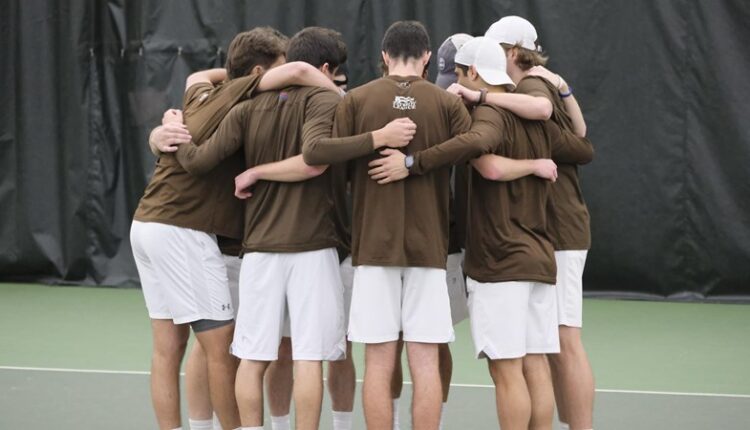 ANNAPOLIS, Md. – The Lehigh men’s tennis team fell to Army in the Patriot League semifinals on Saturday afternoon. The Mountain Hawks battled against the Black Knights but were unable to come out on top, falling 4-1 and finsihing with an overall record of 13-7.

Lehigh battled during doubles play to clinch the point but was unable to come out on top. At the No. 3 spot, juniors Michael Bukhalo and Matt Kleiman put up a fight against Army’s Nathan Jose and Jake Huarte. The duo fell 6-4. In the second flight, first-year Marc Blekhman and Jeremy Learner battled against Samuel Eden and Diego Huttepain before falling 6-3.

The Mountain Hawks worked their hardest to battle back during singles play but were unable to come out on top. Learner secured Lehigh’s first singles win of the day at the No. 5 spot. The junior defeated Samuel Haikal 6-4 in straight sets to get Lehigh on the board.

Lehigh continued to go toe-to-toe with the Black Knights but were unable to hold on in the end. Army’s AJ Woodman defeated Kleiman in the second flight 6-4, 7-5. Kleiman finished the season with a career-high 12 singles wins. At the No. 6 spot, Bukhalo fell to Jake Huarter 6-0, 4-6, 6-4. The junior finished with nine singles wins and six doubles wins with Kleiman as his partner.

The Mountain Hawks’ senior duo battled in their last match for Lehigh. During doubles play, Zack Elliott and Gary Fishkin were winning 5-4 before Army clinched the doubles point. At the No. 4 spot, Fishkin fell to Army’s Thomas Lake 6-3, 6-3. He finished with a career-high 12 singles wins. Elliott was battling against Army’s Diego Huttepain in the first flight before the Black Knights clinched the win. He finished with a team and career-high 13 singles wins and went undefeated in league play in his final season as a Mountain Hawk.

Why you should care about Lehigh’s electric bus