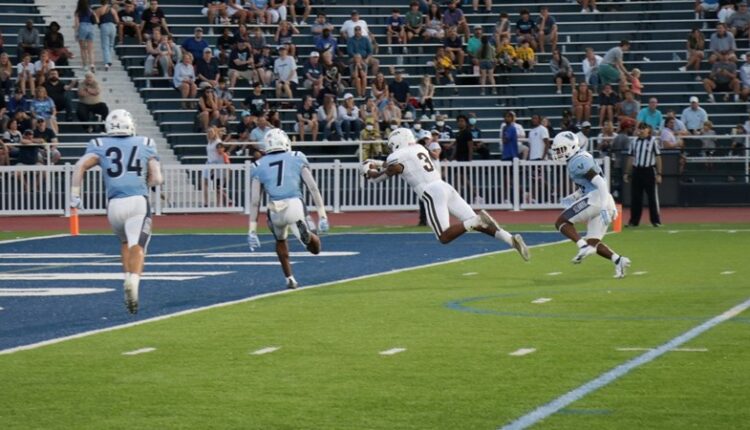 Lehigh Falls In Season Opener At No. 5/6 Villanova

VILLANOVA, Pa. – Playing on the road against No. 5/6 Villanova, Lehigh battled back from a 24-0 second-quarter hole to get within 31-17 early in the third quarter, but the Wildcats scored the final 14 points to claim a 45-17 victory Friday in the season-opener for both teams at Villanova Stadium.

Senior wide receiver Jalen Burbage enjoyed a career day, catching eight passes for 106 yards and a touchdown to lead the way to Lehigh. The Mountain Hawks rolled up 408 yards of offense, but gave up 451 to Villanova. Wildcat quarterback Connor Watkins completed 11-of-15 passes for 298 yards and three touchdowns to lead the way for Villanova.

“I’m disappointed because we could have and should have played better than we did,” Lehigh head coach Tom Gilmore said. “Offensively, we played hard and did a lot of good things, but we shot ourselves in the foot with some bad decisions and a couple of turnovers and the penalties that were drive-killers.

“We moved the ball well at times,” Gilmore continued. “We only had two punts. We have to eliminate those mistakes but there were a lot of good things to see offensively.”

Villanova opened the scoring with a Matthew Mercurio 27-yard field goal with 3:52 to go in the opening quarter. Lehigh turned the ball over on downs in Villanova territory on each of its first two possessions. Two plays after turning aside the Mountain Hawks on a 4th-and-1, Watkins connected with Dez Boykin on a 66-yard touchdown pass for the first of four Wildcat touchdowns in the second quarter. Two of the scores went to Jaaron Hayek.

Trailing 24-0, junior quarterback Dante Perri led Lehigh on a nine-play, 70-yard drive, which was capped by a three-yard touchdown pass to fifth-year tight end Alex Snyder. The Mountain Hawks then closed the first half with their second touchdown in as many drives. This time, Perri led Lehigh 63 yards in 10 plays, getting the ball into the end zone on a 25-yard pass to Burbage as Lehigh trailed 31-14 at halftime.

Perri ➡ Snyder for the first TD of the year.

Late in the half, Dante Perri hit Jalen Burbage for this 25 yard TD.

Lehigh opened the second half with a 12-play, 54-yard drive, capped by a 34-yard field goal by senior Dylan Van Dusen to get the Mountain Hawks within 31-17, but Villanova answered with an 80-yard drive that ate up more than five minutes, as Watkins scrambled in from four yards out.

“Defensively we made some huge mistakes,” Gilmore said. “We came out of coverages on some scrambles. We got caught up on some RPOs that we see every day at practice. We left some guys wide open, which you never want to see as a coach.”

Perri finished 22-of-39 for 227 yards with two touchdowns and an interception. He completed passes to nine different receivers.

“It was a really tough lesson to learn, that we have to step it up on defense,” Gilmore said. “That was a rude awakening against a good football team, giving up those big plays.”

The Mountain Hawks are back on the road next Saturday to open Patriot League play at Georgetown. Game time is set for 5 pm from Cooper Field in Washington, with streaming video on ESPN+ and audio coverage on Fox Sports Radio 94.7 FM and 1230 AM in Easton and LVFoxSports.com.