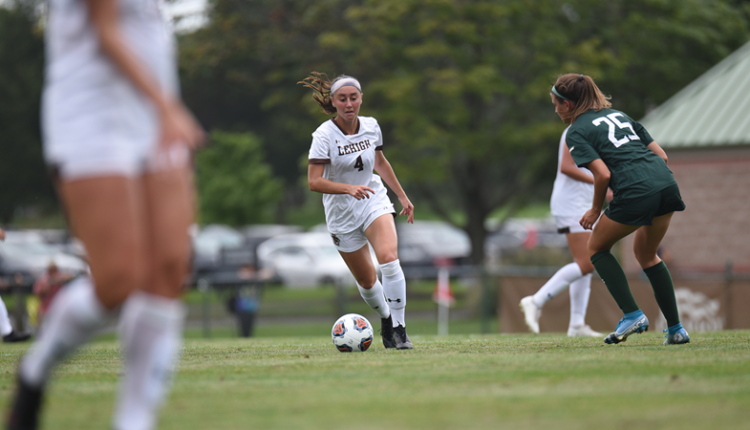 BETHLEHEM, Pa. – Lehigh women’s soccer battled Drexel for the full 90 minutes at the Ulrich Sports Complex on Thursday night, putting up 14 shots with key second-half goals from Zoe Schutter and Ryelle Shuey despite falling 3-2 to the Dragons.

“On our end as a coaching staff, we’ve really been thinking through putting our habits first,” said head coach Lauren Calabrese. “Work ethic has been the first and foremost thing for us, whether we can be consistent in our output. We’ve put players out there who are doing that, so there was a big difference tonight.”

Drexel opened up scoring with a quick goal from Casey Touey in the 23rd minute. Following the Dragons’ first goal of the game, both teams went on a scoring drought, alternating possessions to conclude the first half.

The Mountain Hawks started the second half with a dominating energy. After maintaining possession for a solid few minutes, Schutter scored Lehigh’s first goal of the season in the 48th minute.

49′ | Zoe Schutter leaves no doubt! The first goal of the Lauren Calabrese era is a BEAUT and we’re level at 1-1. 🤩

With both teams fighting to maintain possession, Touey scored the brace and gave the Dragons a 2-0 lead in the 68th minute. A Drexel foul outside the 18 led to a free kick for Lehigh. Mattie Murphy took the kick for the Mountain Hawks, laying the ball perfectly inside the six for Shuey’s header that found its way into the back of the net to tie the game at two.

The Mountain Hawks execute the set piece to perfection and we are level once again at 2-2!

“Zoe Schutter and Ryelle Shuey had really nice goals and they’ve been working really hard in training,” said Calabrese. “That’s not out of luck that they scored, that’s out of work. That’s who’s going to be playing for us, people that are going to work hard.”

The Dragons responded with a goal just four minutes later to take the 3-2 lead over Lehigh, which proved to be the game-winner. Making her first career start in net, first-year goalkeeper Maggie Ousouljoglou ended the contest with two saves.

The Mountain Hawks will travel to Newark, Del. for their first away game of the 2022 season next Thursday, Sep. 1. Lehigh will battle Delaware at 7 pm on FloSports.

How election-denying GOP governors could tilt the 2024 presidential election