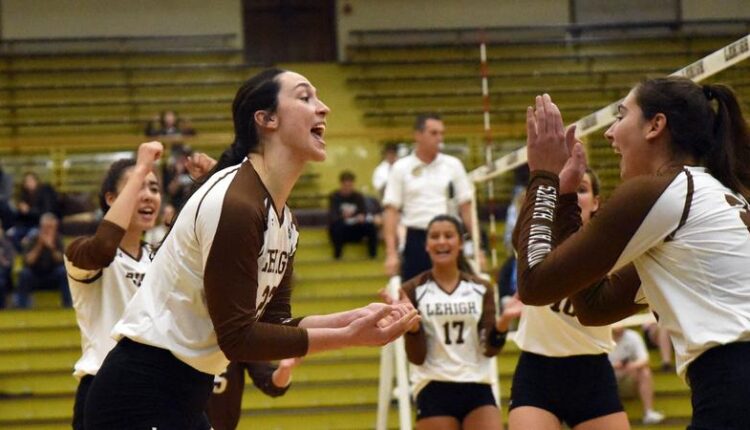 The Eagles and Mountain Hawks were within a couple of points of each other and tied at 8-8 until Lehigh scored seven of the next eight points to take a 15-9. Lehigh and American went point-for-point as the score was now 20-14. The Eagles came within three, but the Mountain Hawks stayed in front and tie the match at 1-1.

The Mountain Hawks jumped out to an early lead in the third set, leading 9-3 when American rallied for five-straight points to tie the set at 17-17. The squads were tied on multiple occasions, the last time being 23-23. The Eagles got to set point but Lehigh scored the next three points to go ahead 2-1 in the match.

American and Lehigh played yet another close set, going back and forth and being tied serval times. After the Mountain Hawks regained a one-point advantage, 14-13, the Eagles scored four-straight to take a 17-14 edge. Lehigh battled back and held a one-point lead at 20-19 and again at 22-21. American score the next four points to even the match at 2-2 and force a fifth set.

After trailing early, Lehigh had to come from behind to tie the set multiple times, with their last lead coming at 5-4. American and the Mountain Hawks battled for every last point and was even at 15-15 when the Eagles earned the final two points of the set and claimed the match.

The Mountain Hawks had a higher hitting percentage than their opponents for the second time this weekend, with Lehigh hitting .286 and American at a clip of .263. Sophomore Megan Schulte and first-year Natalie Luscomb both registered over 20 kills and hit over .400 on the night. Schulte recorded a career-high 24 kills, the third time she has had 20-plus kills in a match this, with just one hitting error for a .442 hitting percentage. She also had nine digs and two blocks. Luscomb also recorded a career-high with 20 kills and hit .410 to go with five blocks and one dig.

Sophomore Makena Smith paced the Mountain Hawks’ offense with 49 assists, which matches her season-high and marks the ninth time reaching 40-plus assists, to go with her12 digs, four blocks, three kills and two service aces. First year Madison McCartney finished the match with a team-high 10 blocks, with one solo block, and added five kills, a two of service aces. Sophomore Kyleigh Brown led the squad with 20 digs while adding four assists and four service aces.

Lehigh closes out their regular season with a road match in Hamilton, NY, when the Mountain Hawks take on Colgate on Saturday, Nov. 12 at 2 pm on ESPN+.