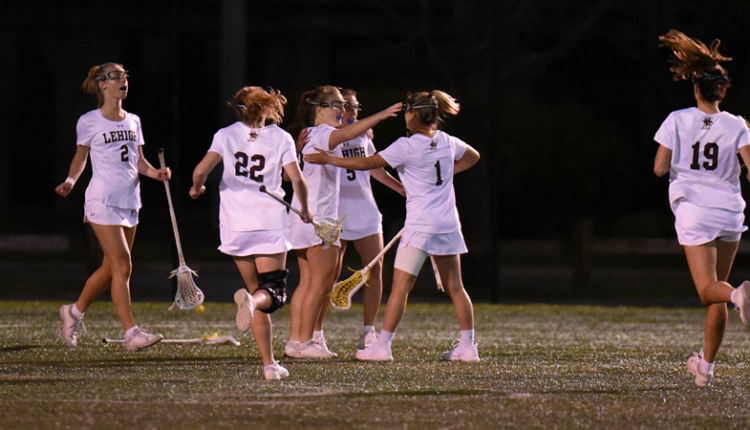 BETHLEHEM, Pa. – The Lehigh women’s lacrosse team outscored Lafayette 6-1 in the second half to turn a 10-5 halftime lead into a runaway 16-6 victory on Wednesday evening at the Ulrich Sports Complex in The Rivalry presented by Lehigh Valley Orthopedic Institute. Junior Gabby Schneider assisted on seven of the Mountain Hawks’ first 12 goals, finishing with those seven to set a program record. Classmate Katia Carnevale had a monster game as well, scoring eight goals to tie a career high. Lehigh’s third straight win evens his Patriot League record at 3-3.

Schneider’s seven assists broke Lehigh women’s lacrosse’s previous mark of six accomplished multiple times, most recently Allison LaBeau on May 2, 2017. It’s tied for the second most assists in NCAA Division I women’s lacrosse this season, while Carnevale’s eight goals are tied for the seventh most. Schneider has reached 150 career points and 82 assists, now just five from second in program history.

Here’s the program record-breaking seventh assist by Gabby Schneider in tonight’s win! It’s tied for the second most assists by anyone in the nation this season. And it came less than three minutes into the second half! 👏@USALacrosseMag @ILWomen pic.twitter.com/OypEHajktP

The Mountain Hawks caused 10 turnovers on the evening, including two (along with three groundballs) from senior Emma McGillis. Classmate Jenna Garden also caused a pair of turnovers.

Emma McGillis would NOT be denied in this sequence, ending up with her second caused turnover of the evening. pic.twitter.com/FphoHr6IMG

— Lehigh W Lacrosse (@LehighWLacrosse) April 21, 2022 Two goals from Giordano and Carnevale’s first of many gave Lehigh a 3-0 lead at the 3:42 mark of the first quarter. The Leopards answered less than a minute later, but the Mountain Hawks reeled off the next three and six of the next seven. It was capped off by first year Quinn Meyer’s first collegiate goal at 5:13 of the second to give Lehigh a commanding 9-2 lead.

There were PLENTY of highlights in tonight’s game, including Quinn Meyer’s first-career goal! 👏👏👏 pic.twitter.com/4vMpW4juq8

— Lehigh W Lacrosse (@LehighWLacrosse) April 21, 2022 The Leopards did score three of the final four first-half goals to pull within 10-5 after 30 minutes of play.

The momentum was short-lived as Marte scored just 58 seconds into the third quarter, then Carnevale scored her sixth and seventh of the game, 11:44 apart, to give the Mountain Hawks a 13-5 edge after 45 minutes of play.

Lafayette broke through at 14:09 of the fourth to end a 17:51 scoreless drought, but goals from Carnevale, Giordano and Eberhardt rounded out the 16-6 final.

What a night from Katia Carnevale, who finished with eight goals to tie a career-high. There may have been no more pretty goal than her [email protected] @ILWomen pic.twitter.com/VtBwkXJmf9

What a move by Emma Eberhardt, splitting the D and finishing for the exclamation point of tonight’s 16-6 win over Lafayette! 😱💪#SCTop10 #PLTop3 @USALacrosseMag @ILWomen pic.twitter.com/fJr5hHH5e8

— Lehigh W Lacrosse (@LehighWLacrosse) April 21, 2022 Final shots were 36-23 in favor of Lehigh while the Mountain Hawks held a 27-19 edge in groundballs. Draw controls were tied at 13 (with Eberhardt leading Lehigh with six). Sophomore Hayley Hunt finished with 11 saves while senior Kerry McHugh made one over the final 4:09. Lexie Coldiron of Lafayette tallied 16 stops.

The Mountain Hawks remain home to host Holy Cross on Saturday. It will be Senior Day with opening draw set for 11:30 am and senior recognition planned for postgame.

Miss today’s rivalry win? Check out some of the top highlights in less than 60 seconds 🎥 pic.twitter.com/7ufYiwUMBZ

We caught up with Gabby Schneider following tonight’s 16-6 win over Lafayette which saw her dish a program record seven assists! pic.twitter.com/KtfYWAKwBp