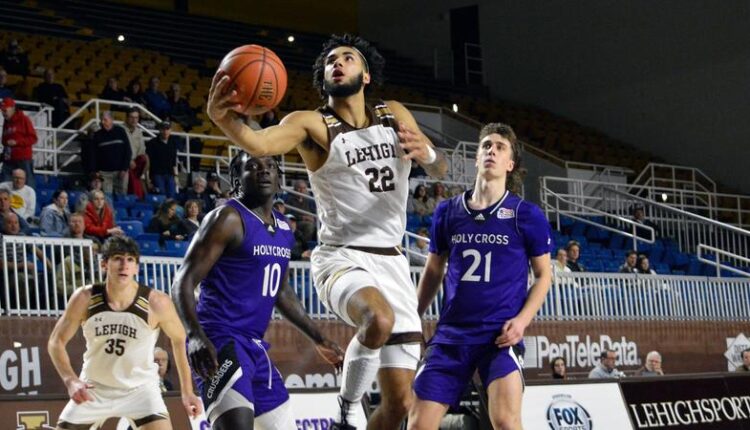 BETHLEHEM, Pa. – The Lehigh men’s basketball team took down Holy Cross, 76-58, inside Stabler Arena on Wednesday evening for its third straight win as the Mountain Hawks improve to 5-2 at home.

The Mountain Hawks get back to .500 overall, 8-8, and improve their Patriot League record to 3-2 while Holy Cross falls to 6-12 on the year and also has a 3-2 record in league play. This Lehigh victory marks its third consecutive win over the Crusaders inside Stabler and the Mountain Hawks have won five of the last six meetings.

“I thought our energy at times was incredible. Our defensive effort was great, forcing turnovers and making all the hustle and effort plays, including the contributions from our bench,” stated head coach Dr. Brett Reed.

WITH AUTHORITY!! Adiassa gets open in the lane and throws it down!! #GoLehigh

The second half started with a Lehigh basket, but Holy Cross was not going to go away quietly, as the Crusaders surged back to within six points, 47-41 with three-straight three-pointers knocked down by Holy Cross’s Will Batchelder. Lehigh’s lead was cut to just three when yet another Batchelder trey put the score at 51-48 with 10:43 remaining. After that spurt from Holy Cross, the Mountain Hawks then went on a 25-5 run to give Lehigh its largest lead of the night at 23 points, 76-53 with under a minute to play. The Crusaders mustered a couple of late baskets, but Lehigh would come out on top with a 76-58 victory.

Sophomore Tyler Whitney-Sidney led the Mountain Hawks in scoring, contributing 21 points, six boards, three assists and two steals. He finished the night shooting 64 percent (9-of-14) from the floor, made his lone three-point shot and was 2-for-2 at the free-throw line. Whitney-Sidney has now reached the 20-point mark for the third time this season and scored in double-figures ten times.

Senior Evan Taylor was the other member of the Brown and White to reach double-digits, scoring 12 points that all came in the second half. He also led the squad in rebounds with seven and dished out two assists. Taylor has now recorded at least 10 points in nine consecutive games and 14-of-16 games this season. Taylor is now just five points away from becoming the 39th Mountain Hawk in program history to reach 1,000 points.

COUNT IT!! Taylor knocks down the pull-up jumper with contact! He’ll head to the line to convert the and-one with Lehigh with a 20-point lead, 73-53, with 3:14 to play. #GoLehigh

Nine other Mountain Hawks contributed points tonight, meaning 11 different student-athletes recorded points, which is the most that a Lehigh team had contributed all season. Junior Dominic Parolin finished with nine points and a rebound while sophomore Keith Higgins Jr. finished with seven points, two steals and two assists. Junior Jalin Sinclair and sophomore Ben Knostman each dished out three assists which were tied for the team-high with Whitney-Sidney. Senior Reed Fenton sank a three-pointer for his lone basket and put him just one point away from hitting 500 career points.

Holy Cross had two Crusaders finish in double-figures, combining for 39 of the squad’s 58 total points. Gerrale Gates scored 24 points and brought down 11 rebounds for a double-double, shooting 53 percent (10-for-19) from the field and 4-fo-5 at the free-throw line. He scored 17 of those points in the first half while Batchelder scored all 15 of his points in the second half, going 5-of-11 behind the three-point line.

Lehigh committed 14 turnovers that Holy Cross turned into 11 points while the Crusaders were forced into 17 miscues that the Mountain Hawks turned into 14 points. The Brown and White out-rebounded Holy Cross 34-28 and dominated points in the paint, 38-22.

“I’m really proud of the contributions from our bench,” “I’m really comfortable with our guys, we’ve tried different combinations of lineups this season and have been able to continue to adapt, stay engaged and still contribute. And tonight, was a great illustration of that,” concluded Reed.

The Mountain Hawks are back home on Saturday, Jan. 14 when Lehigh welcomes American to Stabler Arena with tip-off set for 2 pm Tickets can be purchased at LehighTickets.com or at Stabler Arena on Wednesday prior to tip-off.

The forces that power antisemitism and racism are the same. We must stand against them | Opinion