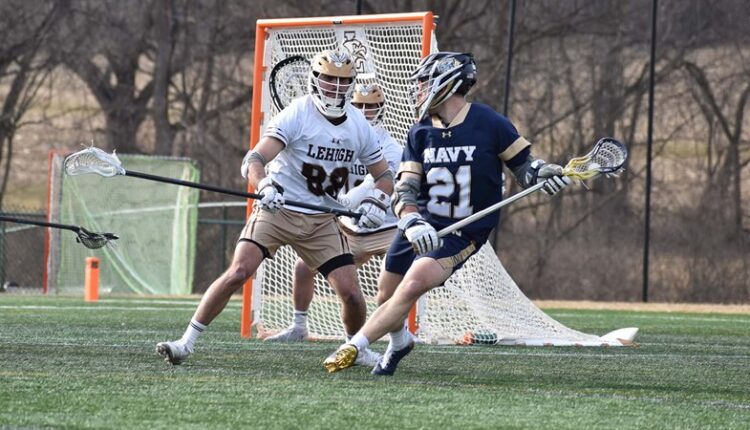 BETHLEHEM, Pa. – Following an impressive comeback 11-7 win over Navy last weekend to open Patriot League play, the Lehigh men’s lacrosse team remains home to host Holy Cross on Saturday. Please note the new start time of 10 am (moved from 1 pm due to forecasted inclement weather). The Mountain Hawks responded from early deficits of 3-0 and 5-2 vs. the Midshipmen to outscore the Crusaders 9-2 over the game’s final 40+ minutes.

Celebrating his birthday, sophomore Scott Cole scored two of Lehigh’s five first-half goals, including his second with 2:09 left in the second quarter, to pull the Mountain Hawks even at five after 30 minutes of play. Senior Cole Kirst made his season debut and immediately scored twice. Sophomore Quinn Armstrong scored two goals as well, as did classmate Aidan Decker, who scored his second and third career goals. They came within 3:14 of each other in the third quarter, the first a behind-the-back beauty and the second following a quick move to free himself from a defender. Those goals turned a 6-6 tie into an 8-6 Lehigh lead.

After Navy pulled within 10-7 with just its second goal in nearly 40 minutes, senior Mike Sisselberger immediately scored off the faceoff to erase any doubt. Sisselberger finished the day 18-of-22 facing off with 13 groundballs, to earn his second Patriot League Faceoff Specialist of the Week award (and league-record eighth of his career). He was also named to the USILA National Team of the Week. Graduate student goaltender James Spence finished with 10 saves, all coming in the game’s final three quarters.

Holy Cross stands 0-5 on the season and 0-1 in Patriot League play. After three straight losses of seven or more goals, the Crusaders lost a tight 11-9 final against Merrimack and fell at Army West Point in the league opener, 14-8. Dean DiNanno leads Holy Cross with nine points via four goals and five assists. Jayce Lambert scored a team high seven goals and dished an assist. Connor DePiero has won just over 50 percent of his faceoffs (65-of-121) with a team-high 24 groundballs. Defenseman Chris Conlin has 15 groundballs and a team-high nine caused turnovers.

The teams have split each of the four meetings, with Lehigh most recently winning in 2020 by a 15-10 final. It marked the final game for both teams before the COVID-19 pandemic shut down the season. That improved the Mountain Hawks’ all-time record vs. Holy Cross to 28-2. Both of Lehigh’s defeats have come on the road (2019 and 2017). Lehigh is 14-0 against Holy Cross at home. The teams first met in 1991 – a 14-7 Lehigh win on the road.

After Saturday’s game, the Mountain Hawks prepare for their first road league game, at No. 12 Army West Point next Saturday in a rematch of the 2019 Patriot League Championship Game. Gametime is set for 12 pm on ESPN+.