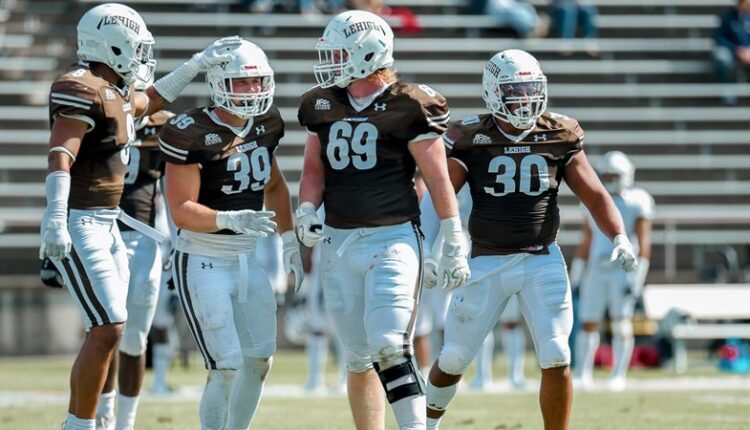 BETHLEHEM, Pa. – It’s the final non-league game of the regular season and the final game before a bye week for Lehigh as the Mountain Hawks visit historic Franklin Field Saturday to face the Penn Quakers. Lehigh is still searching for its first win and first touchdown of 2021. The Mountain Hawks created some offensive opportunities in the second half against Yale last week but were unable to convert in a 34-0 setback. Lehigh will look to head into its bye week on a high note as Tom Gilmore faces his alma mater for the first time as a head coach.

Penn is playing his third Patriot League opponent in four weeks. The Quakers opened their season with a victory at Bucknell, then dropped back-to-back contests at Lafayette and at home to Dartmouth.

Lehigh’s Tom Gilmore will square off against his alma mater for the first time as a head coach. Gilmore is a 1986 Penn graduate and was a standout on the defensive line for the Quakers. He was a three-time All-Ivy honoree on three league championship teams and was a two-time All-American. In 1985, Gilmore received the Asa S. Bushnell Cup as the Ivy League Player of the Year, and was one of only two linemen to ever claim the honor before it was divided into offensive and defensive awards in 2012. Gilmore did not face Penn as head coach at Holy Cross and was 1-2 versus the Quakers as Lehigh’s defensive coordinator from 2000-03.

Senior running back RaShawn Allen was recently named one of 176 semifinalists for the William V. Campbell Trophy, which recognizes the nation’s top football scholar-athlete. A team captain, Allen carries a 3.75 cumulative GPA in Lehigh’s rigorous electrical engineering program. led the Mountain Hawks in rushing during the spring 2021 campaign, with 128 yards in three games, highlighted by a 49-yard touchdown run at Lafayette. The Canton, Mich., native is a founding member of the Lehigh chapter of Student Athletes of Color for Change and has also written a pair of novels, “The Canton Greats” and “The Canton Greats Take the World,” under the pen name Ronald Jermaine Love. The National Football Foundation will name 12-14 finalists in late October.

Freshman wide receiver Dajuan Fields provided a spark offensively for the Mountain Hawks against Yale. Fields led Lehigh with 56 all-purpose yards against the Bulldogs, rushing three times for 23 yards and catching a team-best three passes for 33 yards. His 24-yard carry in the third quarter matched Lehigh’s longest play of the season. Fields has five catches for 42 yards in five games. The Buford, Georgia native was coached in high school by former Lehigh captain and All-Patriot League linebacker Bryant Appling ’01.

Lehigh’s loss to Yale was its 12th straight dating back to the 2019 season. The Mountain Hawks need a win against Penn to avoid the longest losing streak in program history. Lehigh lost his last five games in 1925 and his first seven in 1926 before snapping the streak with a 14-0 win over Rutgers in his next-to-last game of the 1926 season.

Penn brings a 1-2 mark into Saturday’s game. The Quakers opened their season with a 30-6 win at Bucknell but are coming off back-to-back losses to Lafayette and Dartmouth. Penn was picked fifth in the Ivy League preseason poll. The Quakers had four players recognized as preseason All-Ivy by Phil Steele: linebacker Brian O’Neill, defensive lineman Prince Emili and wide receivers Ryan Cragun and Rory Starkey Jr. Isaiah Malcome is the top rusher for Penn with 139 yards and a touchdown in three games. John Quinnelly has started all three games at quarterback. Cragun is the leading receiver with 17 catches for 290 yards and a touchdown. O’Neill leads the defense with 20 tackles, while Emili has three sacks to go along with 19 stops.

Saturday’s game kicks off just after 1 pm from Franklin Field in Philadelphia. The game will be televised regionally on NBC Sports Philadelphia and streamed on ESPN+. Audio coverage will be available on Fox Sports Radio 1230/1320 AM and 94.7 FM Allentown and LVFoxSports.com beginning at noon.

Lehigh will have its bye week next weekend and will close out the regular season with five straight Patriot League games, beginning Oct. 23 when the Mountain Hawks visit Fordham. Game time is set for 1 pm from Jack Coffey Field in the Bronx, NY