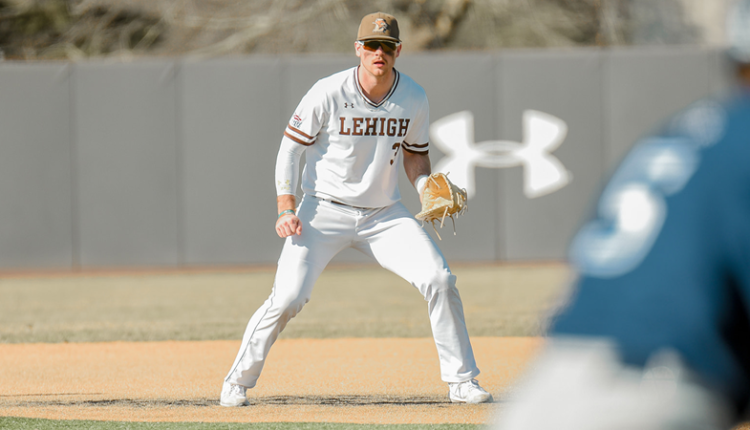 BETHLEHEM, Pa. – Five RBIs for senior Gerard Sweeney and a quality start out of right-hander Ben Christian led the Lehigh baseball team to an 8-1 victory over St. Bonaventure Sunday afternoon at J. David Walker Field. The win is the team’s sixth straight, as the Mountain Hawks (12-6) are victors in eight of their last nine games. In addition, Lehigh improves to 5-0 at home and the six-game win streak is the longest since 2019.

“I was a little surprised by the wind blowing straight in today that we drove the ball like we did,” said head coach Sean Leary. “There were another two home runs that were enormous and [Justin] Butler has had the best stretch of power I’ve seen in a first year in my entire time here. Seven home runs in 18 games is pretty amazing.

“Again, we talk about the little things that come up in the game. Whitlinger got on base four times today, just working hit by pitches and walks and ends up scoring some key runs. I think we’re starting to really become an offense that can score in multiple ways.”

Sweeney continued his torrid week by going 2-for-4 with a home run, a run scored and five RBIs. First-year Rafe Perich (2-for-4) and sophomore Tyler Young (2-for-4) registered multi-hit games while first-year Justin Butler homered for the fourth time this week, upping his season total to a Patriot League – high seven home runs.

“Sweeney has had 15 RBIs in six games this week and has just been so clutch when the moment is there, he just clears the bases,” Leary said. “The home run was just one beautiful swing on a hanging breaking ball. I think that adding him back into our lineup has made everyone more relaxed. What a week, I don’t think any of us expected him to come back and take over like this.”

Christian (2-0) went 5.2 strong innings without allowing a run, striking out two and walking one to earn his second win of the 2022 campaign. First-year Val Taddei and sophomore Teddy Tolliver combined for 2.1 shutout frames while Taddei struck out three of the five batters he faced. Senior Casey Rother tossed the final inning of relief, coming on to the mound after spending time in both right field and at first base. He threw the ninth inning, allowing the Bonnies’ (0-12) lone run of the contest on three hits.

“Ben was on a pitch count today, so we wanted him to go out and set the tempo for the day,” said Leary. “He was so efficient that he threw 50 pitches after five innings and the number was a tick higher, so he went out and pitched the sixth. He got 17 outs on the limited pitch count he was on, got multiple pitches for strikes and kept people off balance. I thought Ben did an outstanding job today and when you’re pitching like that and the game is moving with tempo, a couple of runs might be all he needed. He was the standout guy for us today.”

In the very next inning for the Mountain Hawks, Whitlinger got hit by a pitch with the bases loaded to score a run, taking a 5-0 lead and then a three-RBI single for Sweeney to right center field made it an 8-0 game.

The pitching combination of Christian, Taddei and Tolliver held the Bonnies scoreless for the next four stanzas before cracking the run column in the top of the ninth after a Matthew Williams single to right field brought in Brendyn Stillman, cutting the Lehigh lead back to 8- 1.

“[Relief pitching] is going to be the key in the Patriot League for us this year,” said Leary. “We’ve got a couple of set-up and closer guys and today, Ben gave us an opportunity to have guys go out and pitch with a lead. Val [Taddei] came in with a couple of runners on and worked us out of the inning and Teddy has done the job several times in a row now, so we’re starting to build a little depth in our bullpen.

“We know that we have a lot of work to do to get to where we want to be, but certainly this week when you have six games and you win them all, that’s all you can is go out there and score more runs than your opponent. I thought our focus for this week was pretty terrific.”

Lehigh is set to head back out on the road Wednesday to face Penn in Philadelphia at 3 pm The game is scheduled to be streamed live on ESPN+ (subscription required).