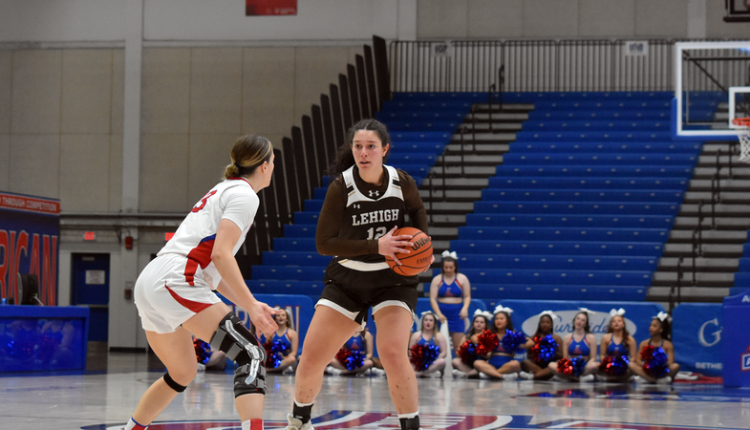 Lehigh Comes From Behind in 79-77 win at American

BETHLEHEM, Pa. – The Lehigh women’s basketball team clawed back and came away with a hard-fought victory, defeating American 79-77 Saturday afternoon at Bender Arena.

“We said to our team after the game, sometimes you have to find a way to get well out of a win on the road, and that’s what we did,” said head coach Addie Micir. “It came down to playmaking time.”

Coming into Saturday’s game, Lehigh was 8-17-all time when playing at Bender Arena. The last time Lehigh won at American was Jan. 11, 2020, when the Mountain Hawks won 64-63.

American came out strong right from the start. The Eagles went on a 10-4 run, which sparked a Lehigh timeout. American would continue to hold a lead for the majority of the game.

The Eagles couldn’t miss in the first half, shooting 75% in the first 20 minutes and 8-of-10 in the second quarter.

American had an 11-point lead with 4:47 left in the first quarter, which would be the largest lead of the game for the Eagles.

Heading into halftime, American had a 44-39 lead.

It wasn’t until the fourth quarter that Lehigh got its first lead of the game. Mackenzie Kramer nailed a three-pointer with 8:37 seconds left, which gave the Mountain Hawks a 62-61 lead.

The end of the game would be a free throw battle. Lehigh shot 19 free throws in the fourth quarter, and ended the day going 28-of-36 from the line. Hottinger would lead the way at the charity stripe. She was 14-of-17 from the line and finished with 26 points and 10 rebounds, which marked her 10th double-double of the season.

Hottinger was very clutch down the line. The game was tied at 75 after Emily Johns made two free throws with 51 seconds left. Hottinger answered right back with two free throws. Behar and Hottinger both then got sent to the line. They both missed one. American had a chance to tie the game or to make a game-winning three-pointer, but the Eagles missed two shots with one second left.

Kramer had 15 points in her first game back after missing Wednesday night’s game at Holy Cross, Jamie Behar had 11 to go along with four steals, and Ella Stemmer had nine points.

American’s Emily Johns had a team high of 20 points.

While Lehigh ended the game shooting 37.3% from the field and American was 58.3% from the field, the Mountain Hawks were still able to find a way to capture their first league road win of the season.

Lehigh will now look to win their second straight game when they take on Loyola at 6 pm on Wednesday at Stabler Arena.

“Knowing we can do it in a tight situation is key,” Micir said. “We’ve had to come from behind a little bit now,which is not something that we’re used to, but we can grind, and we needed different players to step up. I thought Jamie had one of her best games in terms of doing it on both ends. Kenz and Frannie kept holding it down for us, and we continue to need people to step up.”