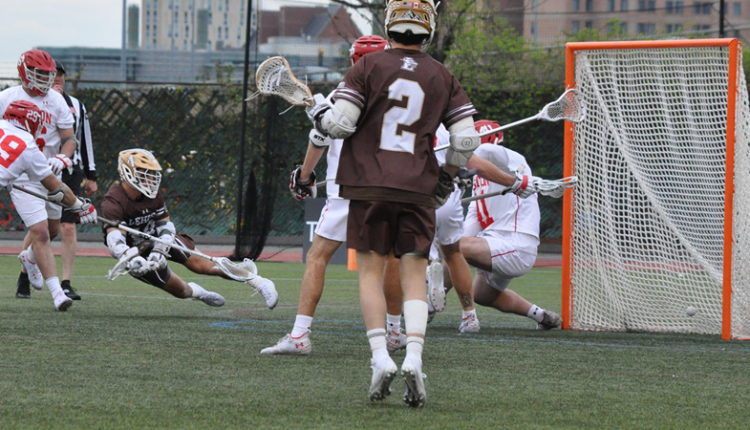 BOSTON – Top seeded and no. 16 Boston University scored six straight goals to take an 11-6 third-quarter lead, but the fourth-seeded Lehigh men’s lacrosse team responded with six of the next seven to pull even. However, it was the homestanding Terriers who advanced to the Patriot League Championship Game, as Tommy Bourque beat Lehigh graduate student goalkeeper James Spence with a bouncer at 1:14 of overtime to give Boston University a 13-12 victory on Friday evening in the semifinals . It marked the Mountain Hawks’ fourth heartbreaking loss over the last month – three coming in overtime and one with five seconds left in regulation. Lehigh ends its season at 8-7 overall.

Twenty two Lehigh turnovers really hurt, including seven in the fourth quarter and one in OT.

Junior Justin Tiernan continued his nearly improbable comeback from injury, scoring a career-high four goals to reach 11 on the season (in just five games). Included were two fourth-quarter goals, including the equalizer with 4:34 remaining to help force overtime.

Graduate student James Spence made 15 saves, his seventh straight game with 12 or more saves (while also stopping more than 50 percent of the shots sent his way). Senior Mike Sisselberger was strong against the second team All-League faceoff specialist, winning 18-of-28 on the day with a season-high 17 groundballs. His 141 GBs this season are third in program history. The 325 in his career are now second, as he passed Ryan Snyder on Friday.

A back-and-forth opening quarter and half saw neither team lead by more than one goal. The Mountain Hawks held early leads of 3-2, 5-4 and 6-5. Kirst from Schelling gave Lehigh that 5-4 advantage with 13:09 left in the second quarter. Less than five minutes later, junior Christian Mule’ scored from sophomore Quinn Armstrong to give the Mountain Hawks a 6-5 lead.

That’s when BU made its run, scoring six consecutive goals, with the first coming at 7:37 of the second quarter and sixth coming at 9:16 of the third, as the Terriers opened an 11-6 lead.

It took just 3:25 of the fourth to trim the Terriers’ lead to one, as Schelling scored twice, with a Tiernan goal sandwiched in between. After more than seven minutes with no scoring for either side, Tiernan converted his fourth of the game, from Schelling, at the 4:34 mark.

Both sides had numerous chances to pull even down the stretch of regulation, but the defenses stood tall. Spence made his 15th save as time expired in regulation, a huge stop on an odd-man break.

Sisselberger won his sixth straight faceoff to begin the extra session (going 5-for-5 in the fourth quarter and 1-for-1 in overtime), but the Mountain Hawks couldn’t convert. On the Terriers’ second possession of overtime, Bourque put home the game-winner.

Final shots were 53-36 in favor of BU while the Mountain Hawks held a 41-35 edge in groundballs.