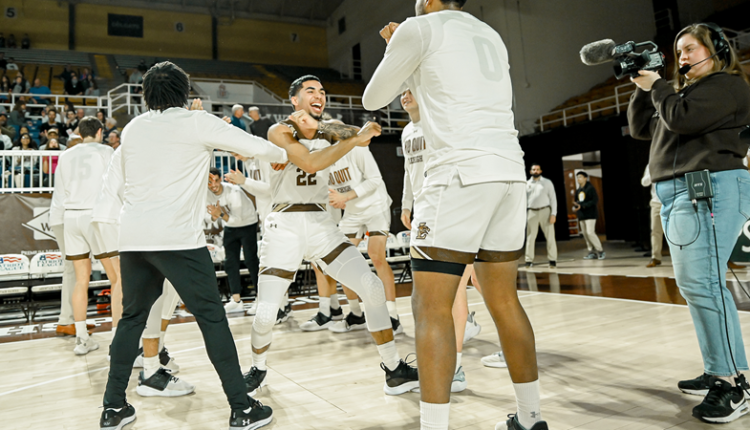 BETHLEHEM, Pa. – Following a 91-77 Patriot League Quarterfinal win over Army West Point, the fourth-seeded Lehigh men’s basketball team hopes to build on that momentum in its toughest test yet, at top-seeded Colgate on Sunday. Opening tipoff for the Patriot League Semifinals is set for 2 pm on CBS Sports Network. The Mountain Hawks are back in the semifinals for the first time since 2019 (the rookie seasons for current seniors Jeameril Wilson and Nic Lynch, and sophomore campaign for fifth-year senior Marques Wilson). Lehigh handed Colgate one of the Raiders’ two Patriot League defeats this season.

Trailing 27-20 with 6:25 left in the first half on Thursday, the Mountain Hawks responded with a 19-2 run to take a 39-29 lead, and they wouldn’t trail the rest of the way. Anytime Army tried to make a run in the second half, Lehigh quickly responded and held a double-figure lead for the game’s final 15:41. Jeameril Wilson finished with a career-high 23 points, 19 coming in the first half. It marked his fourth game with 20+ points this season, after entering the season with one in his first three years. Junior Evan Taylor scored 20 points, his second straight 20+ point game and the seventh of his career (all coming in 2022).

The 3-point line continued to be key for Lehigh. After beginning 1-for-11 (which included 10 straight misses), the Mountain Hawks hit 13 of their final 20 of the evening to finish 14-of-31. It marks Lehigh’s fourth game in the last six with 10 or more makes. Heading into the Jan. 13 road game at Bucknell, Lehigh stood 252nd nationally in 3-point percentage (32.0). Today, the Mountain Hawks have raised that season percentage to 38.4 – good for 10th in the nation. Sunday’s semifinal matchup with Colgate features two of the top 10 3-point shooting teams in the country. In Patriot League (regular season) games only, Lehigh finished first (42.2) and Colgate second (39.6). For the full season, the Raiders are first (40.1) with the Mountain Hawks in second (38.4).

Both teams enter Sunday hot, with Colgate riding a 13-game winning streak. Lehigh has won three straight and four of the last five.

Colgate has won 13 in a row ever since its Jan. 28 road defeat at Boston University. The Raiders finished Patriot League play 16-2, with their only losses coming on the road at Lehigh and BU. Overall, Colgate is 13-1 at home this season and has won 11 in a row at Cotterell Court. The Raiders’ five starters each average double-figure points, led by Nelly Cummings and his 14.7 points per game. He’s followed by Tucker Richardson (12.5), Jack Ferguson (12.4), Ryan Moffatt (10.2) and Keegan Records (10.2). The top scorer off the bench is Oliver Lynch-Daniels (6.9). Colgate is first in the Patriot League in scoring offense (76.0) and fourth in scoring defense (67.6). The Raiders are also second nationally in 3-point percentage (40.1).

Lehigh and Colgate split the two meetings this season, with each winning on his home court. The Mountain Hawks’ 85-81 win over Colgate on Jan. 4 snapped a five-game Raiders’ win streak in the series. Colgate responded with a 78-62 victory on Feb. 9 to take a 58-42 lead in the all-time series. Despite the Raiders’ recent success vs. the Mountain Hawks, the teams have split the last 14 meetings dating back to 2016. In that time, the teams also squared off in the 2017 and 2020 Patriot League Quarterfinals, with Lehigh winning in ’17 and Colgate in ’20. Lehigh’s last victory at Colgate came on Feb. 14, 2018, a game that saw then-rookie Marques Wilson score a career-high 28 points. The Mountain Hawks have lost the last four in Hamilton, NY since. The first-ever meeting between Lehigh and Colgate was in 1909-10, a 25-24 Colgate win. Lehigh’s first victory was in 1961-62 by a 72-71 final.

If the Mountain Hawks win on Sunday, they would advance to the Patriot League Championship Game for the first time since 2017 and third time in the last seven seasons. The winner of Sunday’s Lehigh-Colgate game will face the winner of Boston University at Navy on Wednesday night at 7:30 pm