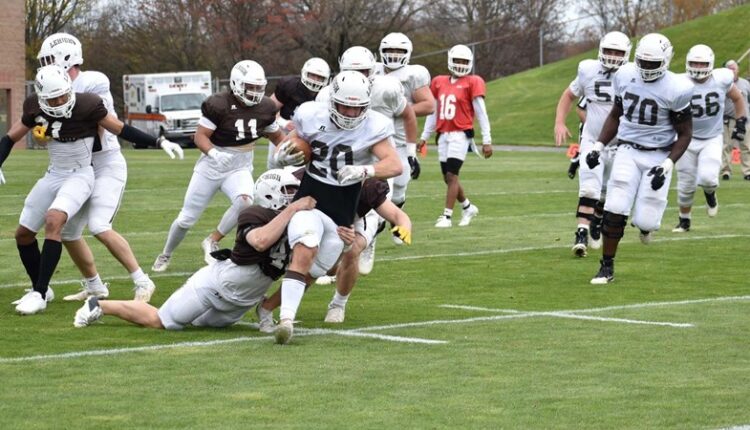 BETHLEHEM, Pa. – The Lehigh football team got back out on the field at Goodman Stadium to play the annual Brown and White Spring Game. The Mountain Hawks showcased the work they have put in this spring as the offense competed against the defense with several built-in breaks for special teams work.

The defense was effective in shutting down the offense at times as well and compiled multiple would-be sacks (quarterbacks were not live for contact).

“We had a really good day offensively overall,” Lehigh head coach Tom Gilmore said. “We saw these improvements with some of our position groups and I’ve seen it starting to click on a higher level. We lightened up at the end of the week in practice but I had a feeling we were getting there and getting closer. So just going to a live situation today, there are no question marks if we made that play or not. It was live, you either made the play or not and we made a lot of plays. The defense did a great job too.”

On the second series of the day, the offense moved the ball 80 yards in nine plays, capped by a seven yard touchdown pass from junior Dante Perri to junior Eric Johnson. The drive was aided by several strong runs from senior Zaythan Hill and junior Jack DiPietro and a 30 yard completion by Perri to senior Johnny Foley.

With junior Hank Shapiro taking over at quarterback, the defense stopped the offenses’ next two drives. Senior Mikhari Sibblis ended the second drive with a would-be sack. Sibblis also added a pass breakup on the day.

Senior Nigel Summerville was the third quarterback to see action. On his first series, Lehigh moved the ball 65 yards in nine plays. Hill broke loose on a 35 yard run which led to a 13 yard scoring pass to junior tight end Christian Williams.

The latter part of the scrimmage featured overtime, with three quarterbacks having opportunities from the 25 yard line.

Summerville threw a 27-yard touchdown to senior wide receiver Jalen Burbage on the last offensive drive of the game.

“During the course of the spring, you never know where you really are,” Gilmore said. “Today was the best indication. We did a live scrimmage for a segment two weeks ago. So that was a good point of reference there, but today was the first time we went significantly live. I think we have a really good picture of where we are.”

Before the game, junior defensive lineman Ben Murphy was awarded the James S. Gum scholarship. The scholarship was established in August 2006 and is to honor James S. Gum who lost a six-year year battle with ALS in May 2006. Murphy is a native of Haverford, Pa., and made five starts of the 2021 season on the defensive line.

The Mountain Hawks will open the 2022 season on the road at Villanova on Friday, Sept. 2. The home opener is set for Sept. 17 when Lehigh hosts Richmond.