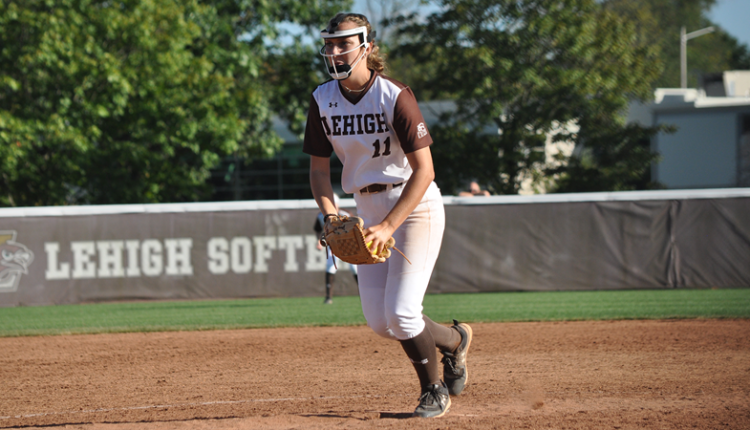 TAMPA, Fla. – Lehigh closed out his spring break trip to Florida with a pair of wins Saturday at USF Softball Stadium. The Mountain Hawks raced to a 4-0 lead in their first game of the day on the way to a 5-2 victory over Canisius and then erased deficits of 3-0 and 5-4 to rally past St. Thomas 8-5.

Sophomore Katelyn Young earned both victories in the circle, allowing just one earned run over 11 innings of work in the circle. Four Mountain Hawks had three or more hits over the two games and four drove in multiple runs as Lehigh returned home with a 7-11 record.

Lehigh wasted little time getting started against Canisius (9-8) in the morning. Senior Carley Barjaktarovich led off the game with a bunt single, took second on an error and scored on a double by senior Jaelynn Chesson. Two more runs scored on a single by senior Karsen O’Rourke as Lehigh led 3-0 after half an inning.

Senior Addie Kittel led off the second with her first home run of the season to give Lehigh a 4-0 advantage.

Canisius got on the board with an unearned run in the bottom of the sixth, but Lehigh answered almost immediately as sophomore Amanda Greaney homered leading off the seventh. The Griffins pulled a run back in the seventh on a wild pitch but Young was able to shut the door without any further damage.

Young finished with a line of two runs (one earned) on six hits. She struck out seven and walked five. Seven different Mountain Hawks had one hit against Canisius.

In Lehigh’s second game of the day, St. Thomas (3-20) raced to a 3-0 lead on a first inning RBI ground out and a third inning two-run home run by Brooke Ellestad.

The Mountain Hawks answered with four runs in the home third inning on two-run doubles by first-year Rory Dudley and then Greaney.

A Christina Crawford home run and Kaitlyn Raymond RBI single in the fourth put the Tommies back in front before Lehigh scored the final four runs of the day.

Barjaktarovich led off the fourth with a single, stole second, moved to third on a wild pitch, and scored the tying run on a ground out by junior Emily Cimino.

Chesson followed Cimino’s ground out with her fourth home run of the season, which put Lehigh up 6-5. O’Rourke later singled home Dudley to put Lehigh up by two after four. Chesson capped Lehigh’s scoring with an RBI double in the fifth.

Young allowed two hits and a walk with three strikeouts in four innings of scoreless work in relief of first-year Maria Urban. The two wins Saturday even Young’s season record at 4-4.

Dudley led Lehigh with three hits against St Thomas, while Barjaktarovich, Chesson and O’Rourke all added two. Lehigh finished with 14 hits off of three Tommie pitchers.

The Mountain Hawks are scheduled to play a doubleheader at Fordham on Wednesday with first pitch for game one set for 2 pm from the Bronx, NY Lehigh will open Patriot League play next weekend with three games at Army West Point.

A glimmer of hope on the flood insurance front | News, Sports, Jobs