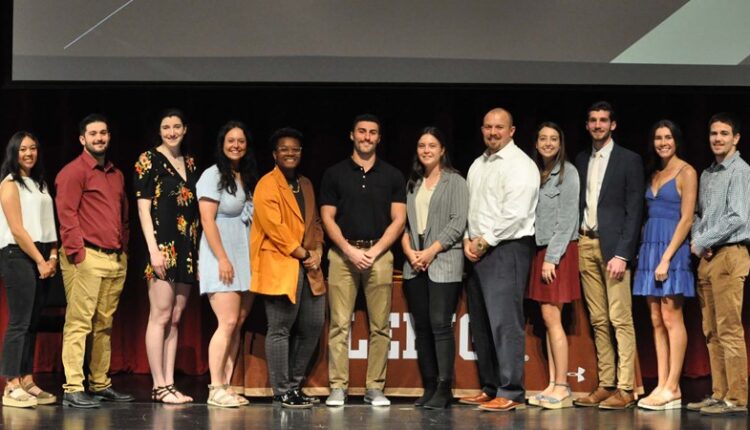 BETHLEHEM, Pa. – Lehigh Athletics celebrated the accomplishments of the 2021-22 academic year at the annual Student-Athlete Awards Convocation, which returned to Baker Hall inside Zoellner Arts Center on Monday, May 9. This year’s convocation featured the return of an in-person event featuring the full athletic department and distinguished guests for the first time since 2019.

The Convocation featured the announcement of Lehigh’s department award winners, the annual end of year highlight video and recognition of the athletic department’s University award winners.

Ann Foley from the swimming and diving team received the department’s highest honor – the Graduating Scholar-Athlete of the Year award. Foley was a three-time Patriot League champion in the pool, including a 2022 title in the 100 free where she set a Patriot League and championship meet record and hit a NCAA B-Cut with her winning time. She also is a four-time Academic All-Patriot League honoree, who held a 3.82 GPA earning her undergraduate degree in IDEAS and is currently pursuing her master’s in environmental policy design.

Wrestler Jordan Wood captured two awards at the Convocation: the Graduating Male Athlete Award and the John A. Cable Leadership Award. Wood became the first-ever five-time EIWA Champion and wrapped up his distinguished Lehigh career as a three-time All-American with a third-place finish at the NCAA Championships in Detroit. He holds a 3.39 GPA in management and was a four-time NWCA All-Academic Team member. Wood was a graduate of Flight45 and held leadership roles in many engagement groups including SAM and SAC.

Another field hockey student-athlete, Drew Pecora, received the Mary O. Hurley Female Leadership Award. Pecora was a team captain and a two-time first team All-Patriot League selection. Her leadership helped the field hockey program to its best season in nearly 30 years, with an 11-7 overall record, the program’s most victories since 1994. Lehigh also returned to the Patriot League Tournament for the first time in 10 years.

The John Steckbeck Award, presented to the top first-year female student-athlete, went to Madison Pineda from women’s golf. Pineda was a first-team All-Patriot League honoree after tying for third place at the league championship and was named Patriot League Rookie of the Year after posting seven top 10 finishes and posting the second lowest scoring average in program history.

The top first-year male athlete award, the J. Daniel Nolan Award, went to Max Brignola from wrestling. Brignola won a pair of open tournament titles during the fall semester for the Mountain Hawks and then was pulled from his planned deferred eligibility season to become the starter at 149 for Lehigh beginning in February. He qualified for his first NCAA Championship with a third place finish at the EIWA Tournament.

The department’s top service award, the Marlene “Linny” Fowler Service Award went to Teasha McKoy from women’s track and field. McKoy was a leader in the founding of Lehigh’s Student Athletes of Color and active in the setup of student-athlete TIDE She consistently went beyond her comfort zone to create change in an attempt to leave Lehigh in a better place.

Fifth-year Kara Bonner from the cross country and track and field teams won the department’s Sportsmanship Award. Bonner took a gap year in 2020-21 but still supported her teammates in her time away. Even when she missed time with injuries, Bonner provided support and consistent demeanor to her teams.

Nine student-athletes were recipients of the Distinguished Achievement Award. These recipients are senior student-athletes who have displayed a high level of scholarship, significant athletic achievement at the league level (and beyond) and demonstrated service to the institution. Winners included Foley, Wood, Havas, Pecora and McKoy, plus Kyle Burke from men’s cross country/track and field, Jaelynn Chesson from softball, and Teddy Leggett and Anthony Tangredi from men’s lacrosse.

Softball manager Michael Chavez was honored with the Phillip J. Sclar Award, which recognizes an underclass student worker or manager who exemplifies the spirit and character of the late Phil Sclar.