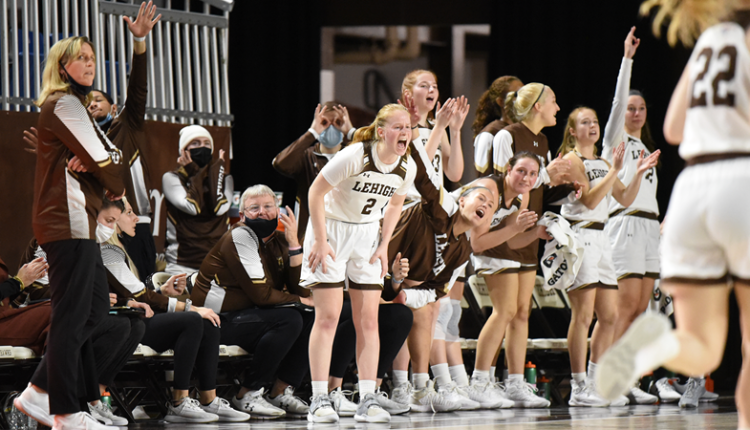 BETHLEHEM, Pa. — For the Lehigh women’s basketball team, it’s officially the most exciting time of the year as the Mountain Hawks begin their quest towards a second consecutive Patriot League title and fifth in program history Monday evening against Bucknell at Sojka Pavilion, tipping off at 6 pm

The winner will advance to the Patriot League Semifinals on Thursday night to face either top-seeded Holy Cross or eighth-seeded Navy.

Going through Lewisburg was a key to winning the championship a season ago, but this time around, it’s a round earlier as the Bison stood in the way of Lehigh advancing to the semifinal round for a fourth consecutive campaign.

The Mountain Hawks snapped a three-game losing streak by defeating Navy last Wednesday night in Annapolis, putting a halt to a stretch that including four losses in five games.

Lehigh was led by first year guard Kaylee Van Eps with a career-high 15 points against the Midshipmen. Frannie Hottinger registered her second double-double of the season with 13 points and 11 boards while Mackenzie Kramer scored 12 points on a pair of 3-pointers. Senior Emma Grothaus also tackled on nine points with three rebounds, most notably becoming the 21st member of the 1,000-point club at Lehigh and the seventh player in program history to tally at least 1,000 points and 600 rebounds.

Despite the large margin of victory over Navy, shooting was a little suspect at times, going 37.5 percent (24-for-64) from the field and 24.1 percent (7-for-29) from distance. The Mountain Hawks were 4-of-19 from beyond-the-arc in the last three quarters.

Bucknell is no stranger to success in the Patriot League Tournament, especially in the quarterfinal round, qualifying for the semifinal round in six straight seasons.

The Bison have won five of their last six games, finishing out the campaign with a dominant home victory over Colgate last Wednesday, 91-59.

In recent years, it’s been an all-out rivalry between Lehigh and Bucknell in women’s basketball with the Bison leading the all-time series, 50-44 including a 41-25 edge in Patriot League contests.

Bucknell has now won 11 straight games in the regular season, but had his overall series streak snapped by the Mountain Hawks in the Patriot League semifinals last March in Lewisburg.

Monday night’s game will be streamed live on ESPN+ (subscription required) and aired live on Fox Sports Radio 94.7 FM and 1230 AM in Easton with Steve Lomangino on the play-by-play call.