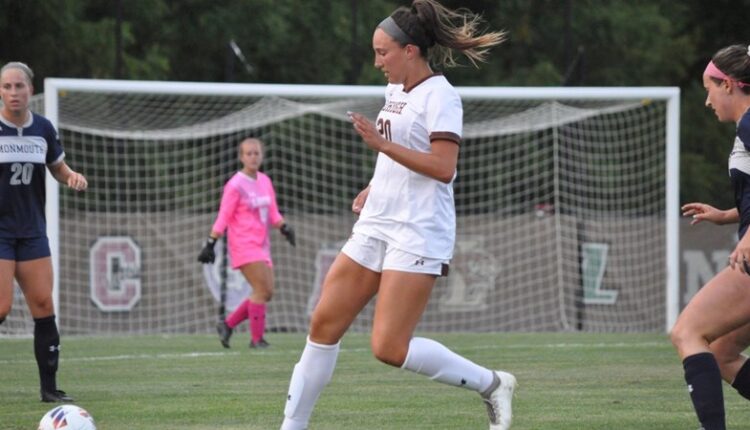 BETHLEHEM, Pa. – Following a two-game home stand, the Lehigh women’s soccer team is hitting the road for the first time this season to take on Delaware and Penn. The Mountain Hawks will travel to Newark, Del. on Thursday for a 7 pm kickoff against the Blue Hens. Lehigh will play his second road game of September on Sunday in Philadelphia against the Quakers. Opening kickoff is scheduled for 12 p.m. with streaming coverage on ESPN+.

The Mountain Hawks’ offense came to life last Thursday against Drexel. Sophomore Zoe Schutter scored the first goal of the season for Lehigh in the 48th minute to tie the game at 1. The Dragons answered with a quick goal to take a 2-1 lead but Lehigh showed no signs of backing down.

Seniors Mattie Murphy and Ryelle Shuey worked together on a free kick to tie the game at 2. Murphy, who took the free kick for the Mountain Hawks, laid the ball perfectly inside the six-yard-box, leading to a header from Shuey.

Drexel responded with a game-winning goal just four minutes later to secure the 3-2 win in Bethlehem. First-year Maggie Ousouljoglou made her first start for Lehigh in goal. Ousouljoglou ended the contest with two saves.

Delaware is 1-2-1 heading into Thursday’s contest. The Blue Hens opened up the 2022 season with a 3-0 victory over Delaware State but fell 1-0 in their most recent game against Richmond. Sara D’Appolonia leads Delaware with two goals and one assist. Mia Reed has tallied 20 saves in goal for the Blue Hens so far this season.

Thursday marks the 12th meeting between Lehigh and Delaware. The Blue Hens defeated the Mountain Hawks 2-0 in their last contest in 2019.

Penn stands 0-0-2 heading into a Thursday contest at Villanova. The Quakers started the season with ties against Temple (0-0) and Maryland (1-1). Sizzy Lawton has Penn’s lone goal this season while goalkeeper Laurence Gladu has five saves for the Quakers.

Lehigh will search for his fourth victory over Penn on Sunday. The last meeting came in 2018, with a double overtime 1-0 victory for Penn in Bethlehem. The last matchup in Philadelphia resulted in a 1-0 victory for Lehigh in 2017.

Following this weekend, Lehigh will travel to Siena on Thursday, Sept. 8 for a 4 pm contest. The Mountain Hawks will return to Bethlehem on Sunday, Sept. 11 to host St. John’s. Opening kickoff is set for 1 pm