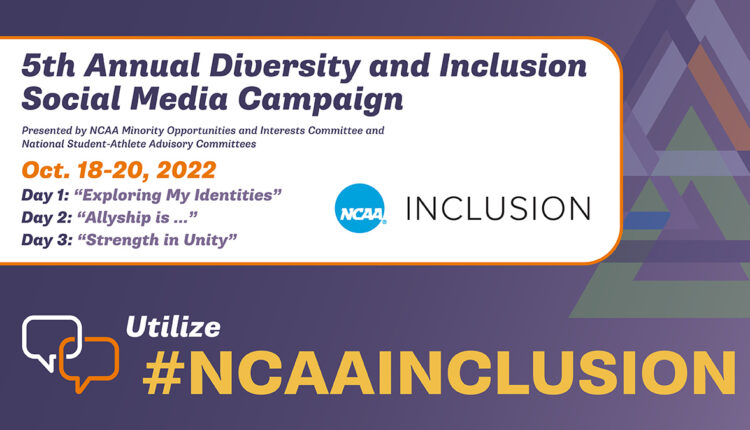 The campaign, in partnership with the Minority Opportunities and Interests Committee and the National Student-Athlete Advisory Committees, occurred nationwide from Oct. 18 to Oct. 20

Each of the three days centered around different themes and ideas. Kelly Rohrer, Lehigh Athletics’ multimedia coordinator, came up with prompts for Lehigh’s student-athletes and coaches to answer, which were then posted to various Lehigh sports teams’ social media channels.

Day one was titled “Exploring My Identities.” Rohrer said Lehigh student-athletes sent in videos or quotes talking about how they explore their different identities and perspectives.

Rohrer said one of the groups heavily involved in organizing this campaign was Tackling Inclusion, Diversity and Equity, a branch of the Lehigh Flight 45 mentorship program.

The group organized day two with an Instagram takeover.

Sophomore Patrez Thomas, a member of the track and field team, said the theme for day two was “Allyship is….” For this prompt, TIDE members interviewed members of the track team, cross country team and volleyball team on how they craft allyship and create communities.

Day three was titled “Strength and Unity.” For this topic, Rohrer said she reached out to coaching staffs to get their perspective of how they foster a sense of belonging on their teams.

Rohrer said the prompt given to the coaches was “How will (the coaches) continue along with their program to promote diversity and inclusion throughout the year?” These quotes were then posted to each team’s social media page to broadcast the mission and goals of the teams.

“I think it’s important for us as an athletics department to show that we are here to support all of our student athletes, and we are here as allies for them,” Rohrer said.

Athletes who participated in the campaign shared personal experiences and the positive impacts sports have had on them.

Sophomore men’s tennis player and TIDE member Mark Blekhman said being on a collegiate sports team has allowed him to meet new people.

“There are a lot of different people from different backgrounds and different walks of life that I would never have thought I’d meet,” Blekhman said.

Blekhman said he was also able to learn about the stories and backgrounds of international students playing sports at Lehigh.

“This campaign was really eye opening because we never really get to talk about these issues that often and I’m glad we were able to (so) in a setting with very open minds,” Blekhman said.

As a person of color, Thomas said he thinks Lehigh’s sports teams do a good job of being inclusive and adaptive.

Thomas said from participating in the campaign, he realized members of Lehigh sports teams are willing to adapt to different situations to make others feel welcome.

“Coaches do a good job of trying to ask diverse athletes if they have anybody they would recommend for the school,” Thomas said. “They want to make sure that we feel like we have more people coming in that are just like us.”

Thomas said even though the campaign is over, he hopes teams at Lehigh continue to have these conversations about equity and inclusion.

“One of the things that we could do better at is making sure that all of our coaches and athletics staff are educated about these topics because technically it isn’t part of their day to day life,” Thomas said. ”But just making sure they’re aware of our situation and how they can help and be supportive of all cultures and identities.”

KHN’s ‘What the Health?’: ACA Open Enrollment Without the Drama

Shapiro speaks of opportunity for Pa., delivers dire warnings about his opponent