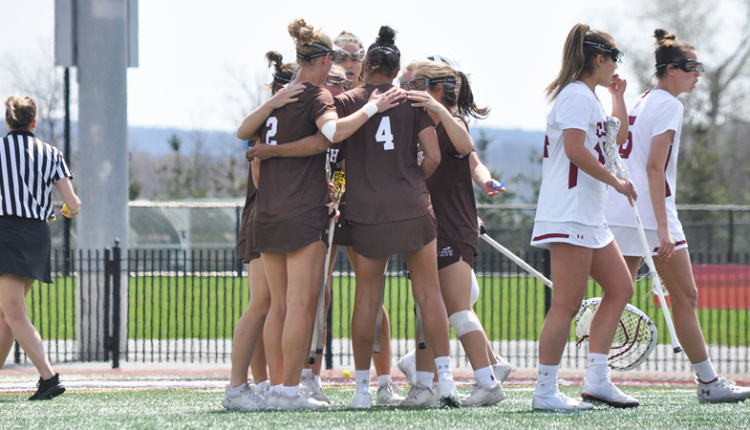 BETHLEHEM, Pa. – The Lehigh women’s lacrosse team used a 3-0 run to take a 4-2 lead, and the fourth-seeded Mountain Hawks wouldn’t trail the rest of the way, on the way to a convincing 12-7 win at fifth- seeded Colgate in the Patriot League Quarterfinals Sunday. In the process, the Mountain Hawks avenged their 10-9 loss at Colgate just three days prior in the regular season finale. Junior Kata Carnevale led the offense with five goals (to eclipse 100 career goals) while classmate Emma Eberhardt tallied four goals and an assist.

With the win, Lehigh will play at top-seeded Loyola in the semifinals on Thursday. Gametime is set for 3 pm The Mountain Hawks have advanced to the semifinals for the fifth time in the last six seasons. Lehigh was also the program’s first-ever true road win in the Patriot League Tournament (excluding neutral-site victories).

Along with Carnevale and Eberhardt’s nine combined goals, senior Nora Giordano scored a goal and dished a career-high four assists. The five points tied a career high. Junior Gabby Schneider had a goal and assist while first year Quinn Meyer scored a goal and sophomore Olivia Memeger recorded an assist.

The defense impressed against a Colgate offense that was averaging 13.75 goals over its four-game winning streak to close the regular season. On Sunday, the Mountain Hawks held the Raiders to just one goal over the first 26:13 of the second half (and only five goals over the game’s first 56:13). Lehigh also held Colgate scoreless for a stretch of 17:32 bridging the second and third quarters.

After Carnevale opened the scoring just over two minutes in, the Raiders responded to take a 2-1 lead. That’s the first and last lead Colgate would hold, however, as Eberhardt answered with a natural hat trick. She scored three straight goals – with 6:34 and 0:11 remaining in the first quarter, then 11:07 on the second-quarter clock – to put Lehigh up, 4-2. Eberhardt’s goal late in the first was a highlight-reel behind-the-back score to give the Mountain Hawks a 3-2 lead heading to the second.

— Lehigh W Lacrosse (@LehighWLacrosse) May 1, 2022 The Raiders twice pulled within one at 4-3 and 5-4, but four unanswered Lehigh goals (three in the first half and one in the second) gave the Mountain Hawks a commanding 9-4 leads. The goals were scored by Schneider, Meyer then two from Carnevale.

What a pretty goal. Eberhardt to Giordano to Meyer for the first-half score. Mountain Hawks lead Colgate 8-4 at the half.

— Lehigh W Lacrosse (@LehighWLacrosse) May 1, 2022 The Raiders pulled within 9-5 late in the third, but the Mountain Hawks erased any doubt with the first three of the fourth (from Carnevale, Giordano and Eberhardt) to take a 12 -5 lead, on the way to the 12-7 victory.

Eberhardt with her fourth goal of the day to give Lehigh the 12-5 lead!

She’s up to four goals and one assist while Carnevale leads the team with five goals.

— Lehigh W Lacrosse (@LehighWLacrosse) May 1, 2022 Final shots were 34-24 in favor of Lehigh while the Mountain Hawks held a 19-12 edge in groundballs. Colgate finished with a 15-8 edge in draw controls. Sophomore goalkeeper Hayley Hunt made 11 saves across a pair of Raiders’ goalkeepers, who also combined for 11.