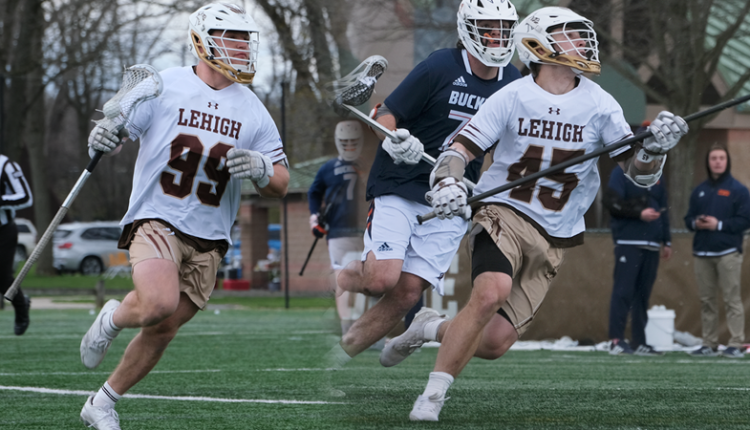 BETHLEHEM, Pa. – Following Sunday’s 13-12 win over Bucknell, a pair of Lehigh men’s lacrosse student-athletes were recognized with Patriot League weekly awards on Monday. Graduate student Teddy Leggett was named the league’s Defensive Player of the Week for the first time in his career, while senior Mike Sisselberger earned Faceoff Specialist of the Week for the third time this season – increasing his already Patriot League record number to nine in his career .

On Sunday, Leggett helped anchor a defense that held Bucknell scoreless for a stretch of 23:09 bridging the end of the first through third quarters, a key stretch of that game that allowed the Mountain Hawks to take control. In the process, he collected six groundballs – his fourth straight game with 6+ GBs (the first time that’s happened in his decorated career). For the season, Leggett owns 42 groundballs and a team-leading 19 caused turnovers.

Teddy Leggett has collected 6+ groundballs in each of his last four games and today was named @PatriotLeague Defensive Player of the Week 📹 pic.twitter.com/8JkL5pteyN

— Lehigh Lacrosse (@LehighLacrosse) April 11, 2022 Meanwhile, Sisselberger won 20-of-27 faceoffs with a season-high 15 groundballs. That came against Bucknell’s Nick Crovatto, who had won 53.1 percent of his faceoffs on the season coming in. Sisselberger was 11-of-13 in the second half and 15-of-18 over the final three quarters. For the season, he has won 66.8 percent of his faceoffs (161-of-241) with 96 groundballs.

11-for-13 in the second half, 20-for-27 in the game. Yesterday, Mike Sisselberger had a day and today was named @PatriotLeague Faceoff Specialist of the Week 📹 pic.twitter.com/lf5SwFMN0a

— Lehigh Lacrosse (@LehighLacrosse) April 11, 2022 Leggett, Sisselberger and the Mountain Hawks will hit the road on Saturday to face Colgate at 4 pm

Hear from @CoachCassese and senior Tommy Schelling after yesterday’s win over Bucknell 🔈 pic.twitter.com/2TTZTXWwCG

This Pa. bill would make the roads safer for bicyclists and motorists alike | Opinion