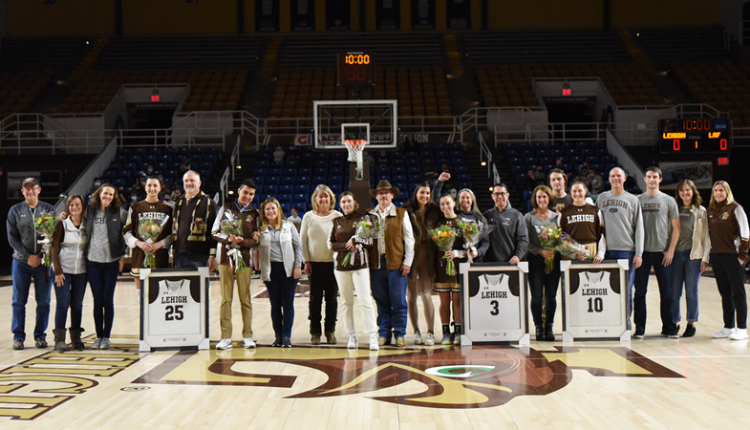 BETHLEHEM, Pa. – In its last home game of the regular season, the Lehigh women’s basketball team fell 65-61 to Lafayette having never led in The Rivalry presented by Lehigh Valley Orthopedic Institute on Saturday evening at Stabler Arena. The Mountain Hawks (18-10, 10-7 PL) drop their third consecutive game with just one more on the schedule. Seniors Emma Grothaus, Megan Walker and Clair Steele were recognized with a pre-game ceremony for Senior Night.

Sophomore guard Mackenzie Kramer led the way offensively for Lehigh, scoring a game-high 24 points with five 3-pointers and two rebounds. Grothaus added 12 points and grabbed a team-high 14 rebounds in her last regular-season game in Stabler Arena, which was good for her ninth double-double of the season. Steele added 9 points with four assists.

“I thought we got good looks at the basket tonight, we just didn’t put down a lot of shots,” said head coach Sue Troyan. “It’s been a little bit of our nemesis over the last couple of games. I didn’t think we played as hard as we needed to play. There may have been some distractions with a lot going on with Senior Night, but it’s a game that means a lot against your archrival and there’s a lot on the line going into the last couple games heading into the tournament.

“So, I hoped we would come out with a little better effort tonight. If we played with the same intensity from the last three minutes in the first 37 minutes of the game, I think it would have been a little different outcome.”

Grothaus started the scoring for the Mountain Hawks with a 3-pointer from the top of the key. First-year guard Ella Stemmer contributed a driving layup shortly after being subbed in. Lafayette led Lehigh, 10-5 going into the first media timeout.

Sophomore Jamie Behar drained a 3-pointer to end a four-minute scoring drought for the Mountain Hawks. At the end of the first quarter, Lafayette led 12-8.

Kramer ended a mini 8-0 run by the Leopards with a made 3-pointer and Lehigh’s first basket in six minutes. Steele continued the offensive comeback for Lehigh with a made fouled driving layup and a free throw. Junior guard Anna Harvey and Grothaus added a layup each to cut Lafayette’s lead 29-23 at halftime.

— Lehigh Women’s Basketball (@LehighWBB) February 27, 2022 Frannie Hottinger kicked off the scoring for Lehigh in the second half with a shot from downtown. Kramer followed shortly after with a 3-pointer of her own, cutting Lafayette’s lead to 33-29. A layup by sophomore forward Maddie Albrecht and a 3-pointer by Steele brought Lehigh within two, trailing 39-37 with 4:13 left in the third quarter. A 7-0 run by the Mountain Hawks, capped by two made free throws by Grothaus, tied the game at 39-39 with 3:14 left in the quarter. Lehigh trailed 48-44 going into the fourth quarter.

A Lehigh possession that featured three offensive rebounds was capped with a driving layup by Steele to bring Lehigh within two at 50-48 with 6:28 left in the game. A step-back basket by Kramer ended a 7-0 run by the Leopards and Lehigh found itself trailing 57-50 with 2:33 left. A late offensive charge was led by Kramer who scored nine points in the last 30 seconds, featuring two 3-pointers and three made free throws as Lehigh’s late offensive efforts fell just short with Lafayette prevailing for the 65-61 victory.

The Leopards were led by Makayla Andrews’ 23 points and Jessica Booth’s 13 while Makalia Wilson added 10 rebounds and both Booth and Abby Antognoli led the way with three assists.

“I think finding our shooting confidence is going to be important going into this final game,” Troyan said. “We certainly have not been good on the road shooting as of late. We’re a team that relies pretty heavily on the 3 and to have to go make another run at a Championship, we’re going to have to do it on the road. I think we have to take it one game at a time, but against Navy we have to find our confidence again and find our way.”

The Mountain Hawks will travel to Annapolis, Md., on Wednesday, to face Navy in the regular season finale before the Patriot League Tournament begins. Tipoff is scheduled for 7 pm from Alumni Hall and will be streamed live on ESPN+ (subscription required), as well as on Fox Sports Radio 94.7 FM and 1230 AM in Easton with Matt Markus on the play-by-play call.

The link between race and solitary confinement in Pennsylvania prisons | Analysis