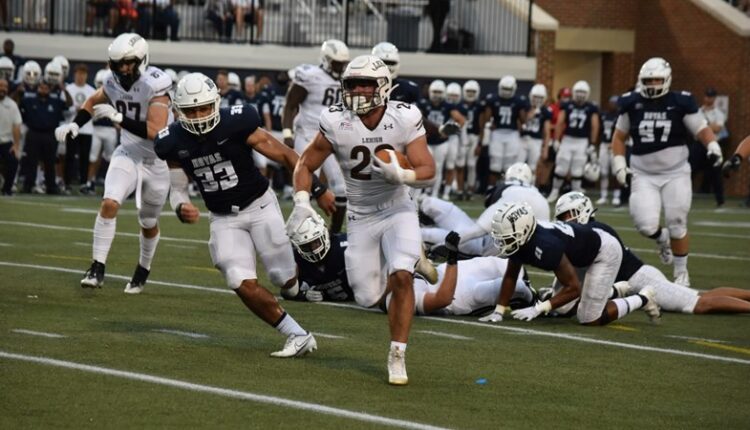 WASHINGTON – Lehigh raced out to a 21-13 lead early in the third quarter and while Georgetown scored with 1:04 to play the Mountain Hawks stopped the Hoyas’ game-tying two point conversion attempt to preserve a 21-19 win in the Patriot League opener for both teams at Cooper Field.

Lehigh rushed 31 times for 169 yards as a team with senior Zaythan Hill and sophomore Gaige Garcia both scoring touchdowns. The Mountain Hawks’ other touchdown was a 12-yard touchdown pass from junior Dante Perri to junior Eric Johnson, which gave Lehigh a 14-10 lead late in the second quarter.

Both teams are now 1-1 on the young season with Lehigh starting off league play with the critical win.

“When you dig that hole early, it’s hard to climb out so it was critical to start 1-0,” Lehigh head coach Tom Gilmore said. “We have some non-league games coming up to straight things out, but it’s always good to be ahead in the driver’s seat and it’s certainly a boost to our confidence. Our kids did a lot of good things last week, but we came up short. Our kids fought and battled.

“Winning a game like this is a really important thing,” Gilmore continued. “It proves to the whole program that we can win it in the end in a really tight battle like that, so my hat’s off to everyone involved.”

The host Hoyas jumped to a 10-0 lead five and a half minutes into the second quarter after a 23-yard Patrick Ryan field goal and a 19-yard touchdown pass from Holley to Brock Biestek, which capped an 89-yard drive following a Lehigh fumble.

Lehigh answered with a five-play, 74-yard drive. Hill broke a 70-yard carry on the second play of the drive and capped the drive with a one-yard touchdown plunge on 4th-and-goal.

On their next possession, the Mountain Hawks drove 62 yards in five plays, helped by a 38-pass from Perri to junior Jack DiPietro. Johnson’s first career touchdown reception put Lehigh up 14-10. A Georgetown field goal on the final play of the half cut Lehigh’s lead to 14-13 at intermission.

Lehigh opened the second half with a six-play, 76-yard drive. Garcia broke off a 27-yard run and then sprinted down the left side for a 25-yard touchdown, his first career score, which put the Mountain Hawks up 21-13.

“Offensively, we showed a lot of resilience,” Gilmore said. “If we make a mistake or we’re not good on one play, we’ll come back and do really well on the next one. The freshmen on the offensive line are going to be great players as they mature during the course of the season, and the course of their careers. They keep battling and we do that every week, we’re going to get better and better.”

From there the Mountain Hawks defense took over until the final drive, keeping Georgetown off the scoreboard and stopping the Hoyas on a pair of second-half fourth downs. Georgetown scored the late touchdown but Lehigh stopped the two point conversion to secure the victory.

“The touchdown was a heck of a play by them,” Gilmore said. “We stepped up and came up with a good call, credit to (Defensive Coordinator) Mike Kashurba. We knew what they were expecting and we gave them the opposite. They ran a play into the strength of the defense and our guys made a big play and kept them out of the end zone.”

Perri finished 12-of-18 for 137 yards with one touchdown and one interception. Johnson was the top target with four catches for 63 yards. First-year Geoffrey Jamiel also caught four passes for 14 yards.

Holley was 35-of-45 for 277 yards and two touchdowns for Georgetown. Tomas caught 13 for 124 and a touchdown and Dorrian Moultrie added 11 catches for 71 yards.

The Mountain Hawks will open their home schedule next weekend when they host the Richmond Spiders as part of Family Weekend, presented by PSECU. Game time is set for noon. Tickets can be purchased at LehighTickets.com or by calling 610-7LU-GAME during business hours.

EXTRA POINTS… Lehigh won its league opener for the first time since 2019 and have now won four straight games against Patriot League opponents… the Mountain Hawks are now 20-1 against Georgetown since the Hoyas joined the Patriot League in 2001… Georgetown held a 422 -306 edge in total yards, a 29-15 advantage in first downs and a 33:34-26:26 edge in time of possession… Harris had Lehigh’s other sack on the night… the Mountain Hawks finished with nine tackles for loss… prior to the game Georgetown “officially” dedicated Cooper Field.