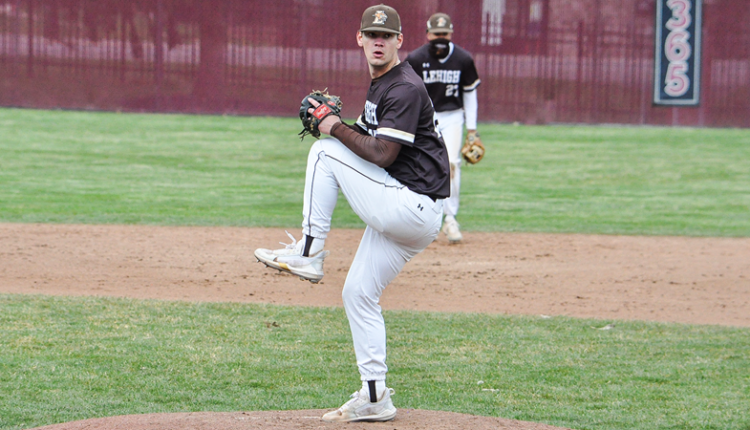 Lafayette tops Lehigh in both ends of Sunday’s doubleheader

EASTON, Pa. – After splitting Saturday at Kamine Stadium, the Lehigh baseball team dropped both ends of Sunday’s doubleheader against Lafayette, spoiling a strong Game 2 outing from junior right-hander Ben Christian. The Leopards (7-18, 3-1 PL) took both finals (7-4, 5-1) in the Sunday sweep as the Mountain Hawks (13-10, 1-3 PL) have fallen in three consecutive games to open the Patriot League slate for the 2022 campaign.

In the first of two, Lehigh battled back down 6-0 to score one run in the fifth and three runs in the seventh before recording two outs to end the ball game and fall 7-4. Christian was as good as you could ask for in Game 2 for the Mountain Hawks, throwing 7.1 innings of four-hit and one-run ball, striking out four and walking one against the 28 batters he faced. He retired at one point 10 consecutive batters but was saddled with the loss, his first of the season.

The Leopards scored six straight runs to open Game 1, putting the cherry on top in the fourth inning after a two-run SAC-fly foul out to first base after an error brought the second run across the plate. Pete Ciuffreda hit a solo home run as the very next batter to give Lafayette the 6-0 lead.

Lehigh’s rally started in the fifth inning on Riley Davis’ second home run of the season, a bullet over the right center field fence to trim the deficit to 6-1. The Leopards tackled on another on an RBI single in the bottom of the sixth, but the Mountain Hawks fought back in the seventh by way of back-to-back RBI doubles off the bats of Adam Retzbach and Justin Butler, making it a 7- 3 games. Andrew Nole grounded out to short to score Retzbach, bringing Lehigh back within three runs.

Andrew Kohl grounded out to third base to end the threat as Lafayette held on for the 7-4 victory.

No scoring was had for either side through the first five innings of Game 1 until Easton Brenner’s RBI double in the top of the sixth inning gave Lafayette a 1-0 lead. Justin Grech reached on an error, so the run was unearned against Christian.

A four-spot in the eighth inning off a sacrifice-fly and two fielding errors was the undoing for Lehigh as Lafayette surged ahead, 5-0.

The Mountain Hawks got a run back in the ninth after Chase Carlson reached on a fielder’s choice and Nole scored on an error to erase the shutout. Tyler Young grounded out to end the game as the Leopards took Game 2 by a score of 5-1.

Retzbach ended up going 2-for-5 on the afternoon with a double, while Butler also added two knocks with a two-bagger. Retzbach, Butler, Davis, Carlson and Nole each drove in a single run between the two games.

Lehigh will host Rider Tuesday afternoon at 3 pm from J. David Walker Field for the first round of the Liberty Bell Classic. The contest will be streamed live on ESPN+ (subscription required).

Here’s the gender pay gap by state. Where did Pa. fall? | The Numbers Racket