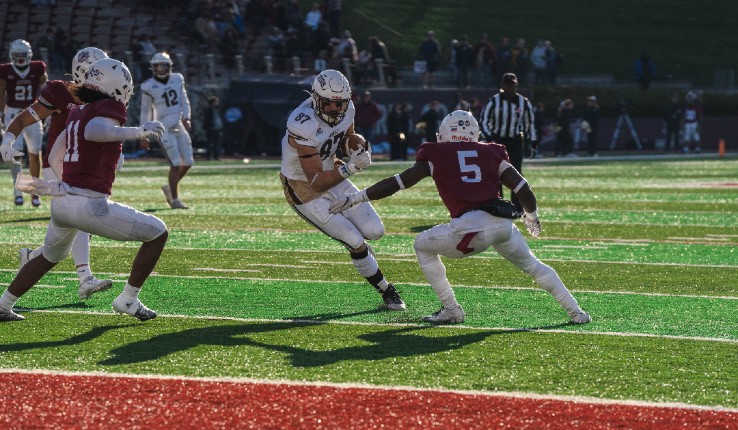 Lafayette Holds on to Early Lead, Tops Lehigh in 158th Edition of The Rivalry

“Two big mistakes in the first quarter and that’s all they needed,” Lehigh head coach Tom Gilmore said. “Which is really frustrating because we moved the ball pretty well throughout the game, but we didn’t finish drives. It was not finishing drives, giving up maybe a handful of plays on the defensive side of the ball and the most bizarre punting game we’ve seen.”

The Mountain Hawks scored their first points of the game with just under five minutes left in the first half on a Dylan Van Dusen 27-yard field goal. A 13-yard touchdown pass from Perri to Eric Johnson early in the fourth quarter cut Lafayette’s lead to six points as the Mountain Hawks failed to convert a two-point conversion attempt, but Lehigh didn’t score again until Lafayette intentionally took a safety with 14 seconds remaining.

With the win, the Leopards finish the year with a .500 record against Patriot League foes. Lafayette has now won three of the last four meetings with Lehigh and leads the all-time series between the two Lehigh Valley schools 81-72-5.

Click here for more coverage of the 158th edition of The Rivalry.