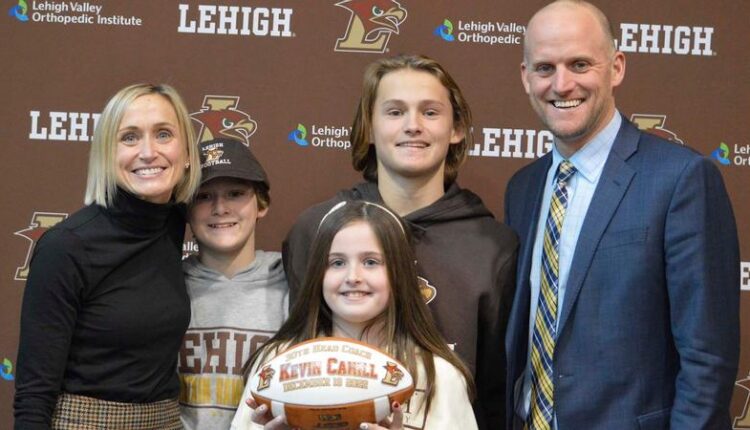 BETHLEHEM, Pa. – Following an extensive search, Lehigh has named Kevin Cahill the 30th head football coach in program history. A coaching veteran with more than 20 years of experience, Cahill comes to Lehigh following 10 seasons at Yale University, where he was a member of the coaching staff for three Ivy League championship teams and oversaw one of the nation’s top offensive units.

“I am deeply grateful to and highly impressed by the work of our search committee and appreciative of the many other people at Lehigh who engaged in supporting our search and evaluation processes,” said Lehigh Dean of Athletics Joe Sterrett ’76. “The search process was thoughtfully executed, with sensitive consideration of the input from our team prior to the search and our staff throughout the evaluation process. I view Kevin as a very talented, successful yet grounded individual, a strategic thinker, and a coach that our players will respect and find trustworthy and inspiring. I look forward to welcoming Kevin and his family to Lehigh and to working with and supporting him in addressing program priorities.”

Since 2018, Cahill has served as Yale’s Associate Head Coach and Offensive Coordinator, working directly with the quarterbacks. In 2022, the Bulldogs went 8-2 overall and 6-1 in Ivy League play to capture their third Ivy crown in the last five seasons. Yale boasted the top-ranked offense in the Ivy League and ranked in the top 25 in the FCS in total offense for the fourth time in the last five seasons.

“Lehigh is more than a football team, it is a family with a football program,” Cahill said. “Generations have built this program into an organization that is ready to win. This program celebrates student-athletes, values ​​dedication and produces young people ready to make an impact when they graduate. Thank you to President Helble, Joe Sterrett, Sue Troyan and the hiring committee for this opportunity to be a part of the Lehigh legacy. Now, let’s get to work!”

Under Cahill’s guidance, Yale quarterback Nolan Grooms thrived in his first full season as a starter. Grooms threw for 1,660 yards and 14 touchdowns and added 745 yards and six touchdowns on the ground on the way to winning the Asa S. Bushnell Cup as the Ivy League’s Offensive Player of the Year.

Cahill initially came to Yale as Special Teams Coordinator and Wide Receivers Coach in 2012 and took over the quarterbacks in 2014 while also serving as Assistant Head Coach and Passing Game Coordinator. His highly-touted offense helped Yale capture Ivy League titles in 2017 and 2019 in addition to the 2022 championship. Yale had the No. 1 offense in the Ivy League in three of Cahill’s 10 years on staff. Since 2014 Yale has ranked in the top 25 nationally in total offense five times and ranked in the top 25 in scoring offense on four occasions.

In addition to Grooms, Cahill mentored Kurt Rawlings, the 2019 Ivy League Offensive Player of the Year, who is Yale’s all-time leading passer, 2018 Ivy League Rookie of the Year Griffin O’Connor, and Morgan Roberts the No. 2 passers in Yale history.

“Kevin was quite impressive among a really strong pool of candidates, which made the final decision very challenging for the search team,” said Lehigh Deputy Director of Athletics Sue Troyan, who led the search committee. “In the end, the evidence of his strong and enduring relationships with team members, his fresh outlook and detailed vision for our program, his fundamental skill as a teacher and developer of young people and his optimism and passion about the people he met and opportunity at Lehigh influenced the final decision. The breadth and diversity of his experiences will be valuable as he engages with our team, our alumni, our university and our Lehigh Valley community.”

Cahill moved on to Yale following four seasons on the staff at the University of Maine, including three as Special Teams Coordinator, while also coaching the wide receivers and running backs during his tenure. He helped the Black Bears to a pair of FCS playoff appearances and mentored six all-conference performers including All-Americans Jared Turcotte and Jhamal Fluellen.

During the 2006 and 2007 campaigns, Cahill coached at Murray State University, where coached the wide receivers and was the Racers’ Recruiting Coordinator. He mentored two all-conference student-athletes.

Cahill’s first Division I experience was at the University of Tennessee-Martin in 2004 and 2005, where he helped the program record its first winning season in 13 years. He began his coaching career at Maine Maritime Academy in 2001 before returning to his alma mater, Springfield College for two seasons.

A native of New York Mills, NY, Cahill graduated from Springfield College in 2001 with a degree in physical education. He added a masters in athletic administration from Springfield in 2004.

Cahill and his wife Carah have three children: sons Patrick and Thomas and a daughter Elizabeth.

WHAT THEY’RE SAYING ABOUT KEVIN CAHILL

“Kevin has been one of my closest friends for more than a decade. I’m thrilled to see him get this opportunity. He’s a fantastic coach, a great person and a terrific mentor to young men. Lehigh made an outstanding hire.” – Joe Conlin, Head Coach, Fordham University

“Toni and I are extremely excited for Kevin and Carah. Kevin has been with us since we came to Yale 10 seasons ago and has been instrumental in our success. He is a tremendous football coach and an even better mentor and person. I am proud of Kevin and so excited for him and Lehigh’s future.” – Tony Reno, Head Coach, Yale University

“Kevin Cahill is a teacher, mentor and competitor. Kevin has had a profound impact on my career and it has been an honor to play for him and coach alongside him. He holds high standards for himself and those around him. Kevin gets the most out of his players because he cares about them as people first. I’m very excited for Kevin, his family and Lehigh football!” – Jordan Stevens, Head Coach, University of Maine

Bowie, Bing and a Christmas wish for peace on Earth | Friday Morning Coffee