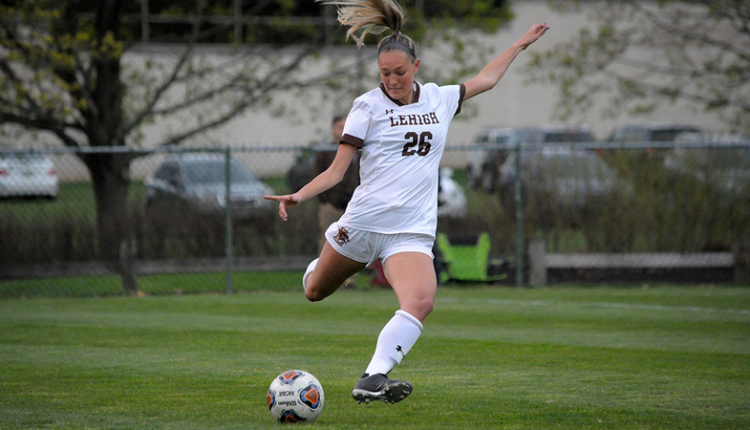 BETHLEHEM, Pa. – A strong defensive effort had the Lehigh women’s soccer team headed for a positive result against St John’s. Then fifth-year Erin Keefe finished the job. Keefe scored her first collegiate goal, rocketing home a volley from the top of the 18-yard box in the final minute to give the Mountain Hawks a 1-0 victory over St. John’s on a rainy Sunday at the Ulrich Sports Complex.

The Mountain Hawks pitched their first shutout of the season and picked up their second win of the week to improve to 2-3-1 on the season. St. John’s, which reached the sweet 16 at last year’s NCAA Championships, falls to 3-2-2.

“We’ve been talking about how to hold the integrity of our backline,” Lehigh head coach Lauren Calabrese said. “We’ve been doing a lot of film review and so it’s not just the back line but also our entire team in terms of being behind the ball and how we want to defend, so super pleased with our efforts and how we’re becoming more consistent with those habits.”

Shots finished 9-7 in Lehigh’s favor, including a 6-4 edge in shots on goal. First-year goalkeeper Maggie Ousouljoglou made four saves to earn her first clean sheet, while Keefe spearheaded the strong defensive effort with a number of strong tackles to thwart Red Storm opportunities.

“It has taken us a few days but we’re seeing the consistency of the principles we’re looking to execute,” Calabrese said. I’m pleased with how Keefe and Ryelle (Shuey) led in the back. Imani (Ashman) and Dakota (Russell) did great. Maggie in terms of keeping us organized, it’s really been an important point of emphasis for us to make sure we’re communicating consistently.”

Ousouljoglou made three saves in a scoreless first half.

Junior Emma Roesing had a quality chance early in the second half, racing in and putting a volley on net, but Gina Muzi made the save for St. John’s.

Lehigh was awarded a corner kick early in the final minute and senior Mattie Murphy’s delivery was deflected towards the top of the box, where Keefe came in and volleyed the shot past Muzi with 47 seconds remaining.

“Erin came up big,” Calabrese said. “I think the past few games she’s been adjusting to the new system and how we’re playing so it was well deserved not only on the offensive side coming in clutch but also really improving defensively, so really happy with her efforts.”