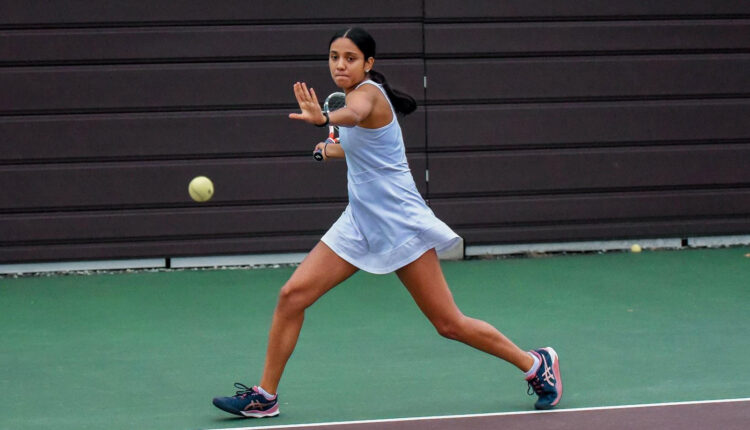 This, combined with tennis being a way to get exercise, led Javagal to begin playing tennis for her local YMCA club team in Nashville, Tennessee, before she turned 10 years old. As she got older, Javagal began to play in competitive tennis tournaments.

“I started playing tournaments, and I really liked the competitive aspect of it,” Javagal said. “I started wanting to play more and more matches.”

Freshman Hamsa Javagal and junior Junmoke James finish their doubles match against the Marist Red Foxes in the first match of the Spring season on Feb. 5. Javagal was named Patriot League Player of the Week on March 1. (Alli Kimmel/B&W Staff)

Once she started seeing winning results, Javagal decided to commit to playing tennis at the collegiate level.

Javagal said her transition to Lehigh went smoothly, thanks to the small size of the team.

“Making friendships with (my teammates) kind of helped me feel like it was a family here and helped me achieve everything I’ve achieved because I have a support system as well,” Javagal said. “One of the reasons I chose Lehigh was because everyone was just motivated and open to bringing in new people and making long lasting connections.”

Dania said that Javagal has done a great job of getting integrated with the team and has been a leader since the beginning of the season.

“Having a small team just allows you to have more interaction with those people,” Javagal said. “So it does make you closer.”

Part of the transition from high school to collegiate tennis is balancing a rigorous practice schedule with the demands of a college workload.

Javagal said she has been able to maintain a good balance between academics and her practice schedule.

Javagal attributed some of the credit for maintaining a healthy balance to the coaching staff.

“Our coaches make sure to give us time off when we need it and are always checking up on how we’re physically feeling,” Javagal said.

Javagal said that match-day preparation has also played a role in her freshman year transition.

When preparing for a match, Javagal said she eats a good meal beforehand and gets to matches early to listen to music and get in the right mindset.

Javagal was named Patriot League Player of the Week on March 1. On the weekend preceding her award, the team defeated both Siena and Saint Francis 4-3.

Javagal defeated Siena’s Meagan Brown (6-4, 7-5) in the No. 1 single spot. This was Javagal’s first time playing in the first singles spot. In every previous match she played No. 2 singles.

Her performance against Siena earned her the No. 1 single spot the next day against Saint Francis. Javagal won her singles match again, this time 6-4, 6-3. Javagal and junior Junmoke James also won their doubles match 6-2. 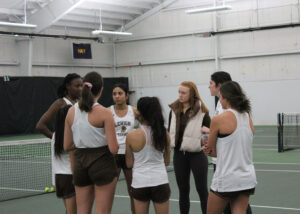 The Lehigh Women’s Tennis team gathers around Isabella Franks, the team’s graduate assistant coach, prior to the start of their game. The players prepared to face the Marist Red Foxes at the Lewis Tennis Center on Saturday, Feb. 5, 2022. (Alli Kimmel/B&W Staff)

Javagal said she was excited to learn she was named Patriot League Player of the Week.

“I’ve been having a really good start to the season,” Javagal said. “I kind of want to finish off the season how I started it, and I’m thrilled to have received that award.”

Sophomore Megha Dania said it was awesome that Javagal received the award.

Megha Dania said that it’s great to be working toward the level of competition that Javagal brings.

“It definitely helps the team a lot because it increases not only the tennis level, but the competition level and it just increases the bar,” Megha Dania said.

After her win against Siena in the No. 1 single spot, Javagal has claimed the spot in every match since. She has also played in the No. 1 double spot with James.

Javagal has gone 3-4 in singles matches in her new spot.

“Whether in practice or when she’s competing in a real tournament, she always gives her best in everything she does,” Anushka Dania said. “Until the last point she’s always fighting.”

The women’s tennis team currently sits at 4-6 overall and 1-2 in conference play as they begin the Patriot League-heavy portion of the schedule.

The Mountain Hawks play next against Bucknell on April 2.

Lehigh will host the Patriot League tournament on April 21-24.