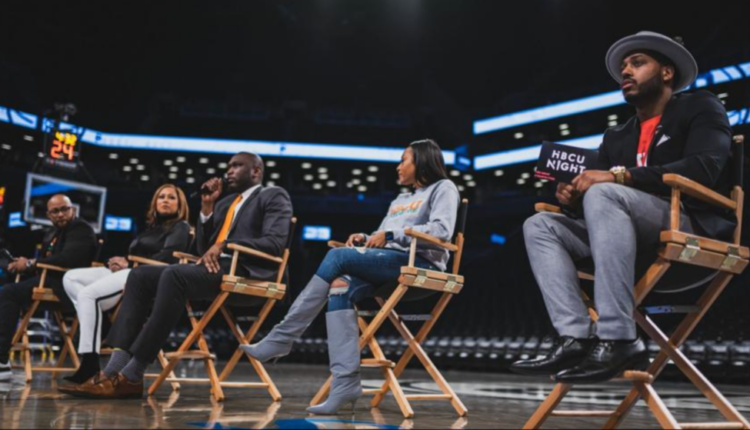 “This is our first time bringing HBCU Night to Philadelphia and we’re really excited about that because there are HBCUs in Pennsylvania and in Delaware,” said founder and CEO of HBCU Buzz Luke Lawal Jr.

“For us, it’s just trying to attack those high school students who are looking to go to HBCUs and provide those students with a direct connection and also see what HBCUs have to offer,” he said.

“We partnered with a lot of the local alumni associations to come to the stadium and provide resources for students to apply or get same-day admittance,” Lawal added.

Lawal, who is an alumnus of Bowie State University and a member of Omega Psi Phi fraternity, came up with the idea of HBCU Buzz after realizing there was a gap of how HBCUs were covered in the news.

Since 2011, HBCU Buzz has been a news hub for prospective students, current students, and alumni who attended historically Black colleges and universities.

From campus news to information on alumni, sports, and entertainment, the media outlet has coverage of more than 100 HBCUs and has worked with Fortune 500 companies.

“Whenever something good happened at Bowie people weren’t talking about it, but if someone died on campus it was publicized,” Lawal said.

“I think that same year someone got killed (at Bowie State),” he added. “That was the first time I ever saw the press on campus so it was just like, ‘Wow, how can we change that perception?’ That’s why I started HBCU Buzz.”

“Dre reached out to me and told me he wanted to figure out a way to get more HBCU students and graduates at the Barclay Center,” Lawal said.

“However, there were a large number of high schools who didn’t know what a HBCU was so then we shifted our focus to alumni who can come to Brooklyn to talk about what HBCUs have to offer,” he said.

“When we first started we had about 30 students, but at our last event we had 600 students,” Lawal added. “Both of our organizations have similar missions so it was only fitting that we partnered up to get more students to attend HBCUs across the country.”

Among the events at the Wells Fargo Center is a college fair, panel discussion, and social events for alumni.

The panel discussion, titled HBCU Talks, will be led by Lawal, founder and CEO of HBCU Week Foundation Ashley Christopher and founder and president of the College Gurl Foundation Jessica Brown. Martin will be the moderator of the discussion.

In previous years, HBCU Night, Inc. hosted a slew of in-person college fairs, career fairs, educational panels, and alumni fundraisers. During the pandemic, the organization kept momentum going with the launch of their virtual college fair series, A Digital World.

In 2020, the organization connected over 38,000 scholars to HBCU recruiters and helped facilitate over $52 million in scholarships to students in over 1,200 cities globally.

“During the panel discussion, we will be discussing the importance of HBCUs and our experiences,” Lawal said. “The kids will be able to ask us whatever they want.

“What’s really unique this year about the panel discussion is that we have people on the panel who can give out opportunities and scholarships,” he said. “We’re also doing social events for alumni.

“We have like a HBCU takeover at the stadium where we bring in Greek fraternities and sororities and they will perform at halftime during the game,” Lawal added. “There’s always a social Happy Hour element where alumni can also socialize. It’s going to be a great day not just for students, but also alumni as well.”

Lawal said what he wants students to take away from event is the excitement to go to a HBCU.

“I want them to be thrilled to attend an HBCU,” Lawal said. “The goal of this event is to give them a glimpse of what their life could be like on campus. If we’re able to get more students to go to HBCUs then we’ve done our jobs.”

Readers and Tweeters Remain Vigilant on Masking and Billing