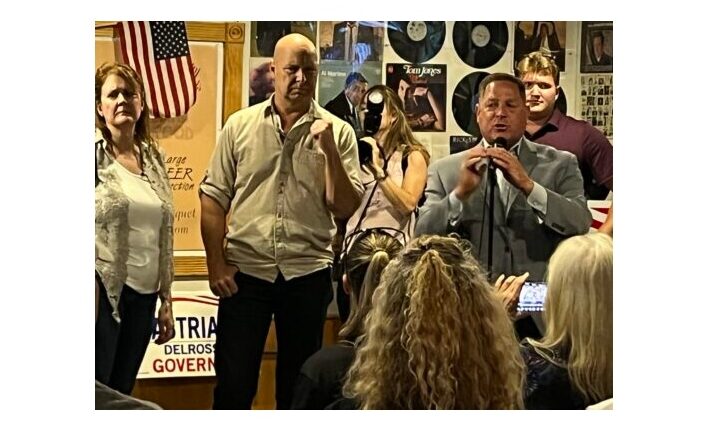 In a campaign swing through southeast Pennsylvania on Wednesday, Republican gubernatorial nominee Doug Mastriano rallied supporters with reminders of the pandemic and social unrest that defined the middle years of his opponent’s last term as attorney general.

Mastriano told crowds in Montgomery and Delaware counties that his election would restore freedom to Pennsylvania.

“If you want our kids to grow up with the same freedoms you have here, we got to beat him bad,” Mastriano said, speaking to about 100 people gathered in the parking lot of a roofing business in Pennsburg, Montgomery County.

“What’s my vision for Pennsylvania here? To restore freedom. To hand powers back over to where it always should be. And we stand for the freedom of all men and women – all Americans. I just don’t swear allegiance, like Josh, to my party,” Mastriano said.

“We don’t want male domination on women’s athletic teams anymore. So girls, you will have a level playing field to restore that Josh Shapiro wants to roll back the clock 50 years on what you have worked so hard for with Title IX,” Mastriano said.

As attorney general, Shapiro stood up for transgender rights, joining legal fights to allow transgender students to use the facilities corresponding to their gender identity. In June, Shapiro spoke out against a Republican-backed bill that would have barred transgender students from women’s interscholastic sports, calling it “nothing more than cruel.” Wolf vetoed the legislation.

Mastriano, a retired U.S. Army colonel elected to a south-central Pennsylvania state senate district in 2019, was an unlikely victor in a crowded Republican gubernatorial primary.

“We’re going to dig and drill like there’s no tomorrow,” Mastriano said.

His energy policy would include dropping out of the Regional Greenhouse Gas Initiative, a compact between northeast states to cut carbon emissions from power plants that Pennsylvania joined in April. Mastriano’s energy plan would also include the construction of natural gas export terminals in Philadelphia and Erie, he said.

“I pledge to become No. 1 in energy production under Gov. Mastriano,” Mastriano said.

He has also vowed to roll back what he said were the thousands of regulations on business and industry implemented during Wolf’s terms.

As a candidate, he faced criticism for his presence in the U.S. Capitol grounds as supporters of former President Donald Trump swarmed and broke into the building, temporarily halting the certification of presidential election results.

Mastriano has also been denounced by Jewish leaders for his use of the alt-right social media platform Gab, which critics call a haven for hate speech, to engage potential voters. The gunman accused of killing 11 worshipers at The Tree of Life Synagogue in Pittsburgh in 2018 was a frequent user, posting about his plans minutes before the killings.

Shapiro and some members of his own party have labeled Mastriano too extreme because of his suggestions that as governor he could decertify election machines and end gay marriage; and because of his dismissal of climate change as “fake science.”

Absent from Mastriano’s remarks Tuesday was any anti-abortion rhetoric. The only reference came from Mastriano’s wife, Rebbie, who listed the right to be born among Republican women’s rights.

The first bill that Mastriano co-sponsored as a senator in 2019 was a bill that would ban abortions after six weeks’ gestation, which is before most people know that they are pregnant.

Since the primary and the Supreme Court struck down Roe v. Wade, Mastriano has seldom mentioned abortion.

Journalists were not permitted to enter the grounds of the Montgomery County business where Mastriano spoke Tuesday morning.

This is as close as I can get to where Mastriano is going to speak. pic.twitter.com/md6elmVpkJ

Those present were directed to a roped-off area on the front lawn of the business out of sight of the area where Mastriano spoke. (His amplified speech could be heard from an adjacent parking lot.) Throughout his campaign, Mastriano has refused to engage with most media outlets, preferring to appear on conservative talk radio and social media livestreams.

At a later appearance at a pub in Aston, Delaware County, Mastriano dismissed an analysis of his school choice plan by the Pennsylvania State Education Association as “garbage.” He also called news reports on the analysis, shameful echoing of a “propaganda piece.”

Mastriano has said that he would eliminate property taxes to fund public education and reduce per-pupil spending to as little as $9,000 from the statewide average of more than $19,000.

Mastriano said the reports fail to mention his vote for a historic $850 million increase in education funding in this year’s budget, but the PSEA analysis concludes more than $6 billion in additional state revenue would be needed to offset the loss of local property tax revenue, even at the reduced per-student spending levels Mastriano proposes.

Lehigh Starts New Season on the Road at Temple Thursday