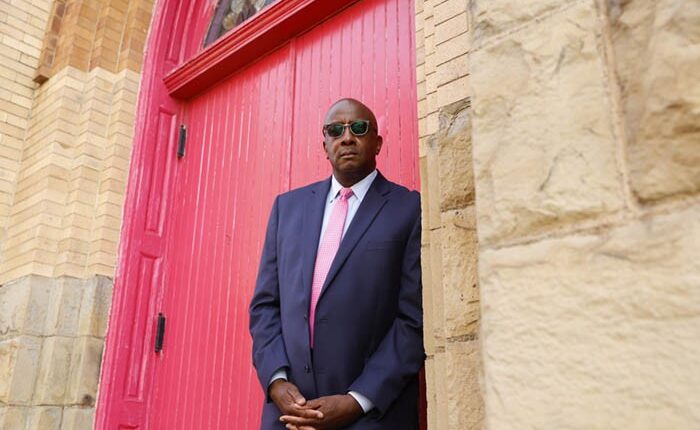 PITTSBURGH — As a Black man in America, the Rev. Richard Freeman is used to right-wing extremism. He’s seen it firsthand.

But he’s seen it gain new prominence in the past decade, and more and more, he’s seen it spread by those who claim to represent his faith.

“I grew up in the South, okay? This isn’t new to me. It’s just louder than I’ve seen it in a long, long, long time. It’s louder than it’s ever been in my lifetime,” the 62-year-old pastor of Resurrection Baptist Church in Braddock told Pittsburgh City Paper.

Pittsburgh has developed a reputation as a prominent spot within the rising Christian nationalism movement, fanned by the rhetoric of Pennsylvania’s Republican gubernatorial nominee Doug Mastriano. While he refutes the label, Mastriano often is criticized for engaging in Christian nationalism talking points.

Christian nationalism is exactly what it sounds like: a fusion of Christianity and nationalism. An online statement called “Christians Against Christian Nationalism,” which has been endorsed by Christian leaders across the country, provides a definition of the term:

“Christian nationalism demands Christianity be privileged by the State and implies that to be a good American, one must be Christian,” according to the statement. “It often overlaps with and provides cover for white supremacy and racial subjugation.”

Because of this overlap with white supremacy, the term is often rephrased as “white Christian nationalism.”

A May 2021 New Yorker article identified Mastriano as the embodiment of a “resurgence” of Christian nationalism. Mastriano made headlines for referring to the separation of church and state as a “myth.” Mastriano has developed controversial relationships with Pennsylvania churches, including Grace Life Church in Pittsburgh, where Mastriano spoke and received a legally-questionable endorsement in September, according to Pittsburgh’s Action 4 News.

Mastriano, who faces Democratic nominee Josh Shapiro, did not respond to a request for comment regarding the characterization of him as a Christian nationalist.

However, the fact that Mastriano clinched the Republican nomination makes many concerned about Christian nationalism’s hold in the state, and the concern goes beyond Mastriano. Michael Flynn, who briefly served as U.S. National Security Advisor at the start of the Donald Trump administration and is often associated with the far-right conspiracy theory Q-Anon, embraced the term as someone who “believe[s] in God and…“love[s] their country,” during a Pennsylvania stop of a “ReAwaken America” tour.

Some among the region’s religious community say they are alarmed by what they see.

Freeman spoke at an August press conference  against Christian nationalism because of his concern about the rising movement. He says his church, primarily attended by people of color, knows these issues very well and talks about them often.

“Let’s make no bones about it: the Ku Klux Klan started with the same kind of mantra. It was the face of the church supporting and standing for the nation, which was frankly for white America,” Freeman says. “And the language is different, but the intent is very much the same.”

Shannon Garrett-Doege says she fosters a strongly progressive atmosphere as the pastor at Community of Reconciliation Church in Oakland. She’s alarmed by Christian nationalism, which she sees as an affront to her Christian values.

“Christian nationalism is antithetical to Christ,” Garrett-Doege said. “It doesn’t make any sense… it’s almost hard for me to get my head around.”

Members of the congregation have talked with her about family and other churches sharing opinions that seem to orbit around Christian nationalism.

“We did have some congregants who were reporting that they had family members who were Christian and who were not taking vaccines because of their particular theology,” Garrett-Doege said. “And that theology typically went back to this kind of white, Christian, national, patriotic identity that they had some kind of special protection that other people didn’t have.”

Vincent Kolb, pastor of Sixth Presbyterian Church in Squirrel Hill, and the president of the Pennsylvania Interfaith Impact Network, says his faith rejects Christian nationalism as a sin of idolatry.

“We think you can love your country and be critical, as a citizen, of its policies, its direction, and that does not mean that you don’t love your country,” Kolb said. “But the notion of loving your country to the point where one cannot question what’s going on, socially or politically, is dangerous.”

What is Gab? A look at the far-right social media platform backing Doug Mastriano

People of other faiths have also condemned Christian nationalism. Rabbi Jamie Gibson, who retired after leading Temple Sinai in Squirrel Hill for about three decades, wrote an opinion article speaking out against white Christian nationalism for the Pittsburgh Jewish Chronicle, noting that practitioners of the ideology have proved violent and raising the 2018 Tree of Life shooting as the clearest example.

“White Christian nationalism is a direct threat to the physical safety and spiritual well-being of the vast majority of Pennsylvanians who do not believe as they do,” Gibson wrote.

Gibson wrote that he is a “proud representative” of the activist group PGH Jews United Against Extremism.

Marla Werner and Sue Berman-Kress, respective residents of O’Hara Township and Squirrel Hill and members of the group, discussed this wave of extremism with members of the Pittsburgh area community. To start, they shared shocking quotes from political figures to get people’s investment. Then, they asked those people to sign on to a letter against right-wing extremism like Christian nationalism. About 400 people have signed.

“Part of our goal was to get a community conversation going. So whether your name is on the ad or not, you probably received a copy of this email letter, because it sort of went around,” Berman-Kress told Pittsburgh City Paper. “Some people said they received it five times from different people they know, and it really got our community activated and talking about extremism and about the danger of that.”

“The rise of Doug Mastriano, and his rhetoric, which is explicitly Christian nationalist and somehow sort of militarist at the same time … for me, I understand that following Jesus, part of that is the rejection of violence,” Swanson says.

Swanson said he believes in a separation of church and state because of a strong support for religious freedom and also because he thinks Christianity can be much more powerful and beautiful if separated from government.

“The state, as necessary and good as it is, falls short of the role of love, which is the center of religious life,” Swanson said. “And so, Christian communities and communities of faith beyond Christianity as well but certainly Christianity as I understand it, requires kinds of forbearance and mercy and forgiveness and reconciliation that the state can’t do and it wouldn’t be even appropriate for the state to [do].”

Matt Petras is a reporter for Pittsburgh City Paper, where this story first appeared.