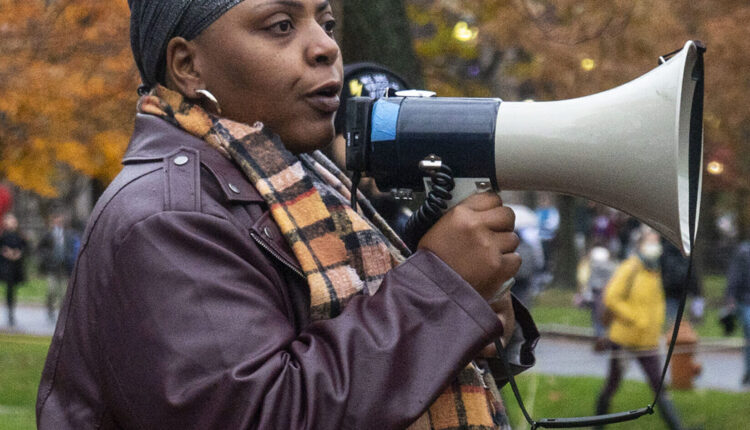 In one Philly neighborhood, a fight against gentrification – block by block

PHILADELPHIA — Walking around the blocks near the University City Townhomes in West Philadelphia, resident Rasheda Alexander, a single mom who works with the city’s unhoused community, pointed out the changes that had been made.

Alexander pointed to the former site of The Consortium, a recovery-oriented, nonprofit community mental health center, which now houses a plant store and physical therapy practice.

From blocked off construction sites to high-rises and medical centers towering over generations-old brownstones, gentrification can be seen everywhere.

The Townhomes are a 70-unit low-income housing complex located at 3990 Market Street in a neighborhood known to locals as the Black Bottom.

The Black Bottom is a historically Black community that had been displaced partially by both Drexel University’s and the University of Pennsylvania’s continued development in the area.

The fight to save the Townhomes started in 2021 when the residents were told that IBID Associates, the Townhomes’ owners who are now a part of the Altman Management Group, would not be renewing their affordable housing contract with the U.S. Department of Housing and Urban Development (HUD).

For close to four years, IBID Associates had been renewing this contract after buying the property for $1 in 1982, according to the Philadelphia property search site.

According to the Save the UC Townhomes coalition, the residents were told they had a year to find, and move to, newer housing elsewhere. However, in July 2022 their move out date was pushed back after their HUD housing vouchers were delayed.

As of this writing, the date has been pushed back four times this year alone, and the residents have until January 31, 2023, to move out.

Aiding in the Townhomes resident’s fight are local students and concerned citizens. Over the summer members of the coalition Save the UC Townhomes set up an encampment as a form of protest. But, on August 8th the Sheriff’s office cleared the encampment out, the Daily Pennsylvanian, the student newspaper of the University of Pennsylvania, reported.

Afterwards, the coalition announced that it had plans to purchase the property themselves but in order for that to happen, changes would need to be made. According to ABC6-TV, in Philadelphia, Ibid/Altman would first have to sell to a third party that would maintain the Townhomes, the city would have to chalk up funds to preserve low-income housing, and the University of Pennsylvania, Drexel University, and Penn Medical would have to “contribute to an affordable housing fund.”

On March 14, Ibid filed a federal lawsuit against the city and Councilmember Jamie Gauthier after Council passed legislation temporarily barring developers from tearing down the Townhomes. 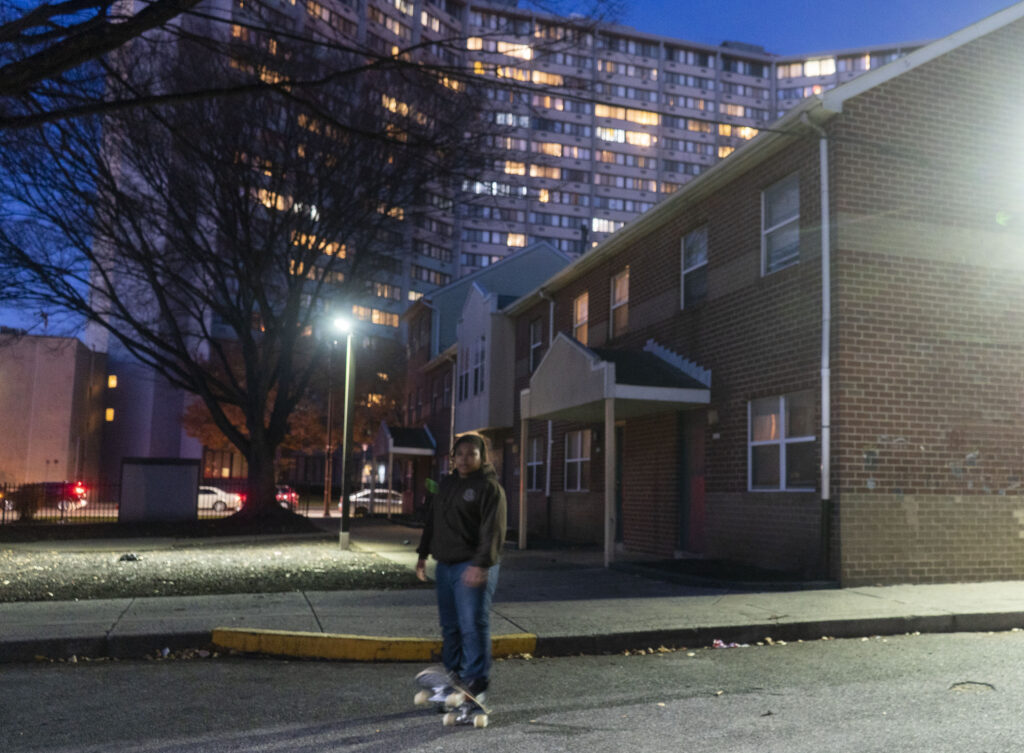 In a statement, Gauthier’s office said that the city lawmaker is “committed to obtaining an equitable housing outcome. I have been negotiating/working with IBID/Altman Brothers to obtain this. Through the litigation, we are committed to reaching a resolution that is beneficial for the residents and Philadelphia.”

According to the Hechinger Report, a nonprofit newsroom that covers issues of inequality and innovation in education, Penn, a nonprofit, does not pay property taxes, but has made a statement in 2020 that the University will donate “$10 million a year for 10 years to address environmental hazards in Philadelphia’s public schools.”

Back at the Townhomes, Alexander reminisced about how there was once a playground for the children, but that also had been removed.

“This whole area used to be just filled with kids. Laughing, playing…I’ve been saying this for the longest, first, they took our kids’ schools and made parking lots out of them and now you’re kicking them out of their houses,” she said.

As she walked further through the Townhomes she pointed out the doors and windows that were boarded up with the doorknobs removed, yet children’s chalk drawings adorned the brick exterior walls.

She said how one of the coalition members had taught the remaining children of the Townhomes how to set up and ride a skateboard over the summer. The community is still there despite a few residents moving out.

This was after the former mayor had testified that he “did not consider the racial effect of his community support” when it came to supporting or opposing the proposed Whitman Park Townhouse Project.

Rizzo said, “there is a possibility that it might affect the minorities, that they might be short-changed” before adding that the possible negative racial repercussions would not change his position to support the locals who did not want the project there.

These comments, along with others, led the city to lose a federal lawsuit filed against his administration for it’s racial discrimination when it came to housing.

The waitlist for the Philadelphia Housing Authority’s Housing Choice Voucher program, also known as Section 8 which is funded by HUD, is currently closed.

In an investigation done by NBC-10, more than 700 families were able to get into the PHA’s Housing Choice Voucher program through a loophole called “Portability” thus delaying the 2,100 people who were already on the city’s waitlist.

Portability “allows people to transfer their Housing Choice (Section 8) voucher from one public housing agency to another– anywhere in the country,” the investigation showed.

While HUD does allow those to move from their current city to a different one then back again to skip the long waitlist, this does, however, push those who had been on the waitlist further down the line.

Adding to the issue is if the original city chooses to take it in as one of its own as opposed to billing the city the voucher came from. NBC10 found that the PHA had “absorbed” 715 “port-in” vouchers of families that transferred back to Philadelphia between 2017 and 2021 and is currently paying “$10.4 million in rent annually” for those families.

One of the former residents who still works with the Townhomes council, Sheldon Davids said he and his family felt compelled to move because of the uncertainty as to when they would be forced to leave their home of over a decade.

“It was the speculation as to when the evictions would take effect with the first proposed date being July 9, and the uncertainty of the situation was such that my wife and I made the decision that despite the need for a presence to strengthen our campaign, our family’s security, a member of my family being my mother in law, required us to find a more stable and predictable circumstance,” Davids told the Capital-Star.

Davids came to the Townhomes from Jamaica in 2009, and said the neighborhood still feels “like home” because of the strong community there. He said that he felt the need to join in the fight to save the Townhomes because he is “invested in the idea of preserving what is among the final bastion” in the area.

“I’ve always said and will never stop saying the 3900 block sits on a major stop on a major line in a major city which for less-enfranchised persons is not a small thing. And that is one of the many reasons why we’re fighting to preserve this spot,.” he said.

Students have also been fierce advocates for the preservation of not only the townhomes but also Philadelphia’s Chinatown neighborhood, which faces a fight against the Philadelphia 76ers’ proposed new stadium.

This is not the first time Chinatown has been under pressure from developers. As reported by Billy Penn, Chinatown residents and supporters successfully fought off having a casino, a prison, and the Phillies ballpark there. 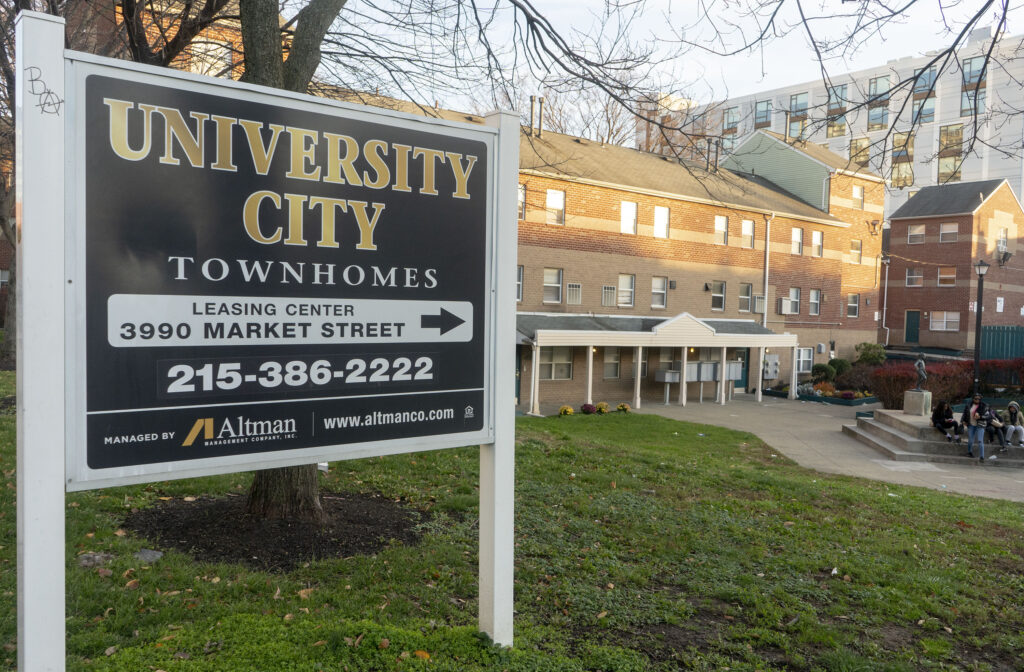 The area now called University City in Philadelphia, PA on 12/5/22 (Capital-Star photo by Daniella Heminghaus).On Nov. 30, despite the rain and the police presence, dozens of people gathered on the University of Pennsylvania campus in support of the student activists who were being targeted by the university as well as the residents of the University City Townhomes.

These student activists had been facing harassment from the University administration over their protests pertaining to the proposed acquisition of the University City Townhomes.

One Penn student, Andrés Gonzalez–Bonillas addressed the crowd saying, “[The universities] owe everything, and I mean everything, to this community. They owe everything to Black Bottom. They owe everything to the countless families displaced by their expansion. Why do they need the space? Why? They have all the money they could possibly want, why would they want more? These community members that have been displaced have seen prices skyrocket because of this university, with zero tangible or material benefit from this apparently prestigious university blocks away…We will not stand and watch as more people are displaced.”

He added that the university has placed him on disciplinary probation because of the work he has done to “call out Penn.”

He and another student were singled out after taking part in a protest with hundreds of others that crashed the UPenn Class of 2026 convocation this past August. He briefly spoke of this at the November gathering at Penn as well as in an interview with 34th St.

Alexander had also been in attendance at the November protest and had this to say, “All of this calling the cops, putting the kids on disciplinary action, you know, possibly sabotaging their futures for standing up for what y’all said was right … It’s horrible.”

Daniella Heminghaus is a free-lance journalist and photographer. Her work appears frequently in the Capital-Star.