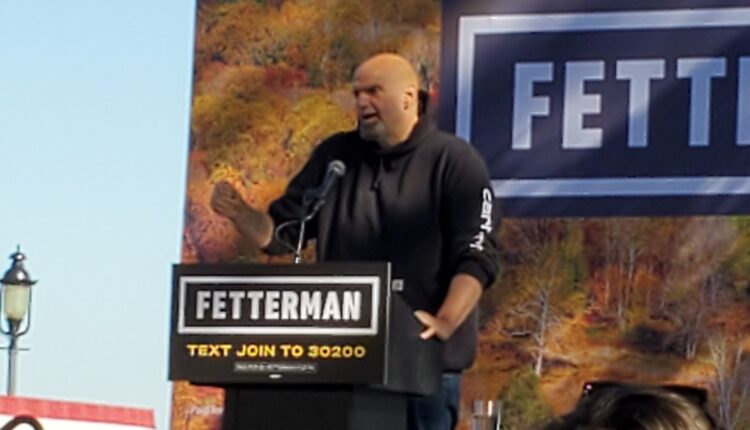 BRISTOL, Pa. — Along the banks of the Delaware River, Democratic U.S. Senate nominee John Fetterman rallied an estimated 1,230 supporters a little less than a month out from Election Day.

The setting worked for Fetterman, who began his 12-minute address with a shot at Republican opponent Mehmet Oz.

“I just realized when we pulled in, that over there, that’s New Jersey. The land of Oz.” Fetterman, Pennsylvania’s current lieutenant governor, declared, pointing to the Jersey coastline. “Dr. Oz, he thinks King of Prussia is European royalty.”

The candidate received a predictably warm reception from the crowd that packed Bristol Lions Park, home to the city’s wharf and adjacent to the 17th Century King George II Inn.

Fetterman slammed his opponent’s record of supporting questionable medicines on his TV show.

The battle for control of Congress: Abortion, inflation, crime and Biden

The Democratic nominee went on to defend his own record on crime before pivoting to Oz’s position on U.S. Sen. Lindsey Graham’s , R-S.C., proposed 15-week abortion ban. The loudest ovation, though, came when he invoked the Senate itself.

“Send me to D.C. and I’ll be that 51st vote,” Fetterman pledged. “Send me there to eliminate the filibuster [and] raise the minimum wage.”

Former Democratic U.S. Rep. Patrick Murphy, a Bristol resident, spoke briefly in support of the Democratic ticket, while also taking a shot at a passing boat blaring its horn.

“Nothing says privilege more than a protest on a boat, by the way,” Murphy quipped.

In a Saturday statement, Oz’s campaign criticized Fetterman for declining to take reporters’ questions after an event in York County.

“John Fetterman has made it clear that he is either afraid to answer important questions about his radical, out-of-touch record, or he’s not being transparent about his health,” Oz’s spokesperson, Brittany Yanick, said in the statement. “While Fetterman hides behind his computer screen, Dr. Oz is criss-crossing the state, taking questions from the press, listening to voters, and answering questions. Pennsylvania voters deserve to hear from both candidates.”

Fetterman concluded his rally with a call for supporters “to send [Oz] back over the river to New Jersey and send me to D.C.” That endeavor’s success may well depend on how Bucks County, and even how Bristol Borough, votes.

Fetterman’s success, like that of any Democratic candidate, depends a great deal on running up the margins in Philadelphia and its suburban counties.

That made Bristol a particularly apt campaign stop for Fetterman as it sits in blue-collar Lower Bucks. Running alongside Northeast and South Philadelphia and Lower Delaware County, they comprise an increasingly Republican working-class area amidst a region trending more Democratic and middle class.

The picturesque setting along the river has been used for campaign events before. For instance, just 48 hours before the 2014 primary, then-candidate Tom Wolf held a considerably smaller rally in this same park.

Accompanying and introducing Wolf that day was then-Montgomery County Commissioner Josh Shapiro, now the Democratic nominee for governor, who is looking to succeed the term-limited Wolf, who will leave office in January.

The State of the Race

Throughout the summer, Fetterman had momentum on his side. Even while the candidate was forced off the campaign trail after his stroke, Oz controversially failed to take advantage, vacationing in Ireland instead of hitting the stump. As a result, Fetterman’s lead rose to double-digits, while Oz was the butt of jokes on social media..

Late in the race, however, the contest has tightened, with the national Republican Party deciding to double down on Oz. U.S. Senate Minority Leader Mitch McConnell’s, R-Ky., super PAC spent millions of dollars on ads which used Fetterman’s tenure on the state’s Board of Pardons to brand him as soft on crime.

Over the course of a few weeks, a lead that stood at 12.0 percent in the FiveThirtyEight polling average in mid-August, fell to just 5.8 percent by the end of September.

Fetterman and Oz both have agreed to a debate set for Oct. 25 in Harrisburg. That debate will be televised throughout the commonwealth.

Why Disney is like a secular religion for some superfans