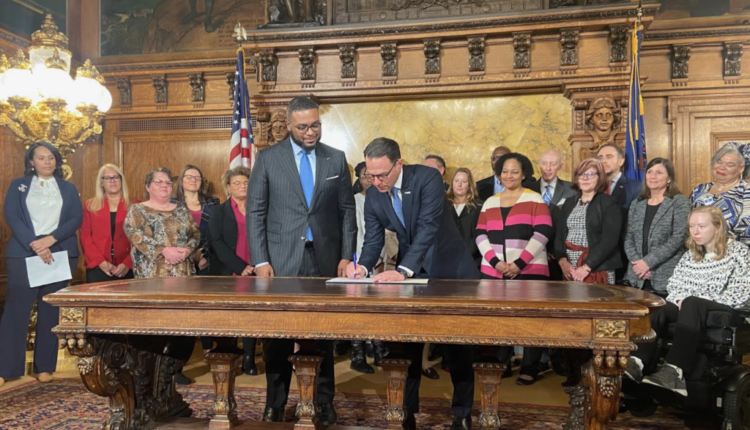 On his first full day in office, Gov. Josh Shapiro, a Democrat, signed his first executive order, removing a four-year degree requirement for tens of thousands of state government jobs.

Shapiro — who took the oath of office on Tuesday with Lt. Gov. Austin Davis — said the order applies to 92% of commonwealth jobs, estimating that roughly 65,000 positions in the state will be open to Pennsylvanians regardless of whether they hold a college degree.

“In Pennsylvania, the people should decide what path is best for them, not have it decided by some arbitrary requirement or any arbitrary limitation,” Shapiro said during a public signing ceremony on Wednesday.

Along with the executive action, Shapiro ordered all executive branch agencies to emphasize skills and experience during the hiring process and launched a review of the remaining 8% of jobs that still require a four-year degree. The administration also opened a new website that lets applicants search and filter state government job openings based on degree requirements.

“Pennsylvania government should be a place where every single person has the opportunity to serve and to succeed,” Davis said. “This is a significant step in tearing down barriers for employment here in Pennsylvania.”

Beth Christian, acting deputy secretary of administration, and Darice Mayhew, director of administration for the governor’s office, spoke about how they advanced in their state government careers without a four-year degree.

As a teenager, Christian decided college wasn’t right for her, but she didn’t realize “how that stigma would follow me through my career.”

She started working for the state as a clerical employee, believing that taking on extra work would compensate for not having a college degree. Eventually, Christian met a mentor — after working her way through nine positions in state government — who reminded her that the “boots-on-the-ground experience was worth just as much as a degree, if not more.”

“And when the next opportunity presented itself, I said yes to the executive position I’m so honored to hold now,” she said.

Christian, who does not have a four-year degree, said the executive order tells current state employees and those looking to work in Pennsylvania: “We support you.”

Before Mayhew went back to school to earn her degree, a personal goal for her, she spent a decade in the workforce, an experience she said provided “a richer and more relevant experience.” She added that she didn’t necessarily have to go back to school to get ahead in her career, but she noted that some high-level positions required a four-year degree.

“By shifting the commonwealth’s focus to experience and training and moving away from the degree requirement where it makes sense to do so, it will level the playing field and provide more advancement opportunities for employees — currently and future,” Mayhew said.

Shapiro identified removing the four-year college degree requirement as a priority while on the campaign trail ahead of the November election. He told reporters on Wednesday that he’s received positive feedback from voters and lawmakers on the issue, noting that the executive order is within his authority as governor.