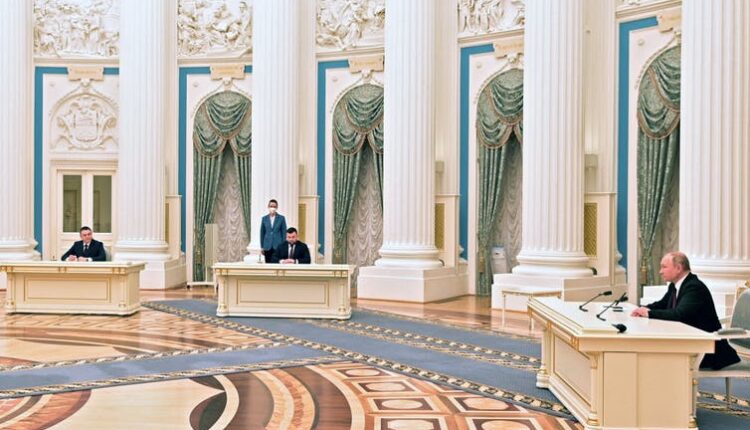 In a time of war, Republicans are giving aid and comfort to the enemy | Dick Polman

I’m old enough to remember when rabid rightist Republicans proclaimed “Better Dead Than Red” and insisted that anyone who was “soft” on Russia should leave this country and go live over there.

I never imagined, back when they paraded themselves as America’s true patriots, that they’d ever pull the ultimate switcheroo and morph from patriots to appeasers.

But hey, you live long enough and I suppose anything is possible. Now they’re scorning an American president in time of war, while sending love and kisses to a murderous Russian imperialist. As veteran political analyst Stuart Rothenberg sardonically noted on Twitter, “And you thought Republicans might rally around a sitting president during an international crisis, when the U.S. and our allied need to be unified. Not a chance.”

Bullies understand one language. The U.S., West must speak with one voice | Friday Morning Coffee

Of course not, because Vladimir Putin’s western branch manager – who sets the tone for the GOP – just won Employee of the Month for the umpteenth time. Trump praised Putin as “savvy” and “a genius,” in contrast to the president “who shouldn’t be there (and) has no concept of what he’s doing.”

When Trump watched Putin’s invasion of eastern Ukraine on TV, his reaction was: “This is genius. Putin declares a big portion of the Ukraine…as independent. Oh, that’s wonderful. I said, ‘How smart is that?’ And he’s going to go in and be a peacekeeper.”

A peacekeeper. It’s like the Kremlin is broadcasting propaganda to Trump via the fillings in his teeth. And his mouth dutifully keeps moving: “(Putin) liked me. I liked him…Got a lot of the great charm and a lot of pride. But the way he – and he loves his country, you know? He loves his country.”

‘These are human beings.’ How Pa.’s Ukrainian community is responding to Russian invasion

We’re also saddled with Mike Pompeo, a Republican presidential aspirant and the only former Secretary of State who’s out there calling Putin “savvy.” Just so you know, the Oxford English Dictionary defines savvy as “having common sense and good judgment.”

But in the Orwellian world of MAGA, “good judgment” is defined as flexing military muscle against a sovereign nation that’s trying to transition to democracy. MAGA Senator Josh Hawley, one of the pro-insurrectionists on Jan. 6, recently offered his definition of bad judgment: “global, multilateral cooperation, underwritten by American military might.” Putin couldn’t have said it better.

Alexander Vindman, former staff member of the National Security Council, singled out Hawley and other appeasers in a tweet the other day: “These people and a great deal of the GOP leadership will have blood on their hands. They’re fanning flames, encouraging Putin to attack Ukraine.”

Joe Walsh, a former Republican congressman, shakes his head in wonderment: “When I was a little by, both Republicans and Democrats believed that democracy was good and the Soviet Union was bad. Now I’m an old fart and Republicans believe Russia is good and democracy is bad.” I feel you, Joe. Back when I was a little boy in 1962, and a Democratic president had to confront the Russians during the Cuban Missile Crisis, the Republicans didn’t try to undercut their commander-in-chief.”

But times have changed. The official House Republican Twitter feed posted a photo of President Biden and messaged: “This is what weakness on the world stage looks like.” That tweet puzzled me. I was not under the impression that rallying the western alliance and slapping economic sanctions on the aggressor meets the dictionary definition of weakness.

It would nice to believe that the GOP’s MAGA wing will sink the party in the 2022 and 2024 elections. It would be nice to believe that most Americans will recoil at this perfidious – and potentially traitorous – behavior. But rest assured that Duh Base at this point will swallow whatever bilge it is offered.

And as for a broader swath of Americans, their concerns are frankly quite parochial: As long as a lot of Americans aren’t being killed faraway, a foreign crisis is at most a mere annoyance. And if that foreign crisis does trigger discomfort on the home front – like, in the present case, higher gas prices and more inflation (Biden warned that defending Ukraine’s freedom “will have costs for us as well”) – rest assured that people will take out their frustrations on him, further crashing his poll ratings in the run up to 2024.

The GOP appeasers want that. Putin wants that. It’s a new shared definition of savvy.

How an app is helping Pgh residents avoid dodgy infrastructure