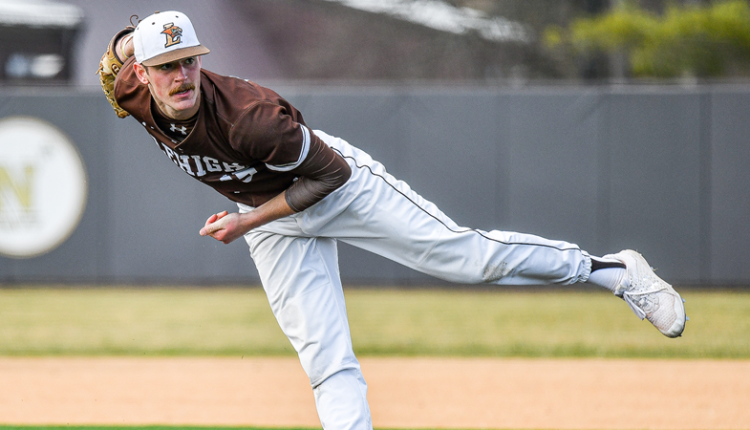 BETHLEHEM, Pa. – The Lehigh baseball team is approaching its most crucial weekend of the regular season to date, resuming hosting duties against Patriot League foes Navy and Bucknell in back-to-back doubleheaders Saturday and Sunday, respectively this weekend at J. David Walker Field. The Mountain Hawks (13-11, 1-3 PL) are currently on a season-worst four-game losing streak, falling in five of their last six games after winning six straight contests prior.

After dropping three of four against archrival Lafayette last weekend at Kamine Stadium, Lehigh will look to get back on track against traditional tough opponents Navy and Bucknell through the next four games. The Mountain Hawks are currently standing last in the Patriot League but will look to emerge back into the top four heading into the next week of action.

Lehigh’s last victory on Saturday against Lafayette in the series opener rode on the coattails of senior left-hander Luke Rettig’s masterful pitching performance. He recorded his second complete game shutout of the season after going seven strong, striking out eight Leopards and walking three with five hits allowed. Rettig has not allowed an earned run in 21 straight innings of work and has given up just one over 35.0 frames, equating to a nation’s best 0.26 ERA. Rettig also leads the Patriot League in a multitude of pitching categories including ERA, opposing batting average (.181), batters struck out (41), batters struck out looking (14), wins (5), runs allowed (3), earned runs allowed (1) and home runs allowed (0).

Though not as flashy as what Rettig has been doing as of late, the Mountain Hawks still have starting pitching that can get the job done in right-handers Carlos Torres (1-0, 9.19 ERA) and Ben Christian (2-1, 3.42 ) and left-hander Matt Stamford (1-3, 7.40). Rettig and Torres will likely get the starts against the Midshipmen on Saturday with Stamford and Christian going Sunday against the Bison. Christian was the standout arm of Sunday’s finale against the Leopards, shoving 7.1 strong innings of work, throwing five consecutive shutout frames before allowing the first run of the afternoon in the bottom of the sixth inning. He struck out four and walked one before getting pulled for Will Grisack in the eighth inning.

In the bullpen, the quartet of Ryan Deom (0-0, 4.32), Val Taddei (0-0, 1.93), Marcus Danchision (0-1, 15.75) and Timmy Kenney (0-0, 5.40) threw the final 4.2 innings against Rider Tuesday without giving up a run, despite the Mountain Hawks getting shut out, 3-0 in the quarterfinals of the Liberty Bell Classic. Taddei has been one of Lehigh’s most consistent relievers this season, surrendering just two runs in seven appearances, while fellow first-year Jack Hamilton (2-0, 2.53) has allowed three earned runs in 10.2 innings of work.

The offense has been quiet since belting 15 home runs in a 6-0 week with victories over Fairleigh Dickinson, Saint Peter’s and St Bonaventure. Lehigh hitters are batting a .196 clip over the last six games with just three home runs and 10 extra base hits in 184 at-bats. Mountain Hawk hitters are reaching base at a .295 clip over that period of time. The one constant force as of late at the plate has been sophomore Riley Davis, who is currently ranked second in the Patriot League in hitting with a .363 batting average, reaching base in 20 consecutive games. The recent absences of Jake Whitlinger and Rafe Perich in the lineup has taken a toll on offensive statistics in the last three games, slashing .293/.474/.390 with those two featured and .143/.214/.242 without them. Whitlinger, typically the lead-off man in the lineup has reached base at a .500 clip, ranking first in the Patriot League. Still, Justin Butler remains the Patriot League leader in home runs this season with seven, also placing first in slugging percentage (.718). Adam Retzbach is second in the league in RBIs (24), whole Whitlinger leads the way in runs scored (26) and Casey Rother is third in hits (31).

Like Lehigh, Navy has fallen in four straight contests dating back to Saturday after taking the first game of a doubleheader against Holy Cross before dropping the second game and both games of the doubleheader on Sunday vs. Army West Point. The Midshipmen were out-scored, 16-0 in Annapolis against the Black Knights before falling at UMBC Tuesday, 11-5.

The last time Lehigh took on Navy was in the semifinals of the Patriot League Tournament last season, where the Mountain Hawks took two out of three to advance to the Championship Series for the first time since 2015. The Mids hold an all-time series lead over Lehigh, 87-46. Lehigh won four out of six regular season contests between the two teams last year.

Bucknell, who was picked fifth in the Patriot League preseason poll, has undoubtedly been the surprise of the season so far, going 6-2 in Patriot League play to kick off the year following a doubleheader sweep of three-time defending league champ Army on Saturday and taking three of four over Navy to open league play the week before. The Bison most recently reeled off a mid-week win over Mount St. Mary’s, 11-9 in Lewisburg on Tuesday afternoon.

Anthony Sherwin has been the anchor of the Bucknell offense through 22 games, hitting .353 with nine doubles and a triple in 85 at-bats, driving in 13 runs. Preseason Patriot League Player of the Year Chris Cannizzaro is hitting .329 with two home runs and 13 RBIs, slugging .461 with an on-base percentage of .402. Brendan Lowery (.329) and Kyle Lyons (.323) are also hitting above .300 for the Bison so far.

Lehigh played Bucknell a record nine times in 2021 due to the regional schedule due to the COVID-19 pandemic and Lehigh went 5-4 in those games while the Bison took three of the final four meetings. Bucknell leads the all-time series, 106-91.

Both doubleheaders this weekend have first pitch times set for noon with a seven-inning Game 1 and nine-inning Game 2. Live stats will be provided on Lehighsports.com.