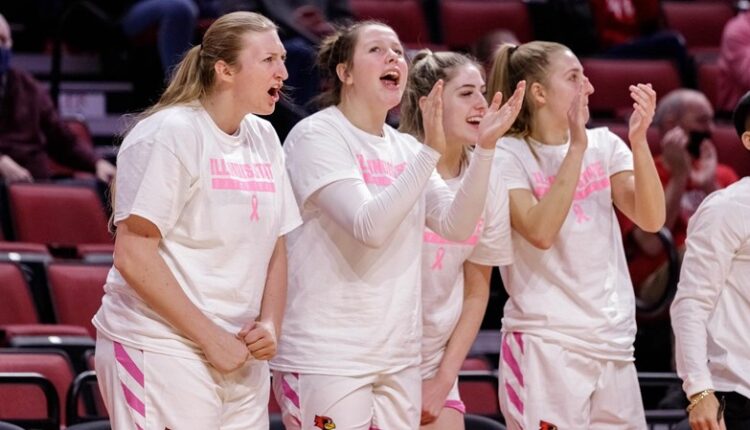 RALEIGH, NC – The Illinois State women’s basketball program was recognized as a 2022 Play4Kay National Award Winner, as announced by the Kay Yow Cancer Fund early Thursday morning. The Redbirds, who have been named a Play4Kay divisional winner the last seven years, are the first mid-major to sweep the Division I BCS and Non BCS national awards.

“Having played for Coach Yow and been a part of her staff in the final years of her life, I am so inspired by our community here at Illinois State and by all the winners,” said head coach Kristen Gillespie. “As Play4Kay becomes bigger each year, I know we are all a part of carrying out Coach Yow’s vision.”

Illinois State raised a program record $35,870 for the Kay Yow Fund at its annual Play4Kay game earlier this season on Feb. 6. The Redbirds have fundraised over $230,000 for the KYCF and the fight against all women’s cancers in their 12 years hosting a Play4Kay game.

“We are so grateful that our efforts match Coach Yow’s vision by uniting coaches and a community, advancing cancer research and lifting up survivors,” said Senior Deputy Director of Athletics/SWA Leanna Bmapper. “We have been successful in raising funds during our Play4Kay events in large part due to the support of our University and Athletics Department leadership, campus and community volunteers who serve as captains and are passionate about this fundraising cause and local sponsors who make our annual Play4Kay game a priority.”

The Fund will honor the following schools and communities for raising the most money in their respective divisions at the Wow4Yow appreciation event and the closing session of the Women’s Basketball Coaches Association’s national convention in Minneapolis, Minn. at the Final Four this weekend:

The Kay Yow Cancer Fund, Illinois State Athletics and the Carle Cancer Institute Normal announced in Feb. 2019 the launch of a fundraising campaign benefitting KYCF that can result in a $150,000 grant in support of a program that will serve the underserved in the Bloomington/Normal community. All money collected during this years’ event assist the efforts to reach the campaign’s goal.

The Kay Yow Cancer Fund was officially founded on Dec. 3, 2007, from the vision of the organization’s namesake, Kay Yow, former NC State head women’s basketball coach. Coach Yow was first diagnosed with breast cancer in 1987 before succumbing to the disease on Jan. 24, 2009. The Kay Yow Cancer Fund is a 501(c)(3) charitable organization committed to being a part of finding an answer in the fight against ALL cancers affecting women through raising money for scientific research, providing access to quality cancer healthcare for underserved women, and unifying people for a common cause. For more information on the Kay Yow Cancer Fund, or to donate, please visit KayYow.com.

Sisselberger and Leggett Recognized as Inside Lacrosse Midseason All-Americans

Popular Restaurant To Shutter After 91 Years In Allentown