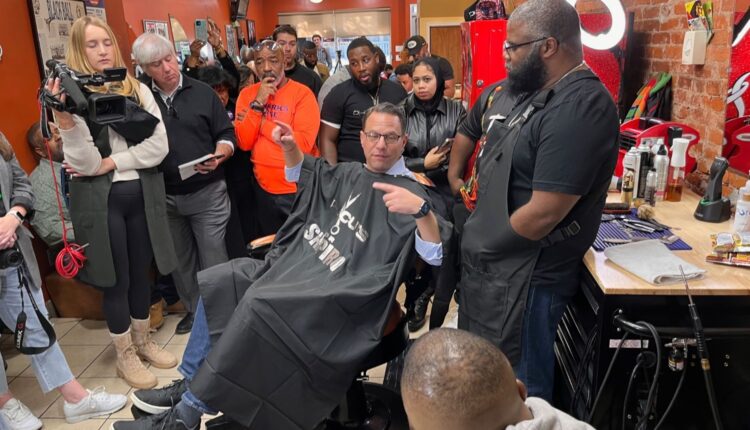 ‘I feel the weightiness of the moment’: Pa.’s Shapiro say as governor race enters its final days

It’s a Saturday morning, about two weeks out from Election Day. And Josh Shapiro is in the hot seat.

Pennsylvania’s Democratic gubernatorial nominee has found himself ushered into James Browne’s chair at Philly Cuts, a barbershop on Chestnut Street in West Philadelphia. If he wants to beat his Republican opponent, Doug Mastriano on Election Day on Nov. 8, he’s told, he’d better sit down.

“This is the key to victory,” the shop’s owner, Darryl Thomas tells Shapiro, pointing to the empty chair where Browne, clippers in hand, waits, as the crowd that’s packed this more than two-decade-old community gathering place laughs and cheers. “He says, ‘Darryl, you can get out there and politick and you can do everything. But if they don’t sit in my damn chair, they ain’t winning.’”

And because this is the kind of barbershop where, Thomas says, “news is news before it’s news,” Shapiro does as he’s told, and he sits down.

“Who knew?” Shapiro asks the crowd, as he crosses the room. “I thought you had to go out there, work your ass off, and run around the state. And all I gotta do is sit here?”

The line lands and the crowd claps. Then Shapiro goes in for the extra point.

“I don’t know what you can do with this,” he quips, pointing to the politician’s coif that’s been carefully combed into place.

For the next 20 or so minutes, as Browne works his clippers, Shapiro fields questions from a crowd that’s not shy about making its voice heard.

This West Philadelphia neighborhood has seen some of the worst of the gun violence that’s wracked Pennsylvania’s largest city this year. And they want answers.

John McLeod, who runs a program aimed at helping city kids, tells Shapiro he needs help cutting “through the red tape” so that he can reach the kids “before trouble finds them.”

Shapiro tells him that “schools have to be opportunity zones for our kids,” and says he wants to encourage vocational and technical education, as well as teach financial literacy and entrepreneurship, to provide students with opportunities.

He says he also wants to put “parents on the state Board of Education, do away with some of the standardized tests, and prepare kids for the future that they want.”

Later, out on the street, when the freshly shorn pol is asked about the pointed questions he faced inside the barbershop, he offers a practiced answer.

“I’m trying to talk to people here, what’s on their minds, and let them know what I can do to make their lives better as governor,”  Shapiro says. ” … I hear from people that worry about their kids’ mental health, about public safety, about their rights and freedoms being taken away from them.

“And that’s a result of having conversations with Pennsylvanians all across this Commonwealth every single day, showing up, doing a lot of listening, and not taking a single vote for granted,” he continues. “Here in Philly or anywhere.”

The 49-year-old, two-term attorney general had the field cleared for him in the May Democratic primary.

Now, the former Montgomery County commissioner and onetime Democratic state House lawmaker is running in a nationally watched contest against Mastriano. He’s a onetime U.S. Army colonel and election-denier who was at the U.S. Capitol during the Jan. 6, 2021 insurrection, was later subpoenaed by the House committee investigating the violence, and was once photographed, smiling, in Confederate grays.

Mastriano, who has cloaked himself in Christian nationalism, has threatened to make every voter in the state re-register to vote and decertify voting machines. More importantly, if elected, he gets to appoint his own secretary of state, giving him broad latitude to control elections.

Shapiro holds an average lead of 9 percentage points in the RealClear Polling average, which rates the race as a “toss up.” The nonpartisan Inside Elections says the race “leans Democratic,” further signaling its importance.

The stakes were raised even higher in June when the U.S. Supreme Court toppled Roe v. Wade, sending control over abortion back to the states. Some states have moved to swiftly ban the procedure. It remains legal in Pennsylvania.

Mastriano, an abortion foe who opposes any exceptions, has vowed to sign a six-week ban into law if one is sent to him by the state’s Republican-controlled General Assembly. And in 2019, he said that women who violated his proposed six-week ban should be charged with murder.

If elected, Shapiro will succeed Democratic Gov. Tom Wolf, a onetime Planned Parenthood volunteer who has vetoed a succession of Republican-authored efforts to restrict access to abortion.

But Wolf will leave office in January after serving the constitutional maximum of two, four-year terms. And Shapiro has vowed to be a similar bulwark against such legislation.

A few hours later, Shapiro is the headlining speaker at an abortion-rights rally his campaign has put together on the steps of Philadelphia City Hall. Democrats have mobilized their base, and won new supporters — especially in states where it has been banned, as Kaiser Health News reported earlier this month.

Unsurprisingly, the anger, the fear, and the energy of the crowd, mostly young medical students, is physically palpable. 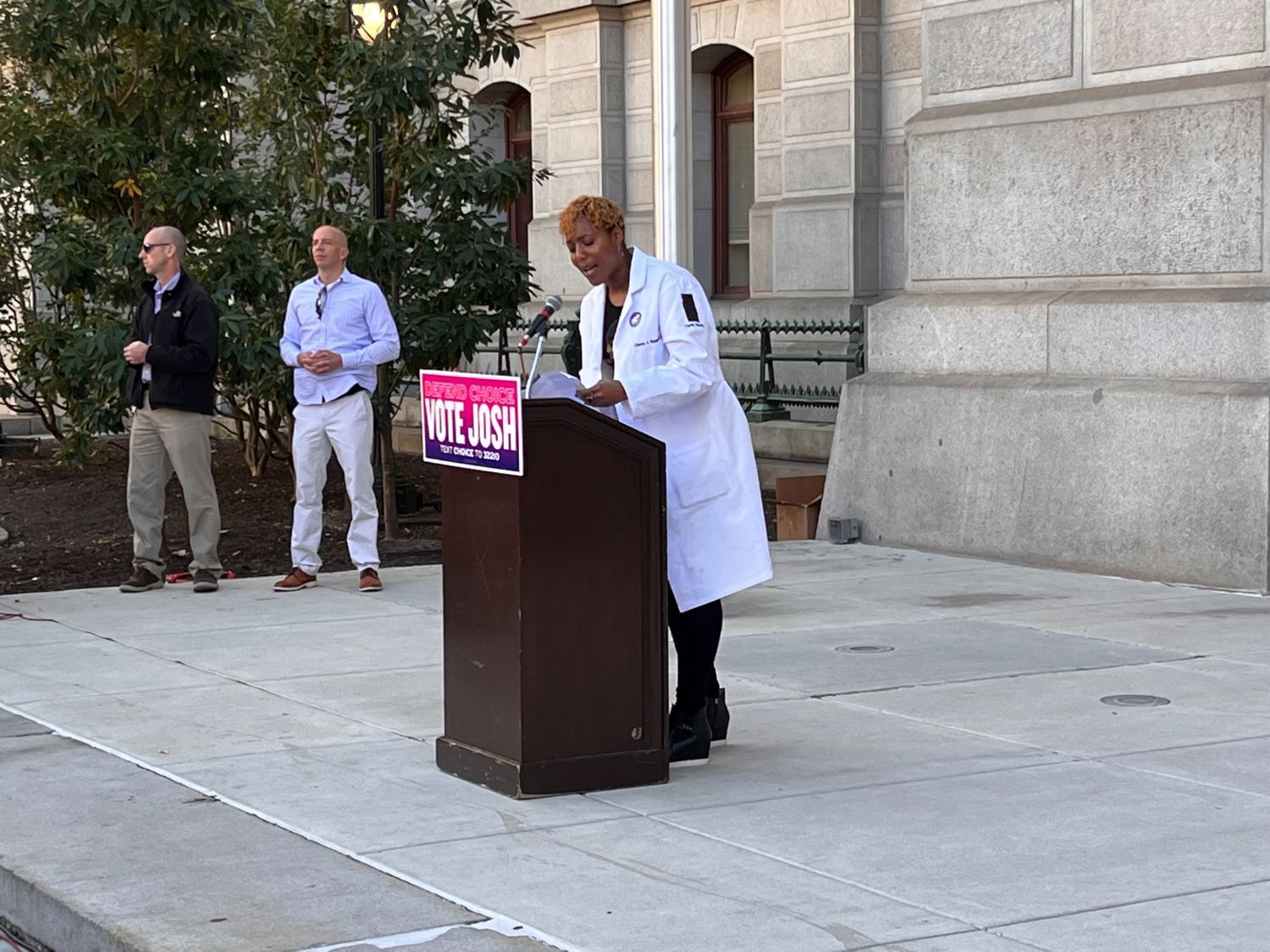 The future of abortion rights in Pennsylvania is “uncertain” after the high court’s ruling, Dr. Alhambra Frarey, an OB/GYN in Philadelphia, tells the crowd. “If we do not elect Josh Shapiro, the Pennsylvania Legislature is sure to pass a ban that will be signed into law in early 2023.”

Like other speakers on this October Saturday, Frarey says she’s angry at lawmakers who would presume to put themselves between often desperate and frequently Black and brown patients at a time when they need help the most.

“I trust my patients and … I trust they know best what they need to live in a healthy and affirmed way,” Frarey says.

A few minutes later, Dr. Chioma Ndubisi, offers a similar sentiment. She tells the crowd that she moved to Pennsylvania from neighboring New York, and was horrified to learn that Pennsylvania’s Abortion Control Act requires pregnant people to give “informed consent,” and mandates a 24-hour waiting period before someone can get an abortion.

“Your geography, your ZIP code should not decide whether you can access care,” Ndubisi says, adding later, “The courts will not save us. From voting rights to immigration and trans rights. This is the moment we are all in, and we must fight back.”

During his speech, Shapiro says the prospect of losing the right to an abortion is “no longer theoretical.”

Because of the U.S. Supreme Court, “rights have been stripped away,” and abortion clinics in Pittsburgh have seen an explosion in demand for their services, overwhelmingly from people who live in states where access to care has been restricted.

“Every state has a choice to make about whether they value freedom and trust women to make choices about their own bodies,” he says.

Afterwards, Shapiro poses for selfies, shakes hands and talks with the doctors and the aspiring ones. As he does, the enormity of the faith and trust being placed in him once again becomes clear.

For these young physicians and their mentors — nearly all of them women — Shapiro literally could be the last line of defense when it comes to protecting both their profession and access to abortion for thousands of people.

When he’s asked about that binary choice and its implications, Shapiro pauses a moment before he responds. The answer falls somewhere in that broad space between the authentic and the soundbite.

“I feel the weightiness of the moment on this issue, [and] on many other issues related to our freedoms and our rights,” he says. “It’s not lost on me. But it doesn’t weigh me down either.

“If anything,” he continues. “It gives me more motivation, not just to defeat Doug Mastriano, but to be able to deliver for them — and for people all across Pennsylvania — whether it’s on the issue of reproductive freedom, public safety, education, growing the economy, whatever the case may be, so I feel it.

“And I feel it not just here in Philly, I was stopped by an elderly woman in Lawrence County the other day on the opposite corner of our commonwealth, who talked to me about living through life before Roe and said she never wanted to go back there,” he concludes. “So it’s conversations like that along the trail, that fuel me and motivate me and I’m certainly aware of the weightiness of the moment.”

Pennsylvania voters will make the final call on whether Shapiro is worthy of the moment on Election Day, Nov. 8.