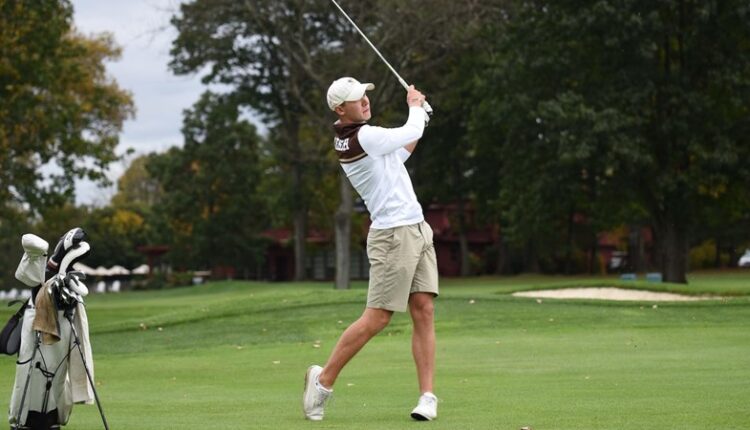 Hurly Tabbed As Patriot League Golfer of the Week

BETHLEHEM, Pa. – Lehigh junior David Hurly has been named the Patriot League Men’s Golfer of the Week, the league announced Wednesday. Hurly was the Mountain Hawks’ top finisher at the two-day Wildcat Invitational, where he tied for fifth place at 144 (67-77).

Hurly rode a hot start to an opening round three under par 67 Monday at Radnor Valley Country Club in Villanova, Pa. He carded three birdies in his first nine holes and four overall to take the 18-hole individual lead. Hurly made two birdies in his final round Tuesday to finish sixth, and was the top finisher among players from the four participating Patriot League schools (Bucknell, Colgate, Lafayette, Lehigh).

The opening round 67 was the second lowest score of Hurly’s college career. He shot 66 at last year’s ABARTA Collegiate Invitational and matched that number last September at The Doc Gimmler.

The sixth place finish was the second straight top-six finish for Hurly, who tied for fifth at last week’s ABARTA Collegiate Invitational. Hurly’s 74.15 scoring average is tops on the Mountain Hawks this season. He has led Lehigh in three of nine tournaments, including its last two.

The Mountain Hawks will face Lafayette Thursday in the annual President’s Cup matches at Hamilton Farm Golf Club in Gladstone, NJ Lehigh will then shift focus to the Patriot League Championship, April 29-May 1 at the Steel Club in Hellertown, Pa.