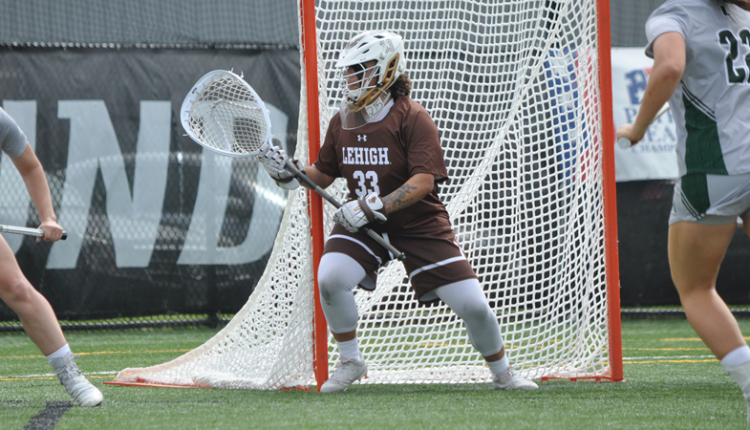 BETHLEHEM Pa. – Lehigh women’s lacrosse sophomore Hayley Hunt was named an honorable mention All-American by USA Lacrosse Magazine Tuesday afternoon, following an impressive first season at Lehigh. Hunt currently leads the nation with 216 saves, 17 more than anyone else (as of Wednesday, May 11). Hunt is also second in save percentage (54.3) and saves per game (12.50). This marks the second straight season the Mountain Hawks have had an All-American (by any outlet), following Sondra Dickey in 2021 (who was named to the third team by the IWLCA, among several honors).

A second team All-League honoree, Hunt’s 216 saves stood seventh in program history and most since Christina Dolan had 230 in 2000. Her 54.3 save percentage is the highest by a Patriot League goalkeeper since Megan Orr in 2007 (excluding the 2020 pandemic-shortened season). Hunt was named Patriot League Goalkeeper of the Week and IWLCA Co-Defensive Player of the Week following a combined 29 saves and just 10 goals allowed vs. Lafayette and Holy Cross. Included was a career-high 18 stops (just four goals allowed) vs. Holy Cross. Hunt recorded double-digit saves in all but three games this season.

The 2022 season ended with the Mountain Hawks in the Patriot League Tournament for an eighth straight season, reaching the semifinals for the fifth time in the last six tournaments.

Why Won’t More Older Americans Get Their Covid Booster?