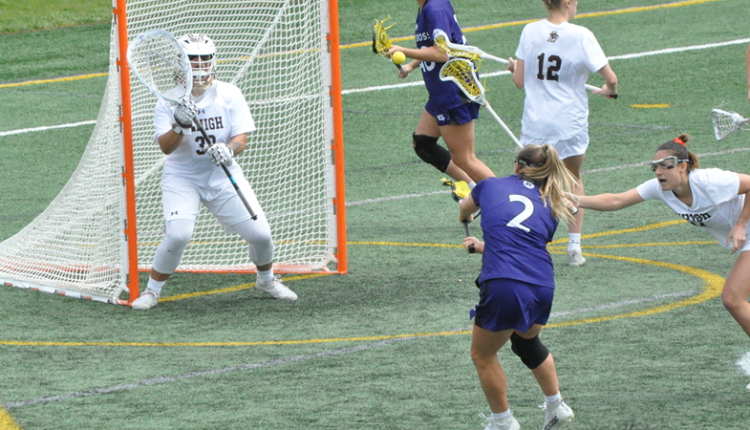 Hunt began with 11 saves, allowing just six goals against Lafayette. She stopped four-of-five in the first quarter to help the Mountain Hawks open a 4-1 lead after a quarter. She was even better against Holy Cross Saturday, making a career-high 19 saves (most by a Lehigh goalkeeper since February of 2019) while allowing just four goals. The 19 stops are tied for the 10th most saves in NCAA Division I women’s lacrosse this season. It’s also by far the fewest goals allowed among anyone with 19+ saves in a game this season.

Against Holy Cross, Hunt stopped 7-of-8 sent her way in the first quarter then all six in the fourth. For the week, she and the Mountain Hawks’ D allowed just 10 goals. Holy Cross’ four goals were a low season and fewest in any game since Apr. 26, 2019 against Loyola. The defense allowed just one goal over the game’s final 32 minutes against Lafayette Wednesday. Against Holy Cross Saturday, Lehigh held the Crusaders scoreless for a stretch of 25:09 in the first half then again for the game’s final 15:01.

Senior Claire Keller and junior Katia Carnevale were also recognized as an honorable mention on the weekly honor roll. Against Holy Cross, Keller posted a groundball and career-high three caused turnovers, but most impressively, shut-out Holy Cross leading scorer Jolie Creo – who was sixth nationally in points per game coming in. Keller held her without a point in a Patriot League game for the first time in the senior Creo’s career. Meanwhile, Carnevale scored 12 combined goals for the week, including an eight-goal effort in Wednesday’s 16-6 win over Lafayette.

Following Monday’s game, the Mountain Hawks head to Colgate for the regular season finale on Thursday. Opening draw is set for 4 pm on ESPN+.