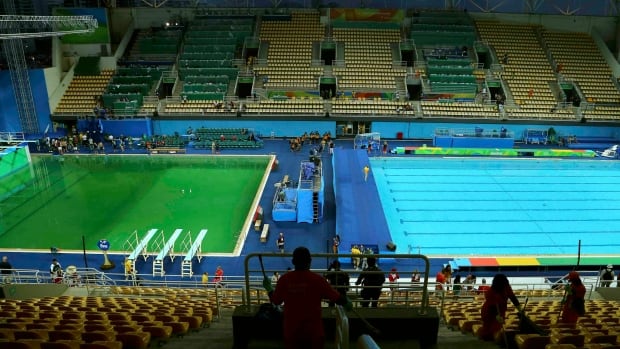 How to make an Olympic swimming pool go green

The Olympic diving pool turned an eye-catching green color on Tuesday, and the men’s water polo pool next door started taking on a green tinge too, the following day.

The international governing body for aquatics known as FINA said Wednesday that some of the water tanks at the Games simply ran out of a water treatment chemical, causing pH levels outside the normal range.

Rio Olympics spokesman Mario Andrada at a press conference Wednesday blamed a “decrease in alkalinity” for the color change, but insisted the conditions were safe for competitors and spectators, and the color was expected to be “back to blue shortly.”

But what chemical could they have run out of? And how did it make the water green?

The most common cause of green water in pools is algae, said Carl Salter, a professor of chemistry at Moravian College in Bethlehem, Penn., who has co-authored a paper on the chemistry of swimming pool maintenance.

“Normally, you chlorinate a swimming pool to prevent this from happening,” he said. “A swimming pool is meant to be in an unnatural environment. You don’t want biological systems to take hold.”

Those biological systems include not just algae, but bacteria and viruses that could potentially make swimmers, divers and water polo players sick.

So where does pH come in?

“If pH isn’t right, the chlorine protection isn’t as effective,” Salter said. That can allow algae to gain a foothold, especially in outdoor pools like the one in Rio.

Michael Lowry, an instructor at the Lowry School of Pool and Spa Chemistry, based in Newmarket, Ont., said chlorine is most effective at a pH of 5, but that’s too acidic for human skin, eyes and bathing suits, so pools are usually kept at a pH of between 7.2 to 7.8.

When chlorine is added to water, it essentially forms bleach, which is alkaline — that is, it has a high pH.

Generally, pools will add hydrochloric acid, also known as muriatic acid, to lower the pH back down to the ideal level. The equipment in the pool will usually do that automatically—unless the chemical runs out, Lowry said.

So there are two chemicals that they could have run out of that would affect pH: chlorine and hydrochloric acid.

Roberta Dyck, a lecturer and PhD candidate in civil engineering and toxicology at the University of British Columbia’s Okanagan campus who does research on swimming pool chemistry, said she’d be surprised if the Olympics ran out of chlorine (even though that could cause a ” decrease in alkalinity” as Olympic officials indicated was the problem.)

She noted that Olympic officials have been declaring the pool “perfectly safe.”

“If they weren’t maintaining adequate disinfection levels … they wouldn’t necessarily be able to say that,” she said, adding it’s more likely they ran out of a chemical used to balance the pH.

Pee probably not the problem

Apart from algae growing due to an unbalanced pH, which all three experts thought was the most likely explanation, there are a few other possible causes for the color change.

One is that there are dissolved chemicals in the water used to fill the pool, such as copper, that can crash out as an insoluble precipitation or powder when the pH is high. 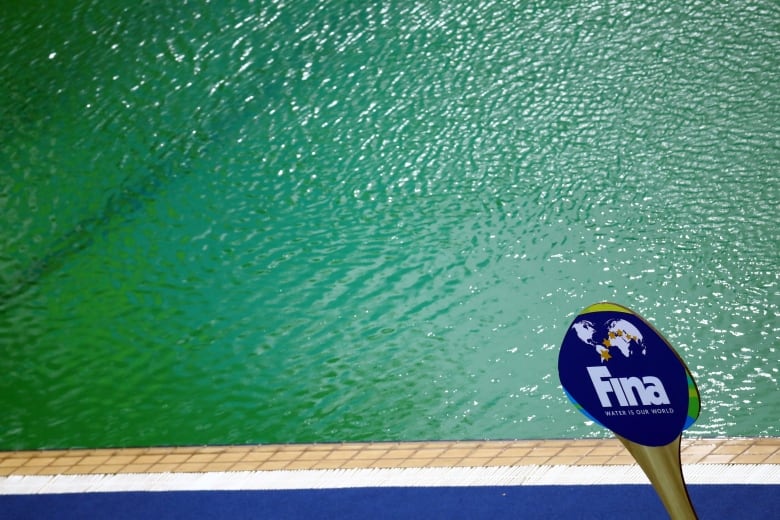 The international governing body for aquatics known as FINA said Wednesday that some of the water tanks at the Games simply ran out of a water treatment chemical, causing pH levels outside the normal range. (Kai Pfaffenbach/Reuters)

Lowry said he’s seen that happen in pools before, but it normally takes some time for enough copper to accumulate from sources like water pipes. In those cases, it will also typically turn blond-haired swimmers’ hair green — something he hasn’t seen at the Olympics.

Dyck said it’s also possible for water to be discolored by chloramines — chemicals produced when chlorine reacts with urine or sweat. But she doubts that’s the problem in this case, as that’s typically more of a problem in indoor pools. She added that Olympic swimmers and divers haven’t complained about the water burning their eyes and skin — a common effect of chloramines.