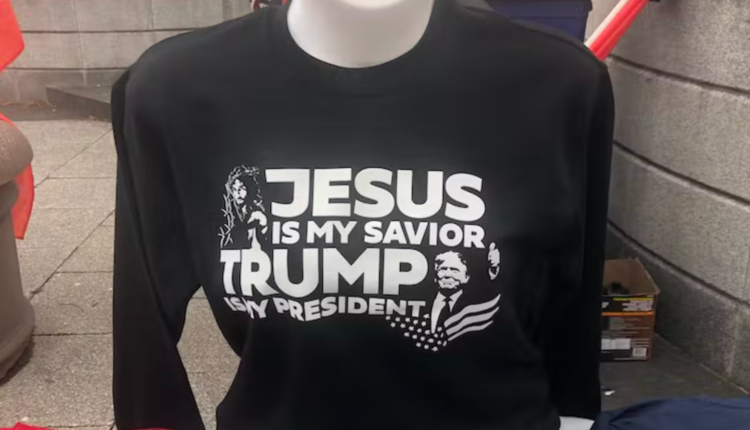 By Joyce Dalsheim and Gregory Starrett

When they entered the Senate chamber on Jan. 6, 2021, a group of insurgents stopped and bowed their heads in prayer to consecrate the building and their cause to Jesus. When the Senate reconvened later, its chaplain, retired Navy Adm. Barry Black, also prayed, but called the insurgents’ actions a “desecration of the United States Capitol building.”

Both sides appealed to the Christian God as the authority for their actions and values.

Outside, at the rally that preceded the attack on the Capitol, there was a similar focus on God, in the form of Christian nationalism, which frames the U.S. as a Christian country whose politics and institutions should be guided by Christian principles.

As cultural anthropologists who study politics and religion, we attended the Jan. 6 rally, which some called “Save America” and others called “Stop the Steal,” because we were interested in observing the symbols on display and in talking with the people there. Having studied political demonstrations before, we wanted to document this event and what it meant for its participants.

Most of the people we encountered were peacefully expressing their own political views and were not part of the insurrection. But they nevertheless expressed longstanding ideas that were ultimately echoed and amplified in their most extreme form by those who did engage in violence at the Capitol.

Maintaining social order and a functioning democracy requires holding people responsible for their actions. That’s why much of the public focus on the insurrection has – rightly – been on the violence and the political conspiracy behind it, through which then-President Donald Trump and his allies sought to overturn the 2020 presidential election.

But as the congressional hearings on the insurrection resume, they will most likely focus on the violent minority and the conspiracy of which they may have been a part. The committee’s goal is not to understand the tens of thousands of people who attended the rally to express their collective identity and their solidarity with what they saw as a just cause: maintaining America’s political and religious heritage. The focus will be on Trump as Jesus fades into background.

Research on the events of that day reveals that most of the attendees at the rally – even those who were later arrested for their actions – were ordinary Americans, people committed to what they believed were the true results of the election. Most of them were not members of organized groups such as the Proud Boys, the Oath Keepers or the Three Percenters.

What we observed at the rally was an optimistic occasion where the people gathered expressed pride in their collective identity. The atmosphere was celebratory, even carnivalesque, perhaps like a tailgate party preceding an American football game. When we arrived we were greeted by a woman who called out, “Welcome to the party!”

The people we saw there were expressing their concern for American democracy and the ideals of law and order. We saw them answering the call of a president and seeking to protect the integrity of the American political system. Most strikingly, we saw proud Americans standing up for Christian values. 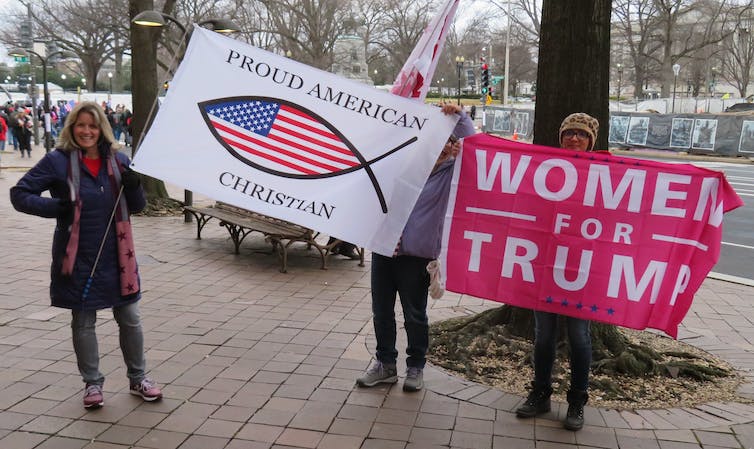 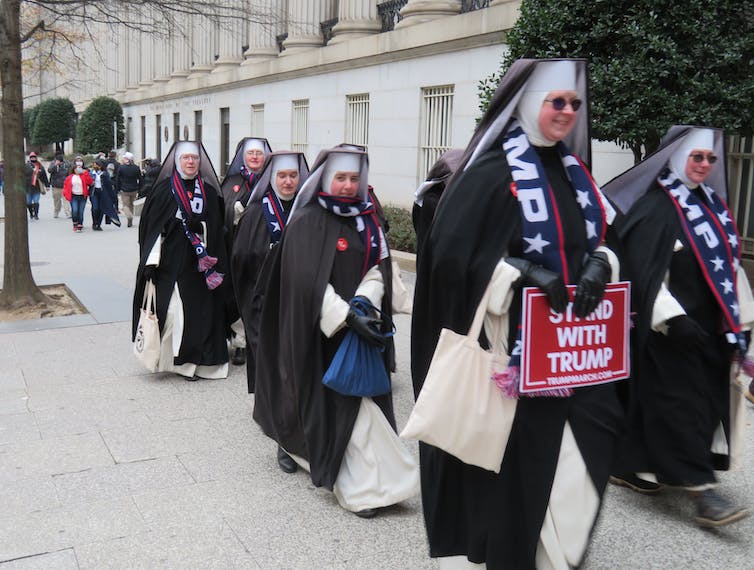 Anthropologists have long known that public displays are a common way of crafting identities. In the U.S. this is evident in ethnic and holiday parades, museum exhibits, popular demonstrations and highly orchestrated conferences.

On Jan. 6, the images and slogans deployed by the crowd included a wide variety of American flags and recycled Trump 2020 campaign gear, as well as pointed insults toward his opponents. Gun rights were a major theme; flags with images of assault rifles read “Come and Take Them!” Other signs focused on individual freedom by refusing COVID-19 restrictions. American flags with a central blue stripe indicated support for law enforcement.

Christian symbols were pervasive throughout the rally. People took pride in Christian identity and often conflated Jesus and President Trump as figures of national salvation, “Chosen Ones.”

There were flags and T-shirts proclaiming, “Jesus is my Savior and Trump is my President”; posters showing a white, blond, blue-eyed Jesus wearing the Trumpian MAGA hat; and a wide variety of other flags and banners bearing Christian themes.

Some of the Christian displays were starkly militant, such as a flag depicting a raging fire with both a bald eagle and a lion roaring – symbolizing both the United States and a militant Christ. Significantly, such militant themes in broader Christian culture are not restricted to evangelical Protestants, who are often perceived as primary drivers of religious participation in U.S. politics. 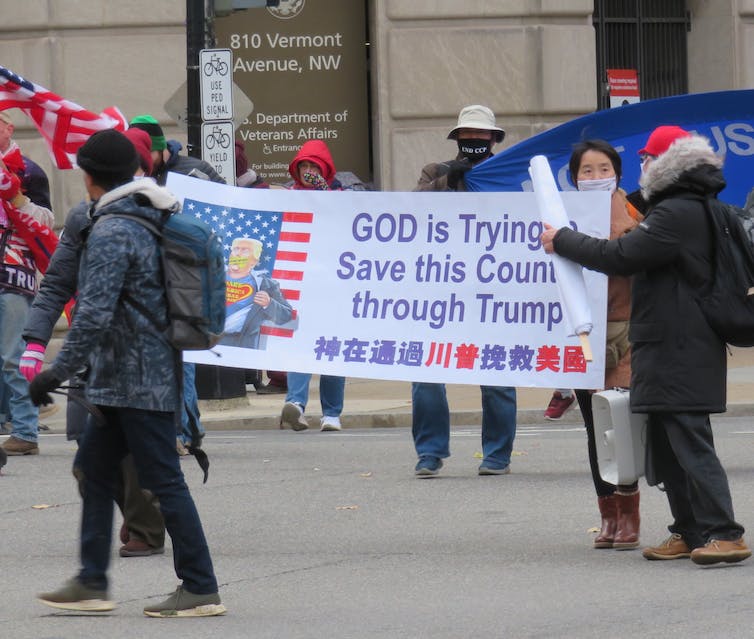 Despite their professed devotion to God and nation, from the very beginning the Capitol insurrectionists and those at the earlier rallies on Jan. 6 were labeled “extremists.” That term suggests a moral flaw causing people to act in unacceptable ways, such as attacking members of the Capitol police or calling for the vice president to be hanged.

But “extremism” can also be understood as a more intense or committed version of what is otherwise ordinary. As scholars of the cultural politics of religion, we suggest this ordinariness is actually more alarming than its extreme expressions, because it’s harder to notice. Political theorist Hannah Arendt called this “the banality of evil.” Arendt and her generation of scholars were concerned about how totalitarianism could emerge from the very principles we think make us free.

People don’t need to break windows or bones to erode human rights, endanger democracy or form a basis for authoritarianism. Instead, they can ignore what had been expected social behavior because they find a personal or political advantage or formulate or assent to unjust laws. In Arendt’s view, these people are avoiding the human responsibility “to think” from others’ perspectives and to interrogate commonly held ideas.

It was precisely the ordinariness of most of the rallygoers that day that caught our attention. We met people who were real estate agents, firemen and retired construction workers, as well as grandmothers with their children and grandchildren. They seemed familiar to us, as though they could be our Christian neighbors.

People arrived in Washington in carpools or buses with friends or family members. They wanted to take personal responsibility for the political health of the republic and the country’s Christian European heritage and freedoms. They came to uphold the country’s founding myth that injustice can be met by the popular unity of mass rebellion. As one handmade sign read, “Let’s 1776 this place.”

They were relentlessly deceived by their leaders through media owned by wealthy corporations that reaped huge profits from those lies. But that does not change their motivations. Instead it raises questions about the manipulation of democratic and Christian values and highlights the problem of whether people can think for themselves in the face of such an overwhelming barrage of lies.