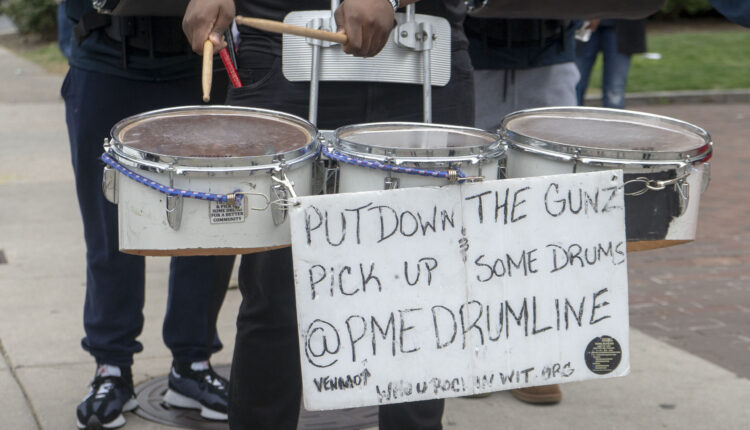 The march together against gun violence which started at 34th and Walnut and ended at the Wharton School’s John Huntsman Hall steps in Philadelphia, PA on 4/26/22.
[DANIELLA HEMINGHAUS]

PHILADELPHIA —  With a couple dozen supporters, members from the West Philadelphia High School drumline, and members from Positive Mental Energy drumline, Khalif Mujahid-Ali, founder of the Beloved Care Project, a community-based group trying to help Philadelphia’s youth by tackling the root causes of pain and trauma, marched around the campuses of Drexel and University of Pennsylvania to protest the city’s rising tide of gun violence.

Khalif Mujahid-Ali, the founder of the Beloved Care Project, marching against gun violence. The march started at 34th and Walnut and ended at the Wharton School’s John Huntsman Hall steps in Philadelphia, Pa., on Tuesday 4/26/22. (Photo by Daniella Heminghaus for the Capital-Star)

When he was asked why Tuesday’s march through those campuses Mujahid-Ali said it was “because every college in Philadelphia is in the middle of the hood, technically. Within an eight block radius from the ‘hood are our colleges.

“Everyone is in danger in Philadelphia through gun violence,” he continued. “Our students are too. So now it’s about bringing awareness to those who either don’t want to be aware, are not aware, who don’t care, who don’t feel like they could be bothered, or think about it. My goal is to bring awareness because I care about everybody in the city of Philadelphia.”

According to reports by both the Philadelphia Inquirer and WPVI-6, the city is already outpacing last year’s number of homicides. It surpassed 100 killings by March of this year and city officials are saying the numbers are following “a trend of about 1.5 homicides a day.”

Recently, a 21-year-old was shot multiple times near the Temple University train station stop. Last December two people were shot waiting at a traffic light in University City,  Last November a Temple University student was killed, and last August another person was shot outside the  7-11 on Drexel’s campus.

In March, violent crimes near Temple University even prompted a group of parents to hire a private security firm to protect their kids. Some of the ways that Temple University responded to this included offering landlords up to $2,500 grants to add lighting and security cameras to their properties and the university’s Campus Safety Services are on the path to increasing their forces by fifty percent by the end of this year.

He added “this year we’re walking through University of Pennsylvania because those are our number one supporters. And, all the sudden, lately Drexel has been coming on board with us. And my goal is knowing that those two schools are together to walk a path for the students, for the faculty, for support against this gun violence. So this is why I did this march like this.” 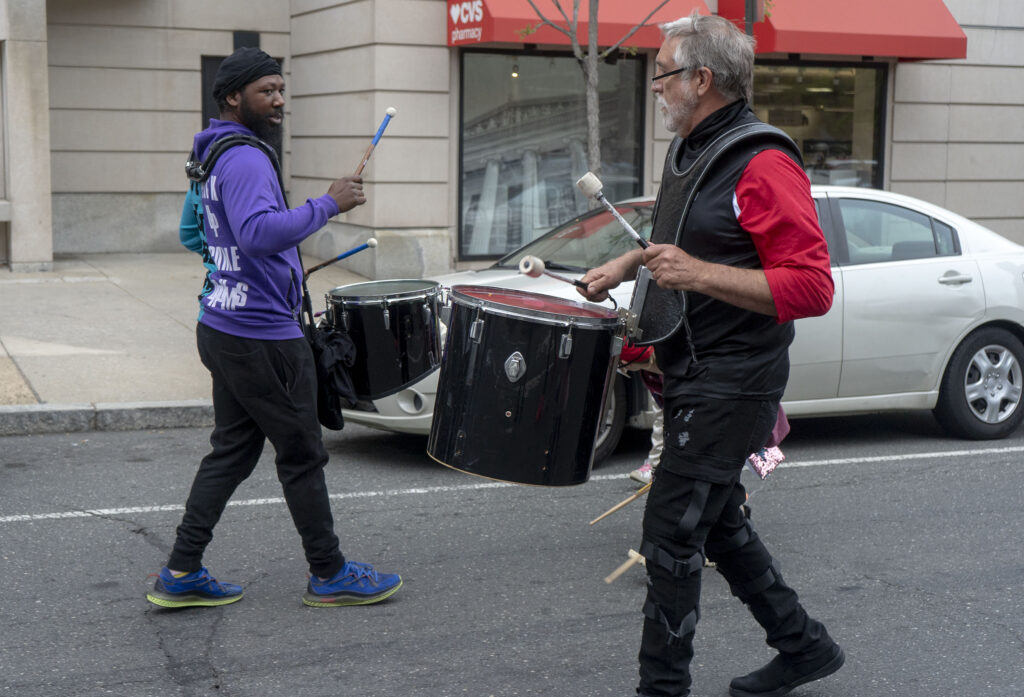 Tony Royster, director and founder of Positive Movement Entertainment Drumline, on left, and Nelson Haakenson drumming during the march together against gun violence (Photo by Daniella Heminghaus for the Capital-Star).
[DANIELLA HEMINGHAUS]The march started at the intersection of 34th and Walnut Streets cutting through the University of Pennsylvania and Drexel campuses before ending at the Wharton School’s Jon M. Huntsman Hall steps. Along the way, marchers asked others to join them and eventually two college-aged looking people did.

Towards the end of the march, there was a performance by members of the Positive Movement Entertainment Drumline, led by founder and director Tony Royster.

He added “I was raised in the projects … the drill team basically inspired me and kept me out of trouble.” In 2013 when he lost a close friend, who had also been a drummer, to gun violence the drumline started promoting “put down the guns and pick up some drums.”

When he was asked about how many people he thought the drumline got off the streets he said “so in the whole, [I’d] say eight to ten years that we’ve been together, we had over one hundred kids. Like, 2014 we definitely had over fifty and out of those, we [were] able to get three young adults and adults to get off the streets, put their guns down …”

Another contributing factor to the issues in Philadelphia that the marchers brought up was gentrification.

Mujahid-Ali said gentrification has become “the number one problem in Philadelphia” because “they gentrified before they took care of the crime. So when they gentrified they opened up the doors for all the people moving into Pennsylvania and Philadelphia to be the next victims of gun violence.” 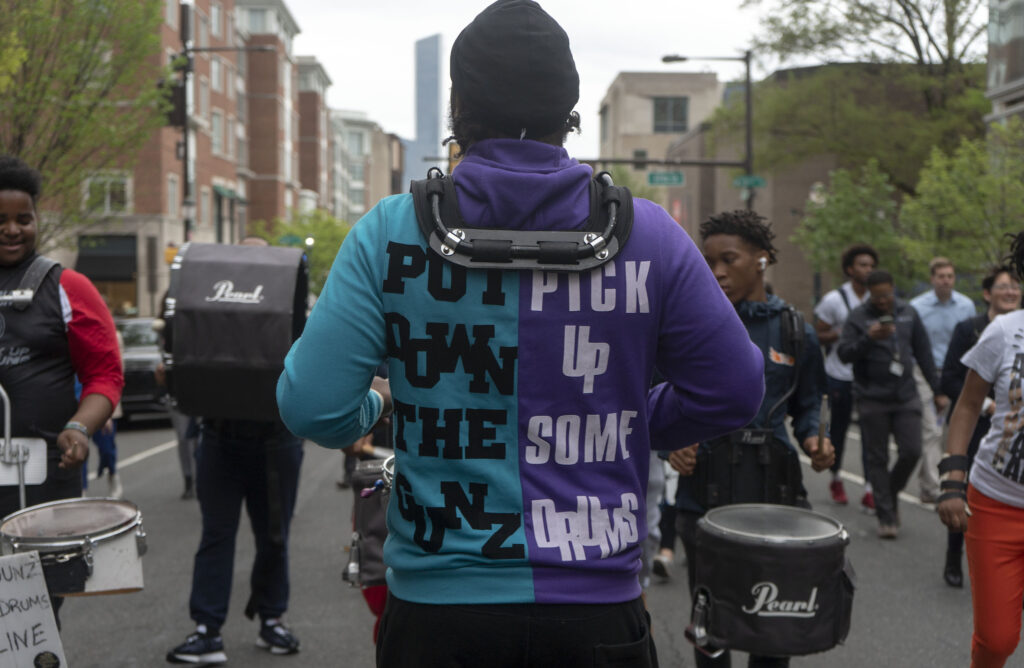 (Photo by Daniella Heminghaus, for the Capital-Star)

In the most recent Pew poll, more than 60 percent of white Philadelphians feel “completely or pretty safe in their neighborhoods at night.”

Philadelphia City Controller Rebecca Rhynhart’s office maintains an interactive map on its website showing the city’s 133 fatal and 532 non-fatal shootings with the majority being in the northern and western neighborhoods.

Mujahid-Ali stressed that he and the group do not want to simply “put a band aid” on the issue but to “get to the cause.” 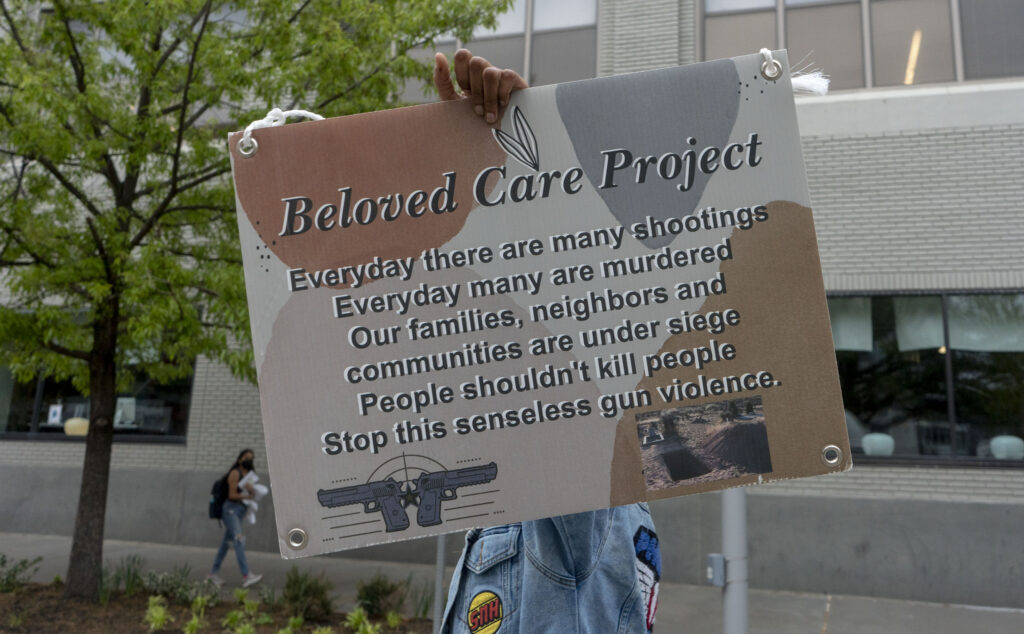 (Photo by Daniella Heminghaus, for the Capital-Star).

The Beloved Care Project came to be for a number of reasons but one reason is the personal loss Mujahid-Ali faced. He lost 10 people in his family due to gun violence.

The Beloved Care Project motto is “it takes a village to raise a child, so that the child can grow up and raise a village. Let’s start raising villages again.” The project does healing sessions, table talks, and “listen to the children” events among other team building and awareness events as a way to reach out to those in need.

Before the marchers dispersed, Mujahid-Ali added one parting note that gun violence can affect anybody, regardless of race, religion, sexual orientation. “These gun shooters don’t have a problem putting nobody down…this [anti-gun violence initiative], we need support from all people. No matter your age, your race, your religion. We need support.”