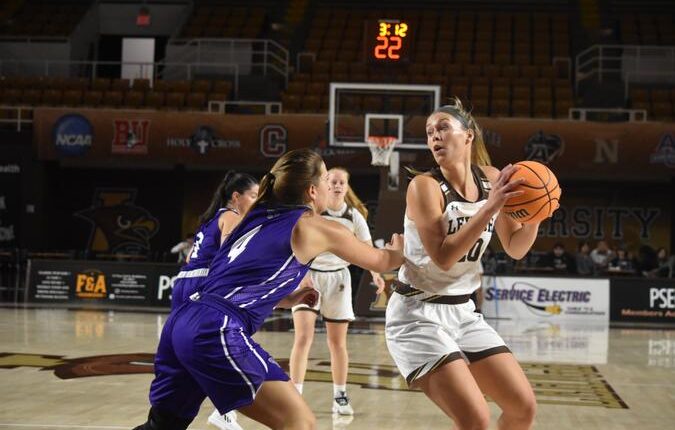 Senior Frannie Hottinger, who finished with a career-high of 18 rebounds, led the team with 21 points and also notched four steals. Junior Mackenzie Kramer finished behind Hottinger with 13 points.

“My teammates were really awesome with helping me get post touches,” said Hottinger. “I think they were a little undersized, so that’s always helpful when I’m able to play with other great posts like Meg and Jamie. They can kind of take some of the bigger players, and the smaller players are who I’m guarding , so it makes it easier, so I really appreciate that.”

Lehigh head coach Addie Micir picked up her first win in her debut as a head coach.

“I’m feeling great,” Micir said. “We talk a lot about the we here, and I’m just so excited that I got to have this moment with this whole team. There’s no group of people and staff that I would rather be here with. We competed hard, and that’s what our entire staff has asked the whole way, so couldn’t be more thrilled and excited. We’ll celebrate tonight then it’s on to the next one tomorrow.”

Lehigh’s defense was strong the whole night, limiting Stonehill to 15-of-62 from the field. The Mountain Hawks shot 32.9% from the field in tonight’s game, with half of their points coming from inside the paint.

“We really wanted to go inside,” said Micir. “That’s something we knew we had the advantage there, and it would be a really great way to start the season inside and out, and Frannie was a beast. She was an absolute beast, and our other post players held it down too.”

Lehigh also recorded eight blocks. Sophomore Meghan O’Brien led the way with three. Junior Maddie Albrecht and first-year Lily Fandre both had two and sophomore Kaylee Van Eps recorded one of her own.

The Skyhawks had three players who finished in double figures. Emily Bramanti and Mia Kelly both scored 11 points, while Maddie Loder finished with 10.

This was Stonehill’s first-ever game as a Division I program, after moving to the Northeast Conference from Division II.

The Mountain Hawks will now head on a two-game road trip, where they will first take on No. 23 South Dakota State on Friday at 8 pm EST and Minnesota on Sunday at 4 pm EST. It will be a homecoming for the six Lehigh women’s basketball players who hail from the land of 10,000 lakes.

Amid major federal investment in electric cars, it’s time for states to step up, advocates say